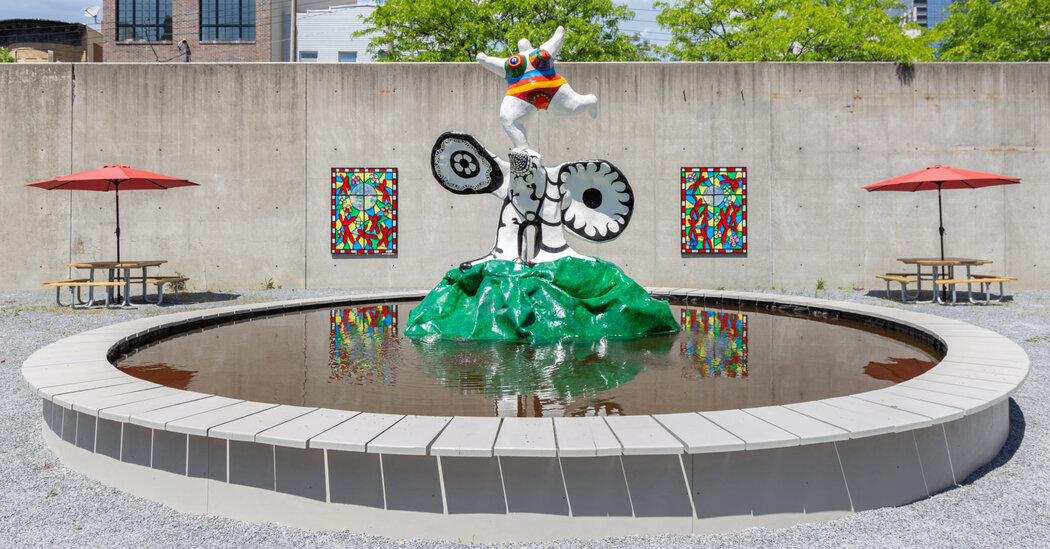 In 1997, the courtyard of MoMA PS1 became the main venue for Warm Up, a summer event that blended art, music and design to appeal to new audiences. But things are changing. Warm Up certainly hasn’t gone away, but last fall the PS1 Courtyard: An Experiment in Creative Ecology Institution launched, a program that tests outdoor spaces that encourage community engagement.

The initiative’s projects include a fountain by Niki de Saint Phalle, which is part of a larger exhibition at PS1 that closes on Monday, and Rashid Johnson’s “Stage”. Visitors are cordially invited to stand on the large yellow platform of their installation and freely use the five live microphones of different heights. By showing a microphone as a dynamic social tool, Johnson’s piece, which will be on view in the fall, shows the many things that a stage can represent: a place of protest, music-making, solidarity and, above all, the amplification of the voice.
MELISSA SMITH

Scenes from every season

The maximalist cinema event of Labor Day weekend is “Lawrence of Arabia”, which will be shown on 70 millimeter film in the Museum of the Moving Image on Saturday and Sunday. But for a minimalist alternative, try Eric Rohmer’s Tales of the Four Seasons – four feature films, each set in a different season and the most conversational French new wave director, Rohmer, from the late 1980s to the late 1980s Released in the 1990s. (Taken together, the running times amount to about two screenings of “Lawrence of Arabia”.) With the change of the season, the Filmforum will show all titles separately from Friday to September 9th.

Seeing them in tandem shows how Rohmer – on the surface so consistent and serene – subtly plays with structure and variation and recombines character types in friendships and romances that rarely develop as expected. The most summery is of course “A Summer’s Tale”. Melvil Poupaud plays an anti-bond vacation in Brittany that somehow juggles with an overabundance of commitments to women.
BEN KENIGSBERG

In 1971 trumpeter Charles Tolliver and pianist Stanley Cowell founded Strata-East, a record label that gave artists creative freedom and relative commercial control, in search of refuge from an exploitative, increasingly commercialized jazz industry. Although short-lived, Strata-East inspired black musicians in other cities to undertake similar efforts. And it captured a moment: Almost every Strata East album simmers in the heat and tension of the Black Power era, delivers short, syncopated rhythms and pushes jazz linguistics into a more economical, confrontational zone.

Cowell died last year after a prolific career, but Tolliver, 79, continues to perform. At Birdland he will be celebrating the 50th anniversary of the label with an ensemble of all-stars, including some who recorded on Strata-East in the 1970s: tenor saxophonist Billy Harper, pianist George Cables, bassist Buster Williams and the Drummer Lenny White. Sets are at 7 p.m. and 9:30 p.m. The Late Show on Saturday, which will also be broadcast live on dreamstage.live, will be hosted by legendary bassist Cecil McBee and moderated by actor Danny Glover.
GIOVANNI RUSSONELLO

Even workaholics know they should take it easy this weekend, and workaholics fans will recognize the headliner at Carolines on Broadway by Saturday: Erik Griffin, who played Montez Walker on the Comedy Central sitcom. Griffin also played a stand-up in I’m Dying Up Here, a dramedy about comedy in the 1970s on Showtime, where you’ll find two of Griffin’s comedy specials. At Carolines he will perform one sentence on Thursday and Friday at 7 p.m. and on Saturday two sentences at 7 p.m. and 9:30 a.m. Tickets start at $ 31.25.

On Sunday at 7 am and 9:30 am, Carolines will welcome Rosebud Baker, who published her debut special “Whiskey Fists” on the Comedy Central Stand-Up YouTube channel in August. Tickets are $ 27.25 and up.

There will be a minimum of two drinks at each show.
SEAN McCARTHY

That’s how they roll

In New York, casual basketball games are as common as strutting pigeons. But the contest, scheduled for Saturday at 11 a.m. in the Bronx, should cause quite a stir, not to mention spinning the bike.

Then the King Charles Unicycle Troupe plays – while driving their favorite vehicles – on the basketball court of the Clinton Playground in Crotona Park. (Enter Clinton Avenue and Crotona Park South.) These guys are a popular local circus act and can double Dutch skipping rope jump on one wheel too.

Their show is a highlight of the 12th annual NYC Unicycle Festival, a free outdoor celebration presented by the Bindlestiff Family Cirkus. The celebrations also include group long-distance trips on Thursday, Friday and Saturday, in which experienced young unicyclists can take part in the company of an adult. (See the festival website for details.) Experienced riders can also take part in a post-performance pickup game with the King Charles players on Saturday, along with a free throw basketball competition and unicycle obstacle course.

However, neophytes can do more than just watch. On Sunday from 1 p.m. to 5 p.m., the festival ends at Grants Grab in Morningside Heights with lessons and youth-friendly equipment for children who want to give unicycling a chance.
LAUREL GRAVE