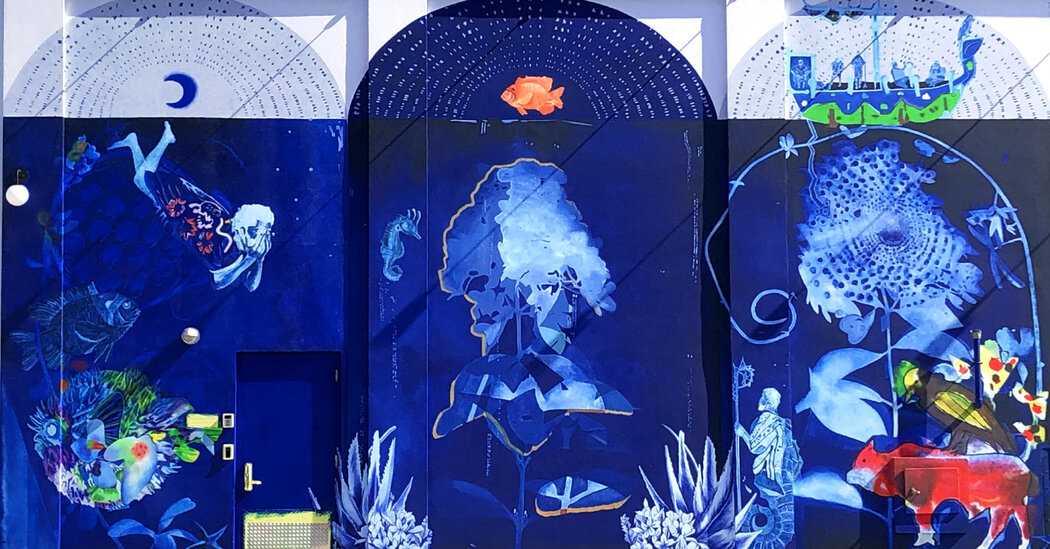 Over the years, Rockaway Beach has earned the award as a synonym for resilience. Knowing this, Ivan Forde recently painted Seascape With the Fabulous Plant of Rejuvenation in the Abzu, a 5 by 90 meter mural on the corner of Rockaway Beach Boulevard and Beach 108th Street on the facade of the Rockaway Hotel. The work symbolizes “rejuvenation for NYC after the pandemic storm,” he said in a personal statement on his website.

Forde centered the cyanotype on the Mesopotamian poem “The Epic of Gilgamesh,” adding visual references to traditional healing elements associated with his own Guyanese heritage and that of the Lenape, the indigenous peoples who lived in the Rockaways centuries ago.

Created in partnership with Baxter Street CCNY and supported by the 7G Foundation and Facebook Open Arts, the Forde mural, which will be on view through the fall of 2022, is part of a series of public art initiatives the Rockaway Hotel aims to showcase to promote the feeling of renewal to pay tribute to the eventful past of the region.
MELISSA SMITH

Japan Cuts, the Japan Society’s annual survey of predominantly contemporary Japanese cinema, will again offer in-person screenings this year – at least for a handful of titles. Eight features will be shown in the theater from Friday to September 2nd. Some will be shown in the Society’s virtual cinema, film.japansociety.org, where additional titles will also be available to stream.

One possible discovery on the opening weekend is Yukiko Sode’s “Aristocrats” (screening on Saturday and August 26), a structurally surprising study of class stratification in Tokyo. Hanako (Mugi Kadowaki) wants to marry into a political family after a failed engagement.

The heart of Japan Cuts is a sneak preview of Kiyoshi Kurosawa’s beautiful World War I drama “Wife of a Spy” (screening on August 27 and online from Friday). The film, which opens in September and won the directing award in Venice last year, revolves around a woman in Kobe (Yu Aoi) who suspects her secretive husband (Issey Takahashi) and his business trip to Manchuria.

For theatrical performances, those present must wear masks and provide proof of vaccination.
BEN KENIGSBERG

The whole zoo is a stage

Some of the animals at the Bronx Zoo this summer are creatures you’d rather find in the local library, including a blue horse and a very famous – and very hungry – caterpillar.

They are the creations of Eric Carle, the popular children’s author and illustrator who died in May. Set at the zoo Friday through Sunday through August 29, Eric Carle’s World of Wildlife features many of the same giant, intriguing dolls that Rockefeller Productions previously featured in its anthology The Very Hungry Caterpillar Show.

Now, however, the company is presenting four stories separately, all free with zoo entry (tickets must be reserved in advance): “The Very Hungry Caterpillar” in Giraffe Corner; “Brown Bear, Brown Bear, What Do You See?” And “The Artist Who Painted a Blue Horse” in Grizzly Corner; and the American premiere of “The Very Busy Spider” at Astor Court. After the 15-minute shows, which start at 11 am and run at different times of the day – the last one starts at 4 pm – there is an opportunity to get to know the cast.

Visit on other days of the week? Be sure to see the zoo’s own Wildlife Theater troupe in shows about butterflies, bears and beetles.
LAUREL GRAVE

The Upright Citizens Brigade Theater is no longer stationary in New York, but its long-standing, popular showcase on Sunday evening, ASSSSCAT, has found a new home at Caveat, with one caveat: it is now called RaaaatScraps.

This newly named troupe enlivens ASSSSCAT’s improvisational format, inspired by anecdotes from a celebrity (when Raaaatscraps opened his residence at the Caveat on August 1st, Janeane Garofalo was his guest storyteller). Organized by Shannon O’Neill, and presented by the Squirrel Theater, the show features a rotating cast that includes two Squirrel board members – Michael Hartney and Corin Wells – and actors you can recognize by their scene-taking television roles such as Zach Cherry, Connor Ratliff and Peter Grosz.

This week’s star monologue will remain a surprise, but you can find out on Caveat or by livestreaming the performance, taped in Multicam HD, on Sunday at 7:30 p.m. door and $ 8 to access the stream. People who are present in person must show a vaccination card.
SEAN McCARTHY

An oasis of sound

Little Island, the man-made park and amphitheater off Manhattan’s Pier 55, has breathed new life into the pandemic art scene, thanks in particular to its month-long festival of public concerts titled NYC Free. While the music program is broad, the performances this weekend are full of world-class jazz talent. One of the highlights on Friday is a performance at 9.15 p.m. by Magos Herrera, a Mexican-American singer who oscillates between jazz, experimental classical music and Latin American folklore.

On Saturday at 7.30 p.m., the MacArthur award-winning saxophonist Miguel Zenón, whose quartet will perform excerpts from his homage to the famous Puerto Rican singer Ismael Rivera, as well as the virtuoso singer Cécile McLorin Salvant and the pianist Sullivan Fortner, both Grammy winners, will provide star power on Saturday playing in a duet at 9:15 a.m.

The program on Sunday includes a show by the versatile pianist Miki Hayama at 6:30 p.m. and a series of student performances from 8:45 a.m., presented by the Afro-Latin Jazz Alliance. Reservation lists for certain shows are full, but there are vantage points all over the park to see the stage. Visit littleisland.org for more information.
GIOVANNI RUSSONELLO