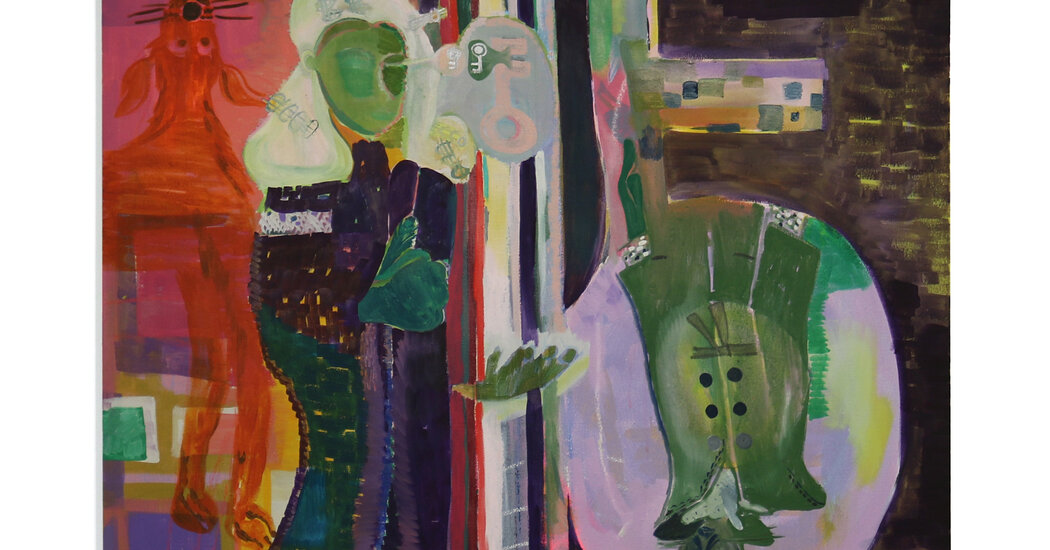 Gerald Jackson and Daisy May Sheff

In its combination of big and small shows, White Columns has come up with some extraordinary combinations, but this one is particularly good. The larger exhibition introduces the experienced artist and poet Gerald Jackson in his mid-80s, whose work was fearlessly multimedia long before it got down to business. The smaller show “A Mountain Girl with Sky-Blue Teeth” is the New York debut of a young painter, Daisy May Sheff, whose complex fantasies exude an overheated fauvism of oranges, pinks, purples and greens populated by eccentric personalities – all in one style best described as the liquid state Florine Stettheimer.

Jackson’s abstract paintings were shown in an exhibition at Kenkeleba House last fall and will also be featured in an exhibition at Gordon Robichaux this fall. The White Columns presentation explores his ubiquitous use of collage in two or three dimensions. Five large pieces alternate words, either red / black in one case or white / black in others, written in large letters on separate sheets of writing paper, which are then glued into wrinkled grids. The words jump in and out of focus, in seemingly alternating but actually unpredictable rhythms. Three imposing collages – two of which say “Divine Providence” – combine enlarged photocopies of magazine images (including portraits of the artist) with bolder color names as well as handwritten poems and motifs from Egyptian art.

The highlight of the show consists of four jacket-trouser ensembles that Jackson purposefully decorated with stencils, paint, applied embroidery or larger pieces of fabric, patterned or solid. Multicultural in their references and dazzling in their colors, these garments suggest a global sophistication. They are made for citizens of the world.

The complexity of Jackson’s distinctive garments underscores the composition of Sheff’s larger compositions with their collections of different objects, patterns, characters and scenes nominally united by color.

Nigerian-American artist and poet Precious Okoyomon, using the pronoun “she / she” creates large environments that evoke fantastic landscapes. Last year they staged “Earthseed” at a museum in Frankfurt that showed live kudzu, a plant that was introduced to the American South to prevent soil erosion caused by over-cultivation of cotton by enslaved people was cared for, was devastated. For “Fragmented body perceptions as higher vibrational frequencies for God” in the Performance Space New York, Okoyomon took the same kudzu, burned it and installed machines to blow the ashes over a sculptural environment that includes artificial boulders and real moss, gravel and earth couple of ladybugs and crickets.

The overall effect is impressive. Red light, a brooding soundtrack and the mossy faux landscape conjure up Gothic stories, film sets and haunted houses. Beyond the first impressions, however, the work is a compilation of land art, earthworks, installation and sound art with weak links to history and black trauma.

According to the exhibition’s press release, the project is an “ecosystem that wants to hold back mourning” after the “brutal mood of the apocalypse and rapture” last year. For me, however, so many other situations – ad hoc altars at protests and vigils, press conferences, and the removal of racist statues and memorials – provided far more powerful spaces for mourning, grief, and rapture in the community while I recognized how much work there is be done.

For years, the sculptor Damien Davis has been making graphic representations of cowrie shells, African masks and other symbols of black identity from laser-cut sheets of colored acrylic. He combines seashells, masks and other shapes with stainless steel screws, chains and hinges and creates three-dimensional collages that can be mounted on a wall, propped up like a book or hung from the ceiling.

It’s always been a shrewd approach that provides a living metaphor for the way symbols change meaning and context over time. But “Weightless,” the artist’s first solo show with Mrs. Gallery, dramatically expands the project, using a wider range of colors, patterns, and references. A number of small acrylic faces play with the similar silhouettes of high-top fade hairstyles and ancient Egyptian crowns. an intricately cut piece of plywood alludes to a willow throne on which the leader of the Black Panther, Huey P. Newton, was once photographed; and a number of mask-like collages feature a white space shuttle shape as a background or some sort of headdress. (The show was inspired by the astronaut Mae Jemison, the first black woman in space.)

The tension in these intricate new pieces between easy-to-read components and difficult-to-analyze overall compositions is visually captivating. It’s also conceptually important: it reinforces the feeling of an American moment, the details of which cannot be reconciled, when a Black can become president, but also has a very real chance of being killed by the police.

Beverly Buchanan (1940-2015) has received a lot of attention for her larger concrete sculptures and her “Marsh Ruins”, which were erected in 1981 at a location on the Georgia coast where 75 Igbo people drowned together to avoid enslavement in 1803 . The work in her new show “Beverly Buchanan: Shacks and Legends, 1985-2011” by Andrew Edlin is smaller and artisanal and celebrates the native architecture among the rural people of the American south.

Many of the table-size sculptures made from wood, glue, tin, and foam resemble real houses. Enlarged photographs by the artist underline this connection. “Esther’s Shack” (1988) is a simple brown structure reminiscent of a photographed house like “Madison, Georgia” (1991). Handwritten “legends”, which are shown in showcases or mounted on the wall, describe the history of individual huts.

Some of the other huts can easily be compared to modern sculptures. (In her days in New York, Buchanan was mentored by two heavyweights of modern art: Norman Lewis and Romare Bearden.) The flaming red and orange box “House” from around 1985 and the austere “Turned Over House” (2010) are like minimalist studies, while the exciting “Orangeburg County Family House” (1993), adorned with buttons, bottle caps and a license plate, is an expressionist confectionary. Throughout the show, however, the message is clear: Art doesn’t just belong to city dwellers or the wealthy. Huts designed with ingenuity, warmth and soul prove this.

The land is dazzling pink, purple, and teal in Richard Mosse’s brave aerial photographs of the Brazilian Amazon. Elsewhere, it recedes into familiar greens and browns, but with tone effects that show both the advanced technology used to capture these images and the artist’s sizable compositional role in manipulating them.

The locations are mainly points on the “arc of fire” from Rondônia in the southwest to Pará in the north, where fires clear the rainforest for arable land in the dry season. In 2019, these fires reached a ten-year peak and caused worldwide consternation. Mosse, who is Irish and lives in New York, soon traveled to Brazil, equipped with a multispectral camera mounted on drones that detects nuances in the soil, in the state of plants and much more outside the human eye.

Now at the Jack Shainman Gallery, his finished paintings are large – a triptych of the Crepori River in the Amazon basin spans nearly 15 feet – and the effect is magnetic. The eye decodes the landscapes: dull knobs from felled trees; a pond in red, full of lines that are actually caimans; a suddenly well-organized zone – a cattle feeding place. In the omnipresent sense of seepage and fragility, Mosse elegantly achieves a central goal of his work, namely to convey world-changing phenomena beyond the limits of documentary photography.

The technology is used here by both scientists working for nature conservation and agro-industrial conglomerates who are undermining it. In previous projects, Mosse has used thermal sensor monitoring tools to photograph migrants and refugee camps, and old military infrared films to document the war in the Democratic Republic of the Congo. The methodology can be a little scary, but also revealing. Up close, which depicts human motives, his work has sometimes become garish. Here, however – despite the serious title “Tristes Tropiques”, which refers to the dated anthropology classic by Claude Lévi-Strauss – the work gains from the heights and becomes a welcome project in critical cartography.