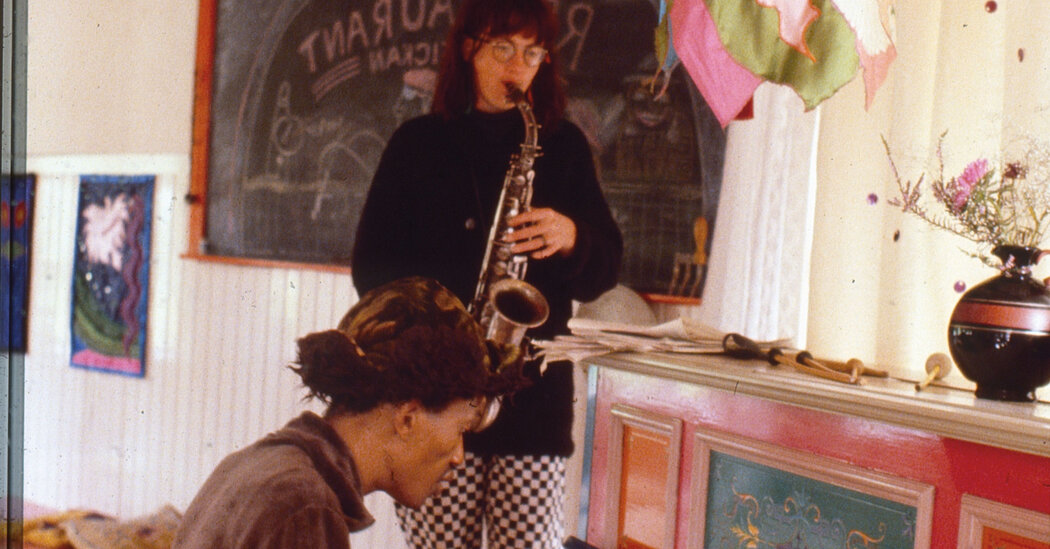 In the mid-20th century, a steady stream of American jazz musicians flew to Europe to abandon the restrictions and prejudices of their homeland for a continent where it seemed possible to earn a decent living as an artist.

For the well-known trumpeter and multi-instrumentalist Don Cherry, who settled in Sweden in the late 1960s after spending years in New York as one of the leading figures of avant-garde jazz, life in Europe also offered more. Here he began to share an artistic practice with the fashion designer and textile artist Moki Karlsson (later Moki Cherry), whose career would be intertwined with his. It was also a launch pad for other places: Turkey, Morocco and countries further south, each with their own artistic traditions to discover.

Europe was also a place where Moki and Don – with just enough public support and surrounded by a community of like-minded artists – could experiment on what they termed “organic music”. From the late 1960s, the couple taught for about 10 years, mostly in an abandoned schoolhouse they bought in the southern Swedish town of Tagarp. It taught classes, gave concerts, hosted friends and co-workers from around the world, and did work.

The Cherrys’ joint project in these years is at the center of an impressive, multi-part celebration by Blank Forms, an arts organization in Brooklyn whose little employees spent years putting together the previously unclear strands of Moki and Don Kirsch’s life, their now famous musician children: Eagle-Eye Cherry and Neneh Cherry. (Don Cherry died in 1995 and Moki in 2009.)

What Blank Forms produced – a gallery show mostly devoted to Moki’s artwork, a 500-page book, and two archival albums of Don’s performances from that period – shows how richly the musician had come to life during this period, which is often misunderstood as a footnote at his better-documented time on the New York scene, but arguably when he was doing his most thoroughly developed work. And it elevates the long-overlooked art of Moki Cherry, which for the distinctive creator she was, was never fully seen. (Her work will be the subject of a separate exhibition in Chicago later that year at the Corbett vs. Dempsey Gallery.)

The heart of the Blank Forms project is the book “Organic Music Societies”, available on Friday, which collects oral and visual history as well as critical writing and brilliant photographs of the couple’s milieu in Tagarp. A series of photos show the interior of their home, with Moki’s soft, wavy tapestries filling almost every corner, many of which are adorned with religious mantras.

Some of these tapestries are now on display in the small gallery of Blank Forms in central Brooklyn, along with paintings and drawings by Moki and Don, through June. One of her tapestries hangs almost from floor to ceiling, the words “organic music” are embroidered in an arch over two outstretched hands, a heart and a pair of wings.

By the time she was doing this piece, Don had begun converting his musical practice into education, with a series of adult masterclasses he led in 1968 at ABF House, an educational center run by the Swedish labor movement, which he brought together with folk musicians from all over the world World and asked them to teach their traditions. Experts in Turkish drumming, Scottish bagpipes and Indian singing technique gave lectures and participated in group performances.

In an interview with the writer Keith Knox from 1968, which is printed in the book “Organic Music Societies”, Don Cherry explains his intentions. “The first and foremost is the sensitivity of the sound,” he said, telling students to watch out for “ghost noises” or unexpected resonances and rhythms that might arise while making music.

“We find in these studies that we can really evolve within ourselves by contradicting what we have been taught to get to our inner expression, which the forms of the Western system do not,” he added.

In his introduction to the book, Lawrence Kumpf, the artistic director of Blank Forms, writes that Moki and Don Kirsch’s projects together “have taken Don’s music out of exploitative and commercial jazz circles and integrated it into a total art and life project that has broken away from him Convention. “

Although Don Cherry has declared that he loathes politics, there is an element of radicalism here – in what he disapproves as well as in what he does. Naima Karlsson, the granddaughter of the Cherrys who worked with Kumpf to put the book and exhibition together, said Moki and Don approached activism through the lens of religion, much like John and Alice Coltrane, and by bringing people together . “In Buddhism, you can make big changes by helping other people – by changing other people’s lives,” she said in an interview. “They really thought that through their artistic collaboration they could reach people on another level in their creative and artistic life.”

Don Cherry is not generally remembered in this way. Born in Oklahoma to a black father and a Choctaw mother, Cherry rose to fame as a member of the free-improvising Ornette Coleman Quartet that turned New York City upside down with the release of The Shape of Jazz to Come in 1959 -weekly run in the Five Spot Café. For Coleman, Cherry was partly foil, partly brotherly twin: As a harmoniously-minded improviser in a group that had left chord structures, the trumpeter alternated calmly between hasty phrases and long, patient notes. A little less evasive than Coleman’s, his playing – on the thin-sounding pocket trumpet, Kirsch’s signature – was just as playful.

You can draw a line in a direction from this work to “Cherry Jam,” an EP from an unearthed radio show from 1965 in Denmark that was released on Gearbox Records earlier this year. It shows him swinging through a range of melodies with a local rhythm section, constantly leading his bandmates into crooked surprises, all in the context of mainstream jazz.

But it was also moving the other way. On his world tours in the mid-1960s – first to Europe as a member of Sonny Rollins’ group, and then to Turkey and Morocco, where he spent time with the master musicians of Joujouka – Cherry began to understand how liberated he was from training with Coleman could be used to unlock affinities between all types of music. He started playing drums and piano more and singing more.

This phase was just beginning to bloom when he recorded the first of two albums Blank Forms will release in June. “The Summer House Sessions” was done on an island outside Stockholm in 1968 when Cherry was teaching classes at the ABF facility. The music here is a result of those sessions that bring together musicians from Sweden, Turkey, France and the USA. With two saxophonists, two bassists and three drummers, the group is really a combination of different bands that Cherry had led in New York and Sweden.

The buglers exchange all of the themes and motifs in a star from high-speed improvisations that sometimes come together in contiguous, beboppic lines, like an ornate cluster thrown together on the roof of a fast-moving car.

The other album, “Organic Music Theater”, features the first performance that Don and Moki gave under that name in 1972. Years earlier, the couple had started putting on interdisciplinary shows called Movement Incorporated, with Moki’s tapestries including a diverse cast of musicians, dancers, and puppeteers (Moki also played the tanpura, a booming Indian string instrument). Later in 1972 they incorporated the Organic Music Society, an underrated gem in Don Kirsch’s career, which transformed global folk music into a kind of unified vernacular.

Don mixes time signatures and scales from Turkey, South Asia and parts of Africa on “Organic Music Theater”, which is led by a five-piece band that also includes the Brazilian percussionist Nana Vasconcelos. Since he leads the group singing a ballad (“Butterfly Friend”) and then pulls them into a clattering chorus of falsetto screams (“Elixir”), it is impossible to tell which voices are coming from the stage and which are in the audience. Everyone, it seems, is singing – and everyone is listening.