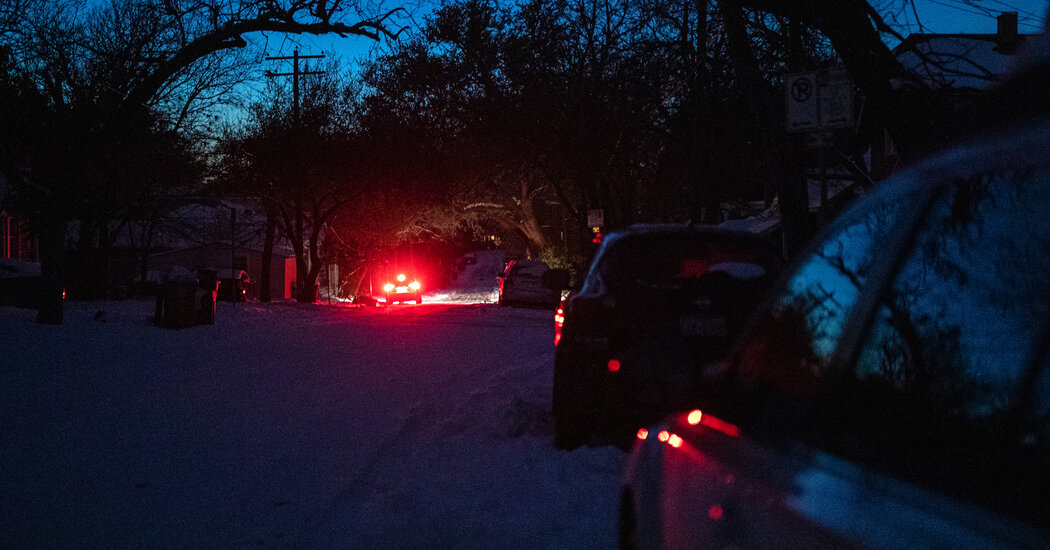 Huge winter storms this week plunged large parts of the central and southern states of the United States into an energy crisis as freezing explosions of Arctic weather crippled power grids and left millions of Americans without power in dangerously cold temperatures.

Analysts have begun to identify some key drivers of the Texas power outages. Record-breaking cold weather spurred residents to crank up their electric heaters and pushed the demand for electricity beyond the worst-case scenarios planned by the network operators. At the same time, many of the state’s gas-fired power plants were shut down in icy conditions, and some facilities appeared to suffer from fuel shortages as natural gas demand rose across the country. Many of the wind turbines in Texas also froze and stopped working, although that was a minor part of the problem.

The resulting blackouts forced the grid operators in Texas to impose rotating blackouts on households and businesses from Monday to prevent the system from collapsing again. Separate regional grids in the Southwest and Midwest are also under serious strain this week.

The crisis has highlighted a deeper warning for power systems across the country. Power grids can be designed for a variety of difficult conditions – as long as grid operators can reliably predict impending dangers. As climate change accelerates, many power grids will be exposed to new and extreme weather events beyond the historical conditions for which these grids were designed and which will expose systems to catastrophic failure.

Building power grids that are resilient in the face of increasingly wild and unpredictable weather will be a huge challenge, experts say. In many cases, it can be expensive, although, as Texas shows, the cost of a power outage can also be extremely costly.

“It’s basically how much insurance you want to buy,” said Jesse Jenkins, an energy systems engineer at Princeton University. “What makes this problem even more difficult is that we are now in a world where the past, especially in the face of climate change, is no longer a good guide to the future. We need to be much better prepared for the unexpected. “

A grid that reaches its limits

Texas’ main power grid, operated largely independently of the rest of the country, is primarily designed to handle the state’s most predictable weather extremes: rising summer temperatures that spur millions of Texans to turn on their air conditioners at once.

While the freezing weather is rarer, Texas grid operators have long known that electricity demand can rise even in winter, especially after severe cold spells in 2011 and 2018 that caused millions of Texans to turn up their electric heaters and put a strain on the system.

But this week’s winter storms, which buried the state in snow and ice and led to record-breaking temperatures, exceeded all expectations – and brought the network to its breaking point.

The Texas network operator had expected that in the worst case, the state could need 67 gigawatts of electricity to cope with a winter summit. By Sunday evening, however, the electricity demand had risen to over 69 gigawatts. As temperatures dropped, many households relied on older, inefficient electric resistance heaters that used more electricity.

The problems worsened from then on when the cold weather put the power plants with an output of more than 30 gigawatts out of operation until Monday evening. The vast majority of these failures occurred in thermal plants such as natural gas generators as falling temperatures crippled plant operations and the increasing demand for natural gas across the country struggled for some plants to obtain fuel. Some power plants in the state were also offline for scheduled maintenance in preparation for the summer summit.

At times, the state wind farm fleet also lost up to 5 gigawatts of power because many turbines froze under icy conditions and no longer worked.

“No one model of the power system was that all 254 counties of Texas would be exposed to a winter storm warning at the same time,” said Joshua Rhodes, an expert on electrical systems for the state at the University of Texas, Austin. “It puts considerable strain on both the electricity network and the gas network, which feeds both electricity and heat.”

According to experts, in theory there are technical solutions that can avert such problems. However, installation can be costly and the difficulty is in predicting exactly when and where such solutions will be needed.

However, all of these solutions cost money, and carriers are often cautious about forcing consumers to pay additional fees for protections if they don’t believe they are needed.

“There is often a cost to building resilience, and the risk of underpaying as well as overpaid,” said Daniel Cohan, associate professor of civil and environmental engineering at Rice University. “It’s a difficult balancing act.”

In the coming months, as Texas grid operators and policy makers investigate this week’s winter storm, they may wonder how and if the grid could be boosted for extremely cold temperatures. Is there an outdated infrastructure that urgently needs to be repaired? Would it make sense to create more connections between the Texas power grid and other parts of the country to balance the power supply – a move the state has long resisted? Should homeowners be encouraged to install expensive backup batteries or more efficient heat pumps that use less electricity? Should the state’s electricity markets be optimized to keep additional power plants in reserve?

One difficulty is that climate change makes preparation difficult. Overall, as global temperatures rise, the state will become warmer, and extreme cold weather extremes will on average become rarer over time.

However, some climatologists have also suggested that, paradoxically, global warming could lead to more winter storms like those seen this week. There is some research to suggest that the warming of the Arctic is weakening the jet stream, the high airflow that orbits northern latitudes and usually holds back the cold polar vortex. This allows the cold air to escape south, especially when additional warming hits the stratosphere and deforms the vortex. The result can be episodes of falling temperatures, even in places that are rarely choked by frost.

However, this remains an active topic of discussion among climate researchers, with some experts being less certain that polar vortex disturbances are becoming more common. This makes it even more difficult for network planners to anticipate the dangers ahead.

Across the country, electricity utilities and network operators are facing similar issues as climate change threatens to exacerbate heat waves, droughts, floods, water scarcity and other disasters, which could create new and unforeseen risks to the country’s electricity systems. Dealing with these risks will come at a high price: a recent study found that the Southeast alone may need 35 percent more electrical capacity by 2050 to deal with the known dangers of climate change.

And the task of building resilience is becoming more and more urgent. Many policymakers are increasingly promoting electric cars and electric heating to curb greenhouse gas emissions. However, as more of the country’s economy depends on reliable electricity flows, the cost of outages keeps getting higher.

“This is going to be very challenging,” said Emily Grubert, Georgia Tech electrical systems expert. “We have to decarbonise our power systems so that climate change doesn’t get worse, but at the same time we have to adapt to changing conditions. And the latter alone will be very costly. We can already see that the systems we have today don’t handle this very well. “

John Schwartz contributed to the coverage.