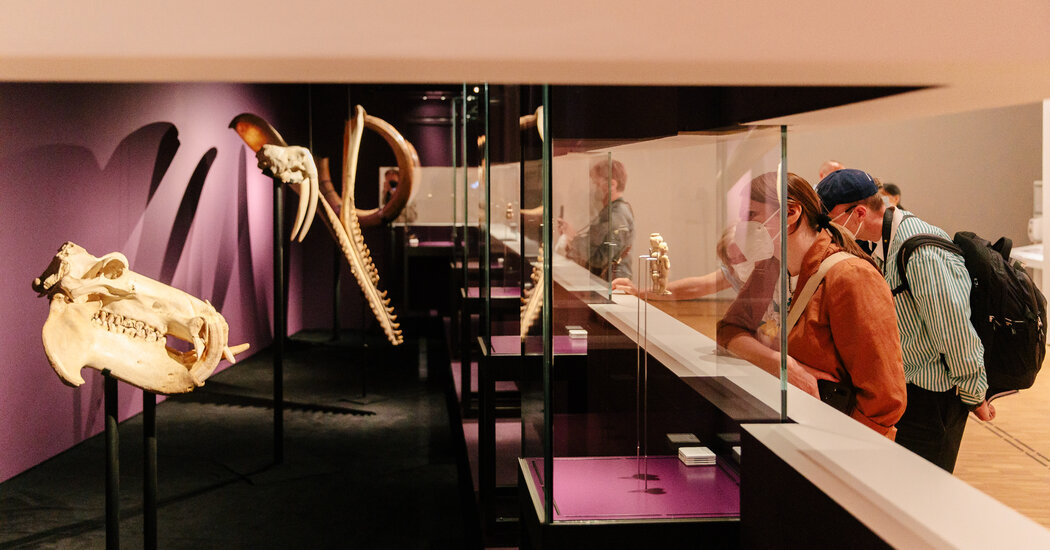 BERLIN – Werner Kohl has been following the saga of the Humboldt Forum for almost 20 years. Like many Germans, he has been listening and seeing since 2002 when the government approved a plan for the huge new cultural attraction in Berlin. That’s nearly two decades of debate, protest, spending and delays.

So he was thrilled on Tuesday evening when he finally stood in the darkened exhibition rooms of the building, he said.

“I was looking forward to this day from the start,” said Kohl. “I’m here to see if it holds up what it suggested.”

Located on the site of the demolished GDR parliament and designed as the German counterpart to the Louvre, the Humboldt Forum was originally supposed to open in 2019, but construction was delayed. It will now open in stages over the next two years.

In addition to the ivory exhibition, the Humboldt Forum is presenting an exhibition entitled “Berlin Global” on the relationship between the city and the world; a conceptual show examining human life after climate change; and rooms dedicated to the history of the place.

The most controversial area of ​​the forum has yet to be opened: floors filled with thousands of ethnological artifacts from different cultures, including a spectacular African throne and huge wooden boats from the South Pacific, many of which were acquired during Germany’s imperialist expansion phase. Anti-colonial activists argued that the Humboldt Forum had not gone far enough in determining the provenance of its objects.

In an agreement negotiated in the spring, a large part of the Berlin collection of Benin bronzes that was to be exhibited in the building is to be returned to Nigeria next year. But the process of deciding what the forum to do with articles with ambiguous histories is likely to be a messier endeavor. On Tuesday, a group of anti-colonial demonstrators gathered outside and chanted slogans such as “Defund the Humboldt Forum”.

This week’s opening is the first opportunity for curators to present what they believe to be forward-looking and inclusive artifacts with colonial associations to a wide audience.

Although the Humboldt Forum held its official opening ceremony online in December, it remains closed to the public due to the pandemic restrictions. Some have argued that the extended shutdown may have been to their advantage, as it gave administrators more time to resolve some of the technical issues on the $ 825 million building.

In May, the Süddeutsche Zeitung quoted a confidential memo from the project’s site manager, Hans-Dieter Hegner, stating that the systems for controlling the air conditioning and the building’s security alarms were “still in very poor condition” and that there are still flaws “Endanger the already installed cultural assets”.

The director of the Humboldt Forum, Hartmut Dorgerloh, said in an interview last week that he is very aware of the delicacy of some ivory items, which require careful monitoring of temperature, humidity and light and can develop cracks if conditions are too rapid. “From a nature conservation point of view, it’s challenging,” he said. “For the first time we are showing objects that are 40,000 years old in Berlin, in a building that has existed for less than 10 years.”

However, he emphasized that the air conditioning in the exhibition area was fully functional and that no objects were at risk. “The climate in this area is very stable,” he said.

Dorgerloh said the show was an appropriate opening for the Humboldt Forum because it reflected its goal of “creating a space in which we can exchange experiences” and not just depicting cultures.

The exhibition with around 200 exhibits – including numerous spectacular pieces of jewelry, artistic sculptures and one of the oldest surviving musical instruments in the world, an ivory flute – was organized in cooperation with the National Museums of Kenya, among others. In a dramatic way, the room has been painted red and punctuated by speakers playing the breath of a dying elephant. In addition to the ivory objects, artifacts depicting colonial exploitation and abuse can also be seen, as well as video monitors with interviews with people whose lives have been affected by the ivory trade, including a Kenyan park ranger and a safari guide.

Alberto Saviello, one of the three curators of the exhibition, said in an interview that it is important to his team to include voices from the objects’ countries of origin and the responsibility to tell the stories of the objects, which “often deal with injustice and violence. ”

Saviello stated that while none of the institutions loaning items for the exhibition – including the Metropolitan Museum of Art in New York and the Victoria and Albert Museum in London – had concerns about the air conditioning in the exhibition space, there were some reservations about the critical tone the show. “We’re not doing this in a classical aesthetic context that emphasizes the beauty of the works,” he said. “There was a concern that we said, ‘If you flaunt ivory anywhere, it’s a crime.'”

Ultimately, according to Dorgerloh, the curators were able to convince concerned lenders with arguments about the educational significance of the exhibition.

Although the public interest in the exhibition is great and all visitor places are reserved until the end of the month, the reaction in the German media is mixed. The Süddeutsche Zeitung argued that the exhibition, which features artifacts made primarily in Europe, was an attempt to divert attention from the debate over the return of controversial items to be displayed in the building. The regional broadcaster RBB said the curators had brought a “striking, illuminating approach to a complex topic” and that the exhibition was “impressive in its diversity”.

The visitors were divided similarly. Nikolaus Sonne, 74, retired gallery owner, was impressed by the building, but disappointed with the exhibition. “These are incredible objects, but it’s too much at once,” he said.

“It might be better if they did a separate exhibition about all the bad things,” added Sonne.

Nika Goloma, 48, thought the concept of the show was well chosen. “So many people have talked about the forum’s colonial baggage,” she said, “and it shows that from the start they are not afraid to show it and say, ‘Take a look at it.'” She added, however : “I think they had no other choice.”