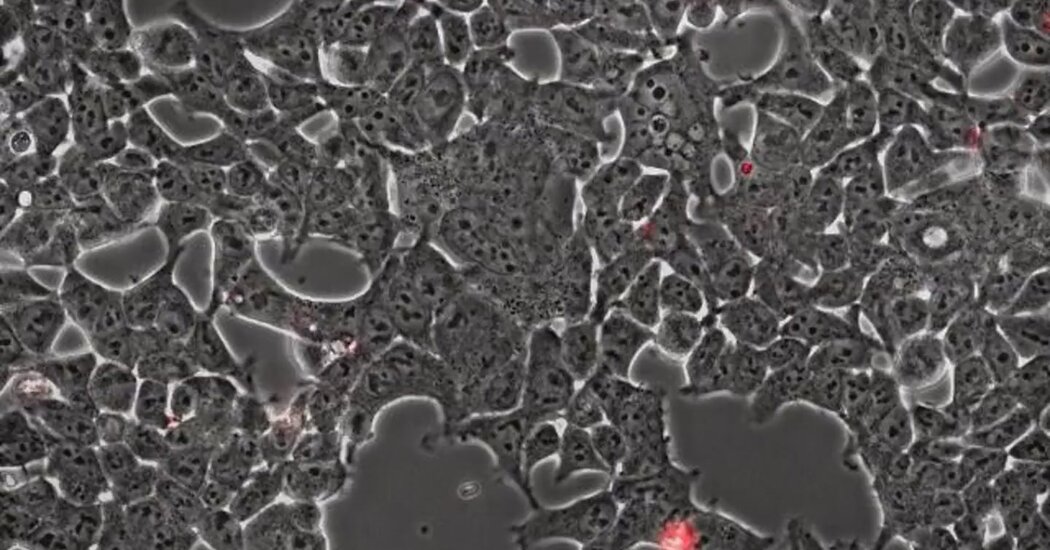 The intruder pursues its prey with stealth and precision, preparing to pierce its prey’s armor. Once inside, the attacker forces his host to produce more intruders and then detonates it, thereby emptying a multitude of intruders who can continue their rampage on a larger scale.

The drama, shown in a microscopic video of SARS-CoV-2 brain cells from bats being infected, offers a glimpse into how the pathogen turns cells into virus factories before killing the host cell.

The video was produced by Sophie-Marie Aicher and Delphine Planas, virologists at the Pasteur Institute in Paris, who received an honorable mention in a microscope video competition sponsored by Nikon, the photography company.

Filmed over 48 hours with a picture taken every 10 minutes, the footage shows the coronavirus as red spots circulating between a mass of gray blobs – the bat’s brain cells. Once infected, the bat’s cells begin to fuse with neighboring cells. At some point the entire mass bursts, which leads to the death of the cells.

Ms. Aicher, who specializes in zoonotic diseases – those that can be transmitted from animals to humans – said that this contagious juggernaut is the same in bats and humans, with one important difference: in the end, bats don’t get sick.

In humans, the coronavirus is able to evade detection and, in some cases, cause more damage by preventing infected cells from alerting the immune system to the presence of the intruders. Its particular power, however, is its ability to force host cells to fuse with neighboring ones, a process known as syncytia that allows the coronavirus to go undetected during its replication.

“Every time the virus has to leave the cell, there is a risk that it will be discovered. So if it can get directly from one cell to the other, it can work much faster, ”said Ms. Aicher.

She said she hoped the video would help demystify the virus and make it easier for people to understand and appreciate this deceptive archenemy who has turned billions of lives upside down.

“It is important to help people break through the scientific jargon to understand that this is a very sophisticated and clever virus that is well adapted to making people sick,” she said.