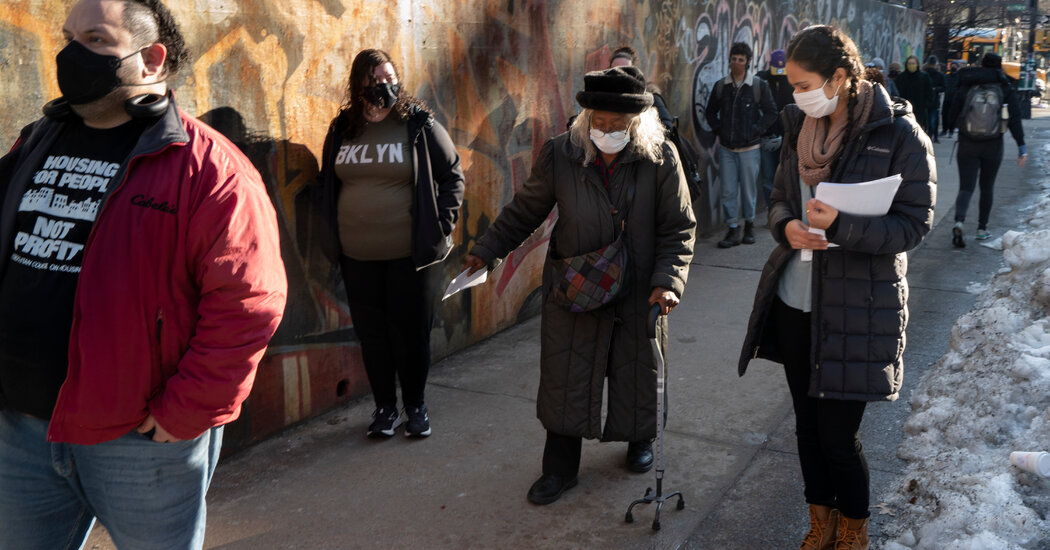 A new form of coronavirus is spreading rapidly in New York City and has a worrying mutation that can make vaccines less effective, two research teams have found.

The new variant, named B.1.526, first appeared in samples collected in the city in November. By the middle of this month, roughly every fourth virus sequence was in a database shared by scientists.

A study of the new variant, led by a group at Caltech, went online on Tuesday. The other, by researchers from Columbia University, is not yet public.

The study has not been peer-reviewed or published in a scientific journal. However, the consistent results suggest the variant’s prevalence is real, experts said.

“It’s not particularly good news,” said Michel Nussenzweig, an immunologist at Rockefeller University who was not involved in the new research. “But just knowing about it is good because then maybe we can do something about it.”

Dr. Nussenzweig said he was more concerned about the New York variant than the one that was quickly spreading in California. Another contagious new variant discovered in the UK currently affects around 2,000 cases in 45 states. It is expected to be the most widespread form of the coronavirus in the United States by the end of March.

Researchers looked at the virus’s genetic material to see how it might change. They examine genetic virus sequences taken from a small fraction of the infected in order to record the emergence of new versions.

Caltech researchers discovered the rise in B.1.526 by looking for mutations in hundreds of thousands of viral genetic sequences in a database called GISAID. “There was a recurring pattern and group of isolates in the New York area that I hadn’t seen,” said Anthony West, a computational biologist at Caltech.

He and his colleagues found that two versions of the coronavirus were more common: one with the E484K mutation seen in South Africa and Brazil, which is believed to help the virus partially evade vaccines; and another with a mutation called S477N that can affect how tightly the virus binds to human cells.

By mid-February, the two together made up about 27 percent of the viral sequences stored in the database in New York City, said Dr. West. (At the moment both are summarized as B.1.526.)

Columbia University researchers took a different approach. They sequenced 1,142 samples from patients at their medical center. They found that 12 percent of people with the coronavirus were infected with the variant that contains the E484K mutation.

Patients infected with the virus that carried this mutation were, on average, about six years older and more likely to be hospitalized. While the majority of patients were found near the hospital – particularly in Washington Heights and Inwood – there were several other cases scattered across the metropolitan area, said Dr. David Ho, director of the Aaron Diamond AIDS Research Center.

“We’re seeing cases in Westchester, the Bronx and Queens, lower Manhattan, and Brooklyn,” said Dr. Ho. “So it seems to be widespread. It’s not a single outbreak. “

The team also identified six cases of the variant that beat the UK, two infections with a variant identified in Brazil, and one case of the variant adopted in South Africa. The latter two have never been reported in New York City, said Dr. Ho.

University investigators have alerted New York state and city authorities as well as the Centers for Disease Control and Prevention, said Dr. Ho. He and his colleagues plan to sequence about 100 viral genetic samples daily to monitor the increase in variants.

Other experts said the sudden appearance of coronavirus variants was worrying.

“Given the involvement of E484K or S477N, coupled with the fact that the New York area has strong immunity to the spring wave, this is definitely a good thing,” said Kristian Andersen, a virologist at the Scripps Research Institute in San Diego, who did not participated in the new research effort.

The E484K mutation has appeared independently in many different parts of the world, suggesting that it offers a significant benefit to the virus.

“Variants that have an advantage will increase in frequency pretty quickly, especially as the numbers decrease overall,” said Andrew Read, an evolutionary microbiologist at Penn State University.

Several studies have now shown that variants containing the E484K mutation are less susceptible to vaccines than the original form of the virus. The mutation disrupts the activity of a class of antibodies that almost everyone makes, said Dr. Nut branch.

“People who have recovered from the coronavirus or who have been vaccinated are very likely to be able to fight off this variant, there is no doubt about that,” he said. But “they might get a little sick.”

They could also infect others and keep the virus floating around, which could delay herd immunity, he added.

However, other experts were a little more optimistic. “These things are a little less well controlled by vaccines, but they are no orders of magnitude less, which would scare me,” said Dr. Read.

As the virus evolves, the vaccines need to be tweaked, “but in the scheme of things this isn’t a huge concern compared to having a vaccine missing,” said Dr. Read. “I’d say the glass is three quarters full compared to where we were last year.”