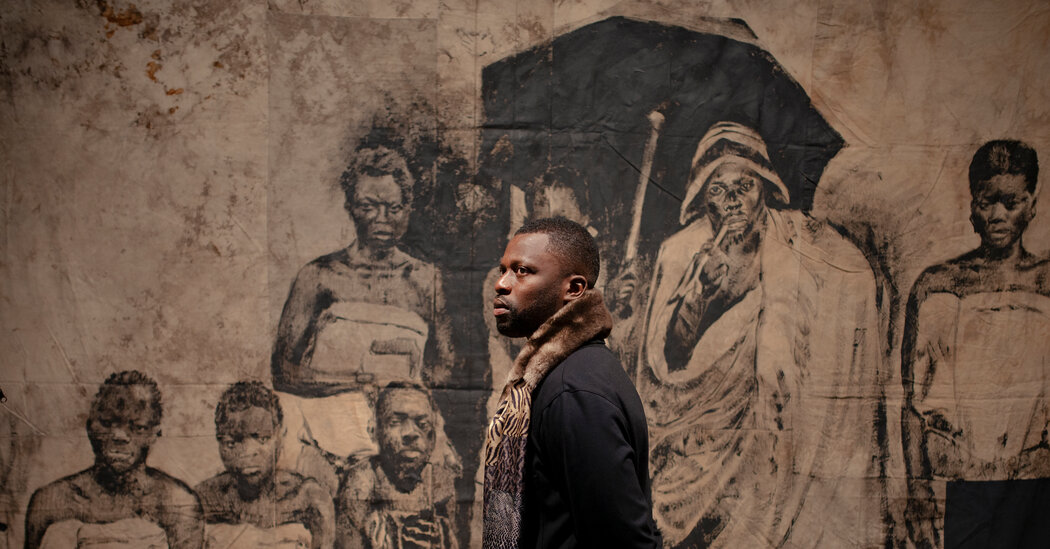 PARIS – Even the palace doors were ripped off their hinges and carted away. When French forces colonized the Kingdom of Dahomey in the 1890s, they overthrew the ruler, King Behanzin, and looted everything that remained: ornate thrones; ceremonial sceptres; half human, half animal statues. The priceless treasures ended up in museums in France.

Soon France will return 26 of these treasures to Benin, the West African nation that once housed the kingdom.

For a young contemporary artist, Roméo Mivekannin, this act of reparation has a deep personal meaning: he is King Behanzin’s great-great-grandson. Mivekannin, 34, grew up in Benin and now lives in France. He has started exploring his royal roots with a number of great paintings. They used strips of old sheets that were dipped in voodoo potions and then patched together. Instead of showing his ancestors at the height of his majesty, Mivekannin portrays the king as a fallen ruler who is exiled.

At a time in which France is confronting its colonial past, the artist examines the diverse possibilities with which this past has shaped its own identity.

“For France to return these treasures is a very meaningful gesture,” he said in a recent interview. “It is a way for France to reset its relations with the nations of Africa.”

The 26 royal artifacts – all housed in the Quai Branly Museum in Paris – are the first objects to return to sub-Saharan Africa since President Emmanuel Macron promised to return some of the 90,000 pieces in French museums in 2017.

To get them back, the French parliament had to pass special legislation, a laborious process that took two years. The logistics of the transfer, which according to the new law must take place in 2021, will be worked out by the government of Benin, a spokesman for Quai Branly said.

The return of the treasures is sure to polish King Behanzin’s legacy even further. According to Gaëlle Beaujean, who oversees the African collections of Quai Branly and wrote her doctoral thesis on the treasures of Dahomey, he is an important figure not only for his relatives but for people across Africa. Because the king led a powerful army of male and female warriors and adroitly allied himself with France’s rival European powers, “it took the French a long time to colonize Dahomey,” she said. When the French forces finally advanced on the Royal Palace at Abomey, he set it on fire and fled north to organize a resistance.

If he had ruled any other time, it would have lasted longer, said Beaujean. “Behanzin couldn’t rule properly because the Europeans dragged him into the colonial conquest of Africa,” she said. “He ended up in exile alone with a very small part of his family.”

His descendants ensured that his reputation stayed alive.

Mivekannin remembered his grandmother – the king’s granddaughter – praising Behanzin’s resistance to the French invaders. She described him as “a very intelligent man who would not show the Europeans the way,” said Mivekannin.

At the time, Mivekannin’s grandmother was leading a modern, urban life in Cotonou, Benin’s largest city. Still, she kept reminding the boy of his royal parentage, Mivekannin said. Visitors from Abomey greeted her royally, kneeling before her, and pressing her forehead to the floor. When the young Mivekannin asked about sneakers the way his friends wore them to school, he said his grandmother had told him he didn’t need them: he was a king and kings never wore what normal people did.

Mivekannin was sent to France to finish secondary school in 2004 and faced a completely different reality. For the first time, the color of his skin made him feel like an outsider. He said people viewed him as a member of an entirely different social category – one of blue-collar workers, immigrants, childcare workers and domestic workers.

After studying architecture in Toulouse, the city in southern France where he now lives with his wife and son, Mivekannin started sculpting before switching to painting. His first works were abstract and he said he was shocked by the reaction of a French gallery owner. The man said, ‘You are black. This is modern art. Why don’t you tell your own story “He remembered. “I took it very badly, packed my artwork and went out. I felt like I was reduced to the color of my skin. “

“Then I realized that you need to grapple with your own story before you can go ahead and do anything else,” he said.

Mivekannin found inspiration in an exhibition in 2019 at the Musée d’Orsay in Paris: “Black Models: From Géricault to Matisse”, which focused on the African and Caribbean models depicted in French masterpieces. He began producing his own versions of 19th century paintings on bedsheets, replacing the heads of one or more characters with his own.

In his version of Manet’s “Olympia” he is the black maid who carries the bouquet; In contrast to her, he looks directly at the viewer. In his monumental interpretation of Géricault’s “The Raft of Medusa”, which was shown in January at the African art fair 1-54 in Paris, he appears as three of the castaways.

Mivekannin said he decided to anonymously represent his royal ancestor with a group of German tourists after his first visit to the Abomey Palace. “I knew I was connected to this place deep down,” he said. “I felt regenerated. It was like coming home. “

Why not show the king at the height of his powers? “When I left home and moved to Europe, I found that there was so much of my family history that I didn’t know,” he replied. “I realized that my great-great-grandfather suffered tremendously in exile. My work shows the hidden aspects of family life. “

The series about Behanzin, on which the artist is still working, will be shown this year at the Eric Dupont gallery in Paris. In an interview, Dupont said he was “totally blown away” when the artist stopped by a few years ago and distributed his leaf pictures on the gallery floor. Soon after, he stepped in to represent the artist in Europe.

“The story is always told by the same people,” said Dupont. “Roméo’s work raises real questions. It tries to put things in their place. “

Cécile Fakhoury, Mivekannin’s gallery owner in Abidjan, Ivory Coast, said that although the artist was descended from kings, he also felt a kinship with blacks who were descendants of slaves. “There’s an eternal struggle in him,” she said. “His work is all about this double identity.”

Mivekannin said the return of the ancestral treasures would be an important personal milestone. When the factories were looted more than a century ago, he said, “We were dispossessed and disabled. A piece of something was torn off. “

“Now it’s going to be reset,” he said. “The king is finally going home.”

C.D.C. Director Warns of a ‘Pandemic of the Unvaccinated’

Covid nonetheless weighing on jobs however confidence is coming again