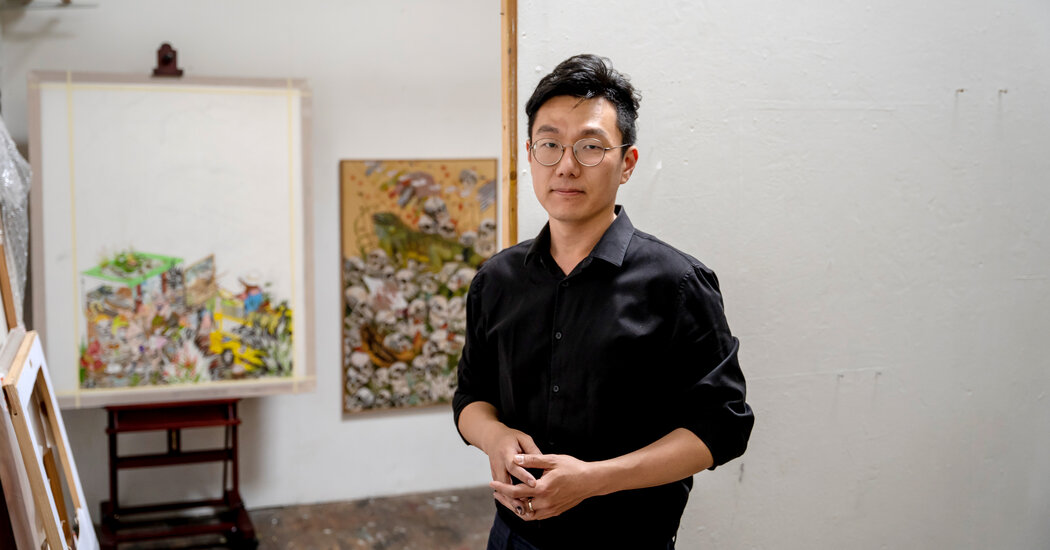 LONDON – On a gray spring afternoon, the artist Hun Kyu Kim welcomed a visitor to his small London studio, a curtain cabinet filled with pigments, brushes and tools. On an easel was a half-finished painting of a menagerie of cartoon creatures – a dog with a gun, a dragon biting a cell phone – all carefully drawn and painted over in an abundance of colors.

Visitors to Art Basel Hong Kong can see a selection of other works by the 34-year-old South Korean at the stand of the Paris-based High Art Gallery. His images are part of the fair’s Discoveries section, which is dedicated to emerging artists.

Unlike other young talents whose careers take a while, Mr. Kim was spotted early: he received a gallery display as soon as he received his MA from the Royal College of Art in London in 2017 and exhibited work at the Frieze Art Fair three months later .

Both amusing and annoying, Mr. Kim’s paintings are executed in a mixture of two contrasting aesthetic styles that he was immersed in from a young age: traditional Korean silk painting on the one hand and Japanese pop culture and animation on the other.

“My work is a combination of the fantasy world and the real world,” said Mr Kim in an interview in his studio in an artist common room in East London, in Bow. “Everything we see in my picture – the past, the present, the future, East, West – is very chaotic. I try to put everything in there, like Lego blocks, and say, ‘Let’s play. ‘“

Mr. Kim said he had wanted to be an artist since he was in kindergarten. His mother, a high school literature teacher and aspiring writer, nurtured her son’s artistic inclinations. She would come home from school carrying sheets of paper that were printed on one side and were about to be thrown away. Her son would use them in his drawings and watercolors.

As a young boy, Mr. Kim had an eye-opening moment when he was taken to a museum and first saw 14th century Buddhist scroll paintings made in Korea during the Goryeo Dynasty. He was fascinated. “I could see the very thin lines and the very delicate colors,” he said. “I could feel the time and work that went into it and it really got overwhelming. I thought to myself, ‘I want to do something like this.’ “

Another important turning point in his founding years was his youth, when South Korea, until then under strict rule and a conservative and closed society, suddenly decided to open up to the culture of its historical enemy: Japan.

“So many Japanese animated films and pop stars came to South Korea,” recalls Kim. “I belong to the generation that has been heavily influenced by Japanese culture.”

The great Japanese animated filmmaker Hayao Miyazaki was an important source of inspiration, especially his “Princess Mononoke”, an epic fantasy from 1997 in which gods and other types of heroes fight in a forest against humans who consume natural resources.

On his mother’s recommendation, Mr. Kim attended a secondary school specializing in the arts. There he learned traditional Korean drawing and silk painting as well as art restoration. He continued his education in oriental painting at the College of Fine Arts at Seoul National University, where he also studied art theory.

“The training was really rigorous,” he recalled, noting that it sometimes took more than a decade of instruction to become a restorer of traditional painting. “But I really did find some kind of beauty in oriental painting and enjoyed applying it to contemporary art.”

South Korea was a politically and socially oppressive environment at the time, Kim said. But he managed to save enough money to move to London in 2015, where he enrolled in the Royal College Masters program in painting. He was suddenly in a completely different atmosphere than in Korea. Britain was “a center of contemporary art,” he said – the place where those in the group who are known as young British artists, like Damien Hirst and Tracey Emin, still ruled the neighborhood and where people lived more freely. At the Royal College, for example, he observed how his fellow students abandoned centuries of art tradition and embarked on a dizzying mix of disciplines: painting, sculpture, performance, installation.

When the director of the Approach Gallery in London saw Mr. Kim’s work on his class final show, the gallery immediately signed him. Mr. Kim has had a number of solo exhibitions and now has a small but growing international collector base.

Mr. Kim described himself as a “workaholic” who spent ten hours a day in his studio seven days a week and only got three vacation days last year. He acknowledged that his work “makes people uncomfortable”; his own wife said she did not particularly want to hang one of his paintings in her house. Still, he maintains a connection with his training in Korean silk painting and overflows his work with supernatural and phantasmagoric figures.

His goal is to show his art in “super fancy galleries” in London and around the world. But the joy that Mr. Kim takes in his work exceeds this ambition. “I love my job and I love drawing and I love this kind of little life,” he said. “I just want to keep doing what I’m doing.”