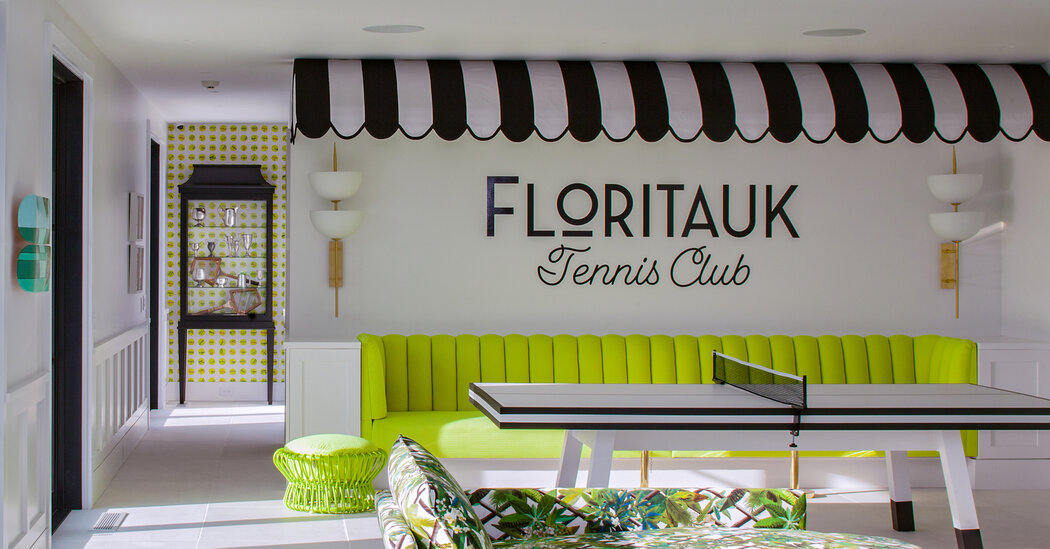 In another nod to the old-school country club culture, Ms. Viñas installed a mock trophy case in front of the locker room with the hand-painted tennis ball wallpaper by artist Jonas Wood as a whimsical background. The glass showcase is filled with vintage-engraved goblets and plates, most of which were purchased on eBay from Ms. West, who was only looking for runners-up. “There’s no winner in the bunch,” she said. “But there are some really great trophies for mixed pairs and trophies for third place.”

To complete the story of Floritauk, Mrs. Viñas’ husband, Jaime Viñas, a graphic designer, has created a collection of Floritauk branded hats, t-shirts, sweatbands and bags, as well as stationery, postcards, trays and cocktail napkins. There’s even a bar menu listing special house cocktails like the Floritaukito, Route 27 Sour, and the Esther named after Esther Williams, a heroine of Ms. West’s grandmother.

“When you go down to the tennis pavilion, you are simply delighted and transported to another world,” said Ms. Viñas. “It’s all very theatrical.”

And for this active family, the pavilion was a great blessing during last year’s Covid-restricted summer. “It was the first year we really took advantage of it, and we found three teenage boys to be more down there than up there,” Ms. West said.

What’s new this summer? Ms. West said a bocce drink menu was in the works, as well as – at the request of one of the boys – Floritauk bucket hats to give away what they hope to be more guests than a year ago.

As a repeat visitor to Floritauk, Ms. Viñas said: “The swag is amazing. That’s all part of the fun. “