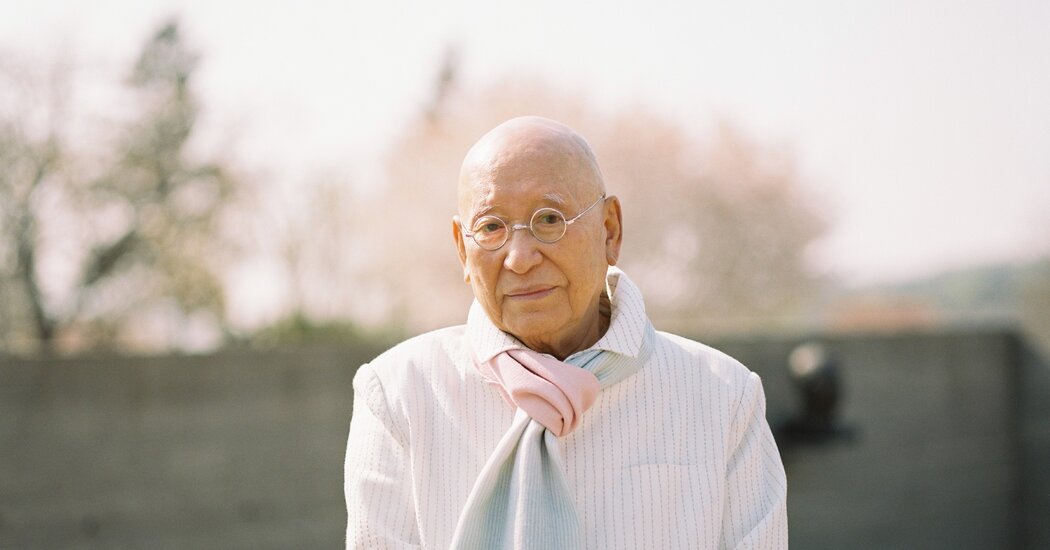 SEOUL – In 1951, as the Korean War dragged on, a young artist named Park Jae-Hong made his way to Seoul. The conflict had cut his first year at art school and he had been forced to serve first from the north, then from the south, stationed on the Masan coast. He had survived plane attacks, meager rations, the bitter cold – and had been released. Back in the capital, Park tried to raise tuition and asked soldiers from the United States if he could do their portraits. He exchanged their dollars for won – Korea’s currency – and bought art supplies and congee made from leftovers from military bases. “A cup of it and a glass of soju, and I would be very happy,” he recently recalled from a translator during an afternoon visit.

Park sat in the Gizi, a spacious living, working and gallery space in Seoul, where he has lived with his family since 2018, with a pink scarf wrapped around his neck. Some of his works – brightly colored abstractions that vibrate with thin lines – hung nearby. Today he is “a personality of tremendous influence, both as a teacher and as an artist,” said Alexandra Munroe, senior curator of the Guggenheim Museum for Asian Art. He will be 90 in November.

Although Park walks with an elegant wooden stick, he was full of energy as he sipped tea and uncorked stories of his remarkable career approaching new milestones. After a spring exhibition at the White Cube in London, he has more on deck, in the Kukje Gallery in Seoul, in the Tokyo Gallery + BTAP in Japan and in the Château La Coste in Provence. An English translation of a moving biography of his daughter has appeared and he is combing two museums of his art in South Korea.

This two-pronged strategy is the classic park that has never made a difficult hike easier. He was born in rural Yecheon during Japanese colonial rule in 1931, and his father wanted him to study law. When he was accepted into the Hongik University arts program (he had secretly applied), the older park “wouldn’t eat for two weeks because of its disappointment,” he said. “A painter was considered poor and very low in the hierarchy of social status.”

On the verge of graduating in 1955, Park fled Seoul to avoid military service and adopted the code name Seo-Bo. He kept it. And after he was successful in the official national exhibition, he protested with fellow artists against their conservatism. They issued a manifesto calling for an “uprising against the stubbornness of the ancient art scene” and organized an independent show.

Like many of his avant-garde colleagues, Park Seo-Bo channeled the horrors of war into searing, aggressive abstractions. When he was young he said, “I used to cry. I was even afraid of small insects. But the war made me really strong. It changed me completely. “

Those early years are the stuff of feature films. When Park married a younger art student, Yoon Myoung-Sook, in 1958, Kim Tschang-Yeul, a fellow artist who worked as a police officer, accompanied her on her honeymoon south and showed his ID at checkpoints to make sure the fugitive groom was there was not recorded. The couple lived frugally in Seoul, which was impoverished and straightened up again. A dictatorship was in power. Yoon managed her living conditions while Park tirelessly painted and brought teaching jobs together and eventually settled in Hongik.

While drifting artistically in the late 1960s, he landed on his defining style. He read Buddhist and Confucian texts and tried to find a way forward. One day he watched his second son, three-year-old Seung-Ho (now Seung), struggle to write a word on a grid. “He kept erasing it, and in the end he got so tired of making those doodles,” Park said, moving his hand vigorously to mimic the action. “There were so many eraser marks. I realized that it’s all about giving up, letting go. “

Park brought this revelation into his art. Sitting on a low platform with a canvas beneath him, he kept running a pencil through wet white paint. He gave up expressionist signs and pursued what he called “endless action and endless repetition”. These seductive paintings, which he called “Écriture” (“writing” in French), are case studies of how simple acts, sustained over time, can be enchanting. Shimmering fields in white, black and gray conjure up a moving artist’s hand. He said doing it was a way to “empty” your mind.

The Guggenheim has a captivating “Écriture” from 1973 (the year Park debuted the series in Tokyo), with narrow rows of graphite flowing over an area over 6 feet high and 9 feet wide. “It gets immersive and atmospheric,” Munroe said, describing the piece as “a lot about imperfections. It’s also about the breath. It is also about the mark of the body. “

The series made Park a leader in a loose Korean movement known as Dansaekhwa (“monochrome painting”), whose artists directed traditional materials towards inventive new ends, influenced by both indigenous practices and foreign avant-garde groups. Park eventually incorporated Korea’s sturdy hanji paper, made from the inner bark of mulberry trees, into his works, soaking it until it turned into a pulp, and working it on canvases before drying.

A Dansaekhwa show at the 2015 Venice Biennale raised the profile of their artists. By then, some had had success living in more resilient art scenes internationally, like Park’s friends Lee Ufan in Japan and France and Kim in France. But Park worked at home, taught, and helped develop arts festivals, becoming a star in the country’s art world. “Despite the fact that Korea has many flaws and many weaknesses, my roots are in Korea,” he said.

That meant Park’s “artistic reputation in global art was not really what it deserved,” said Kate Lim, a Korean writer and curator in Singapore who credits him with revolutionizing painting and “traditional paper as paint, even as Mastering Texture “. as a form. ”Since she was“ slightly outraged ”by his low profile abroad, she wrote an English-language biography in 2014.

A similar impulse motivated Park’s daughter Seungsook to write. She was impressed with the achievements of the generation that survived the Korean War and prospered the South, she said in an email. “I wanted to tell my parents that what they have done all their lives was enough and great, and that it will stay intact in the future.”

Her book, online for free, is an unwavering account of her father’s manic drive to be successful. In one illuminating episode from the 1980s, he asks a curator to reveal the size of the largest work an artist brings to a group show so that he can create an even bigger one. He was also a tough professor who pushed students in their work and – in a time of liberal alcoholism – their drinking. “Either you were blindly drunk, passed out and woke up on the sidewalk, or you dropped out of the Seo-Bo course,” she writes.

She describes marathon studio sessions (he now works eight hours a day) and a “long, adverse, unhealthy marriage,” with his early control behavior causing Yoon to contemplate a divorce. Seungsook, a former art therapist who now works in the film, said she “hated him all my life”. They didn’t understand each other and she thought he was “a kind of person who wants to control everything because he thinks he is the best and doesn’t trust anyone”. But in 2018 he was sick and when she visited she was shocked at how weak he looked. They started talking.

The seat of the fire has cooled down over the years. “I maintain this inner peace,” said Park when asked about the secret of his present power. “Before, I would get annoyed by a little something. I would be outraged. You could say I’ve finally matured. ”Park has recovered from two heart attacks and one stroke. He said to his daughter, “A man’s life depends on the mercy of his wife.” (Yoon just happened to have published a book of personal essays; her husband wrote the foreword.) The couple’s trip to Fukushima, Japan, in 2000 to see the autumn leaves changed his art dramatically.

“Since then it’s about nature, about healing,” said Park. Lush color entered to comfort the onlookers. He picked up his cane and strolled through his gallery, pointing to a bold red piece that was inspired by these foliage and a yellow one that drew on Jeju Island on a clear day. Narrow hanji columns with rough tips line the canvases – ornaments made from a humble, ancient material that is carefully positioned by rulers and other flat tools.

Park’s long-time compatriot Kim, who painted shimmering drops of water, died in January at the age of 91. Kim had started a museum dedicated to his work, and Park is following suit. The first of his two museums, which focuses on his Dansaekhwa work, is slated to open in August 2022 in the Jongno district of Seoul. Land was donated by the local government, and the approximately 22,000-square-foot building was designed by Yang Kiran. is funded by the Park Seo-Bo Art and Cultural Foundation. (His first son, Park Seung-Jo, is the chairman.)

The more ambitious endeavor is in Yecheon, the birthplace of Park. For a museum that appraises his life’s work (he will donate around 120 pieces), Park advertises the Swiss architect Peter Zumthor. His work is “almost like walking into a cathedral in the morning,” he said. (His favorite Zumthor building is the Kolumba, a serene art museum in Cologne, Germany, made of gray brick and wood.) The architect has not yet signed and details of the project supported by local officials are yet to be determined, but Park has a story in which he gets what he wants.

When Park was bidding on porcelain moon glasses from the Joseon Dynasty (1392-1910), Park said he often competed fiercely. At least half a dozen of the gleaming white urns were scattered around the room. “I love her almost like a crazy person,” he said. Most were almost spherical in shape, with subtle, intriguing variations. But you had a thick, elongated wave around your whole body. It was “the strange thing in the stomach” of the stove, he said, explaining that it was maybe 300 years old. Ordinarily the artisans would have thrown such a piece away. “But this one, although unsteady, had a balance,” he said. “Because it can stand on its own, they didn’t break it.”