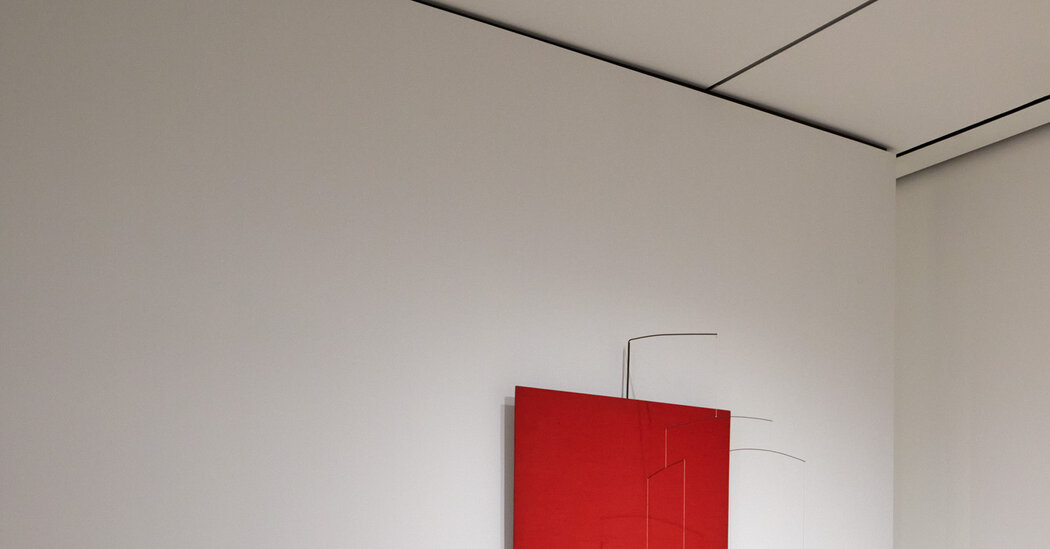 In terms of the Museum of Modern Art, the sculptor Alexander Calder was something like his American Picasso. Both were precocious children of academically trained artists. Both were shaped by their own life-changing encounter with the Parisian avant-garde three decades apart. Modernism exhibited both early and often and acquired their works in abundance – although of course no other artist at MoMA comes close to Picasso’s figures. Much of the success of any artist has been tied to that of the museum. To some extent, both were part of the MoMA brand, albeit in very different ways. For one, Calder has been MIA for a while.

The standout exhibition “Alexander Calder: Modern from the Beginning” is his first major solo at MoMA since 1969. It is an in-house job, mostly dealing with the museum’s Calder holdings and archives to tell the story of his relationship with this early one Telling favorites. Several undisclosed Calder Foundation loans add to the narrative.

It contains the artist’s early toylike sculptures of farm animals and his brilliant wire portraits and trinkets; his famous hanging, gently drifting cell phones; its wall-mounted constellations and earthbound stabilizers; and a pinch of extraordinary works on paper.

The show’s subtitle evokes Calder’s sudden conversion to the new when he suddenly learned what modernism and abstraction was all about while visiting the Parisian studio of painter Piet Mondrian in 1930, at the age of 32. It also signals his rapid ascent into the largely European pantheon of MoMA artists, in which he occupied a niche up to Jackson Pollock that could not be compared with any other American woman.

The revelation and the ascension were related. Part of Calder’s stature at MoMA has to do with having a European pedigree, which is unusual for American artists of the time because his artistic life really began in Paris and because his rustic American sensibility has skillfully filtered European strains of modernity .

After studying engineering in 1919, Calder became involved as an artist and enrolled in the Art Students League in New York. He made paintings and also made animals out of wood and then out of wood and wire.

By 1926 Calder was in Paris, where he spent most of the years and where a friend told him to lose the wood and keep the wire. He bundled his toy instincts in a miniature circus of around 100 pieces – ingenious, almost deadly cute – and began to perform the “Cirque Calder” in Parisian art circles, which immediately inspired fans of Fernand Léger, Marcel Duchamp, Jean Arp and Mondrian.

Calder’s MoMA debut came in December 1930 when four of his chunky wooden sculptures were featured in Painting and Sculpture by Living Americans, a group show that opened barely a year after the museum was inaugurated. At this point, Calder was artistically elsewhere, fueled by Mondrian’s example. In fact, he evolved into an omnibus modernist whose work could be found in several places on the museum’s map of advanced styles and media. In the spring of 1936 it was featured in the section “Cubism and Abstract Art” and at the end of the year in “Fantastic Art, Dada and Surrealism”, to name just two of the museum’s pioneering exhibitions. It must also have been a hedge against growing complaints about MoMA’s European bias.

“Modern From the Start” was organized by Cara Manes, an associate curator for painting and sculpture, and opened with a gallery of large black sheet metal works – three sculptures, two maquettes from the 1930s to 1950s – and then becomes chronological.

The austerity measures of the first gallery are amazing. It may have something to do with the pandemic, but its main reminder is that while visual humor is seldom absent, there is a dignified, somber side to Calder’s work. The next gallery is small, and is dominated by his notable wire work from the late 1920s – including portraits (a full-length depiction of the French-American entertainer Josephine Baker) and several farm animals, including an elegant sow and a cow made from silver steel wire three tiny cow cakes made of wrapped brass.

The contrast between the first two galleries – the large black sculptures and the delicate pieces of wire – forms a Calder primer. Consisting of multiple levels of cut sheet metal, the sculptures emphasize his control over nuanced shapes, both rounded and straight, as well as his ability to angled them in such a way that your interpretations of animal, human, and abstract shift restlessly as you move around them move. The bent pieces of wire speak for its extreme sensitivity to lines, including the linear shadows cast by the wire portraits that provide alternative, more capricious expressions.

As the show advances to the next gallery, look down and right to see the 1930s “Shark Sucker,” a small neat log that Calder turned into a fish with a few well-placed bites of an ax and a drilled eye . Let’s call it a customized finished one.

The remainder of the exhibit is a large, loosely divided space that haunted Calder after 1930, examining the various ways he made modernism his own. The first pieces are wire, wood, painted balls and motors (unfortunately no longer functional). Early examples of kinetic art express the previously unknown playfulness of Russian constructivism. They are among the most lovable abstractions in modern art history, also because they are too casually handcrafted to be purely abstract. They are bursting with personality, a state that is much of Calder’s art. This section begins with “A Universe” (1934), a series of several wire circles, two spheres and two S-like wobbling movements, one in thick black tube, one in wire. As the title suggests, the ensemble forms a small, self-contained universe. It was the museum’s first calder to be purchased the year it was made.

In the 1930s, Calder regained some of the animal energy of his early pieces for more elegant semi-abstract works such as the indescribable “Spider” (1939), the repetitive appendices of which have a corps-de-ballet regularity that is also cinematic. “Swizzle Sticks” (1936) rejects the Constructivist with four wooden sticks weighted down with small lead balls and dangling in front of a bright red board and dancing in the air. The great “Gibraltar” (1936) is a surrealistic object par excellence, a small summit made of roughly hewn Lignum Vitae, which is cut through by a plane of polished walnut wood that carries two spheres and a crescent moon, two above and one below.

The flanking “Gibraltar” are two extraordinary, if less polite pieces by the Calder Foundation. From “White Panel” (1936) it emerges that a large black C curves outward around two sturdy lacquered metal intersections and appears like an unusual scientific model. “Apple Monster” (1938), which combines raw and carved wood, painted white, black, red and green, looks like it was made by the great outsider Bessie Harvey.

While Picasso became a god in the modern age, Calder was more of a household god. He didn’t think twice about building a beautiful mobile phone for the Bauhaus staircase of the new 1939 museum building in an international style, and neither did he even have an amazingly clever candelabra for the party that was celebrating its first decade. (It’s on this show.)

However, the museum’s focus on Calder has not been constant. In 1943, he wrote to a curator that he needed his financial and moral support, which appears to have prompted the museum’s large Calder survey later that year. (Significantly, modernism bought its first Pollock in 1943, “The She-Wolf”, which was produced that year.) The artist thanked him with a gift of numerous important pieces, including – in this show – “Shark Sucker”, “Gibraltar” , “Spider” and “Sandy’s Butterfly”, a robust, light-colored perennial in the sculpture garden. The museum’s last major allusion to Calder was a greeting to around 100 works in 1969.

And so here we are. Half a century later, modernity has greeted Calder with a beauty of a show that will make the world a better place for the next few months.

Alexander Calder: Modern from the start