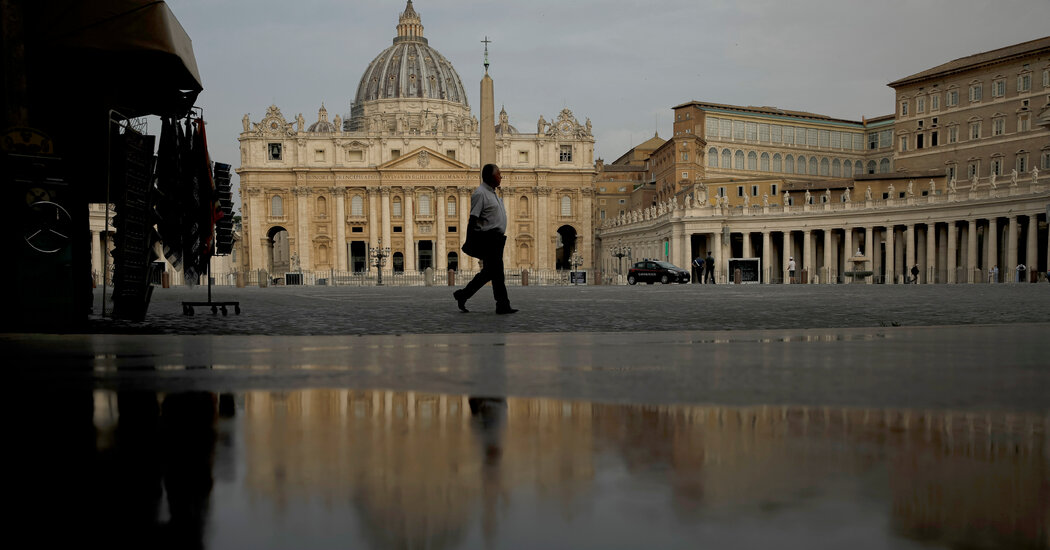 ROME – The most enduring images of this city after the disaster were printed a little over 250 years ago by the artist Giovanni Battista Piranesi. His etchings “Ruins of Rome” show landmarks like the Pantheon and Castel Sant’Angelo, but his most famous pictures show gardens strewn with rubble and crumbling bridges and gentlemen in three-cornered hats wandering through collapsed temples and overgrown ossuaries. For 18th-century philosophers and nobles on the Grand Tour, the dramas of “Ruins of Rome” made the transience of civilization clear – but they were more than a high-end tourist guide. The good days are over, but are coming anyway; Rome is cooler without people.

I recently had my own Piranesian views of the empty Eternal City: mostly on Instagram, as Rome and other European capitals have reopened their museums and heritage sites (and in some cases their performance venues) to limited crowds. The locals have come back in bursts. Tourists return in trickle. But usually the overcrowded cultural institutions are nowhere near as high as the number of visitors – and like Piranesi’s isolated Grand Tourists in the empty forum, I thought I’d better see the rubble for myself.

At Palazzo Barberini, home to Italy’s national collection of old masters, I was the only visitor to the newly opened galleries, which hosted a large exhibition of baroque painting and watchmaking. In well over half of the rooms of the Capitoline Museum, on the hillside plaza designed by Michelangelo, it was just me and the marble busts. Raphael’s chapel in Santa Maria del Popolo, Caravaggio’s spotlight “Call of Saint Matthew” in San Luigi dei Francesi, the late medieval mosaics of Santa Maria in Trastevere: all by me.

Without most of the visitors, Rome is the greatest cultural incentive package in the world. But these museums and art institutions lost three quarters of their audience in the pandemic year. Even as vaccinations and travel restrictions abate, Roman and other European museums – some of which were almost cut off from local audiences with the height of mass tourism in the late 2010s – face financial constraints, canceled programs, and even potential closings.

Question 1: How do you come back? Question 2: If you need a global health crisis to properly appreciate it, should they return the same way?

Italy was the first European country to be locked down and imposed strict travel restrictions to help curb the spread of the coronavirus. Its 464 state museums, monuments and archaeological sites were not spared; According to the Italian Ministry of Culture, the number of visitors fell by 76 percent between 2019 and 2020. The previously oversaturated Vatican Museums – technically not in Italy and the fourth most visited museum in the world – saw visitor numbers fall 81 percent from 6.8 million in 2019 to 1.3 million in 2020 (and one million of those came in the two months before the first lock). Last year’s Blowout Raphael exhibition here in Rome was seen by only 120,000 visitors; The Leonardo exhibition at the Louvre in Paris was seen ten times as often before the pandemic.

The Italian government approved the reopening of museums in “yellow zones” – including Rome, as well as Milan, Turin, Venice, Florence and Naples – on April 26th. At first the doors were only open a few days a week, and booking was compulsory; now most of Italy is in a “white zone” and museums can start their full summer operations. Nevertheless, on a Saturday I counted four more visitors to the most anticipated exhibition of the year in Rome: “The Torlonia Marbles: Collecting Masterpieces” in the Capitol, which shows a collection of Greek and Roman sculptures that had not been seen for decades. It felt more like a private viewing and also a kind of democratic disaster: So long in the shade, and then nobody catches you in the light!

Official dates on the Italian museum visit for April, May and June will not be available until the next quarter. But the Vatican Museums, which had an average of 22,000 visitors a day before the pandemic, only come to 3,000 on weekdays and 5,000 on weekends, according to a Vatican spokesman. On a Monday morning, instead of the usual hustle and bustle at the entrance, there were only a few selfie stick sellers. In the Sistine Chapel, where I was pushed and elbowed by the crowd in the past, around 30 spectators marveled at Perugino’s frescoes and stretched to see Michelangelo’s stocky muscled men on the ceiling. No photos!

Msgr. Paolo Nicolini, deputy director of the museums, described to me “an increase in visits by young people and interactions with the Vatican Museums like never before,” adding that, for the first time in recent years, Italians are making up the majority of visitors. These bucket list entries have turned into paintings again, and the Romans I caught up, to put it diplomatically, weren’t particularly disturbed by the lack of visitors.

The Italian government has launched a € 6.7 billion – about $ 8 billion – cultural stimulus, much of which is aimed at improving museums’ notoriously poor digital offering. But the country’s museums sway wildly between official neglect and tourist oversaturation, and need new, more solid foundations to nurture science, keep audiences, make money, and guide visitors past the biggest attractions in the biggest cities.

“There are ways to engage audiences where tourists and the local public come together,” said Annalisa Cicerchia, professor at the University of Rome Tor Vergata and co-author of a new report on Italian museums after the pandemic. With tour groups gone, Italian museums must use this time to step up public outreach and educational efforts – pointing to the recent successes of Rome’s museums with programs for migrants and the elderly.

Most of all, the pandemic requires museums to have a real reason for being, a mission that the ever-increasing tourist numbers allowed them to remain blurry. “Basically the question is the same: what is so unique about a museum?” Cicherchia said. “Relevant for your experience and for your life? Or for memories that you will cherish in the future? “

In some Roman institutions, such as the National Museum of 21st Century Art, better known as MAXXI, there was evidence of an answer to this question. In his house, designed by Zaha Hadid, there is a huge exhibition of artists from the former Yugoslavia as well as a collective exhibition with current programs on technology and migration, which show how a Roman museum puts local and regional concerns in the foreground while still attracting an audience. (Cicherchia cited the new MAXXI outpost in L’Aquila as a particular public relations success, which is attended by thousands of local visitors and local students have been trained to be guides.)

Or, for a darker look into the future, Damien Hirst, who has taken up almost every room in the Borghese Gallery with an exhibition of counterfeit antiques from a fictional shipwreck. Bernini’s “Daphne and Apollo”, one of the most finely carved marble sculptures ever created, has to share its gallery with three sculptures of chained enslaved couples, the surfaces of which are reminiscent of styrofoam packaging. Discover paintings as boring as a vegan carbonara hanging between the Raphaels and Renis, and fake barnacle-covered gods and heroes rule over real ancient statues. It’s one of the most perverted and outrageous exhibitions I’ve ever seen; it feels like public masochism – and I think I might have liked it.

When I saw these fake antiques four years ago, I had the same reaction as almost everyone else: horrible. That view has not changed – but in empty Rome, still battered by a year of cultural deprivation, I felt strangely touched by this catastrophic betrayal and the hopelessness of Hirst’s Roman holiday.

After all, the Renaissance was also a time for the imitation of antiquities, when the rich, amid plagues and upheavals, built pleasure palaces that simulated Rome’s heyday. We don’t even get the sheen of scholarship that the Borghese princes put on it; just that Piranesian feeling that the good times are over and you are here to walk the ruins.