Home Home Alongside the Columbia River, Making a Monument of the Land 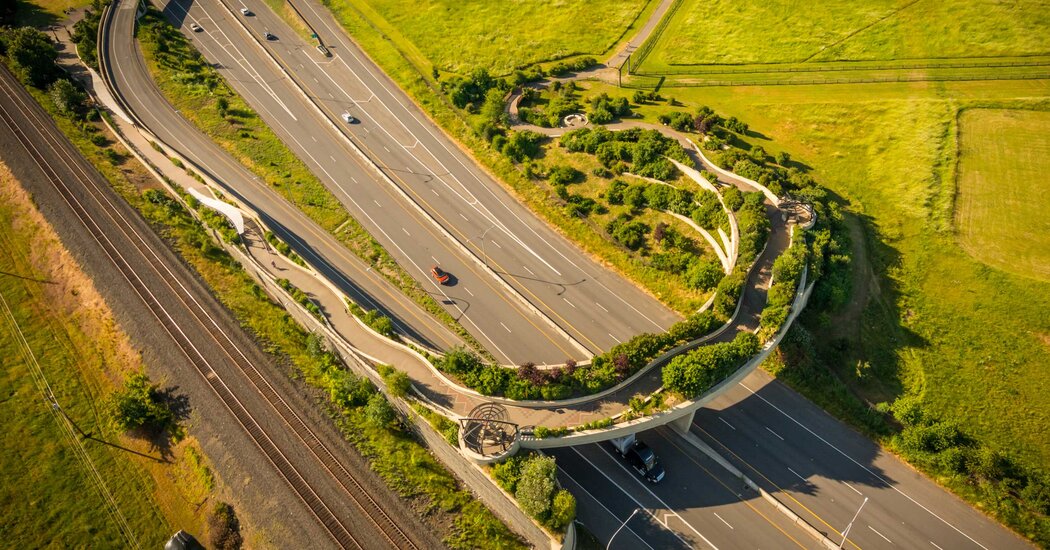 On a spring morning, the Vancouver Land Bridge appears to be a living bridge, lush with native plants fluttering in the wind as joggers follow its undulating path. Its long arch – about half a mile – snakes over Highway 14 and reconnects the Columbia River to the ancient Klickitat Trail, which is said to have been used by northwestern tribes for millennia.

Ten miles north of downtown Portland, Oregon, the earth-covered footbridge, completed in 2008, was a collaboration between architect Johnpaul Jones, best known for his work at the National Museum of the American Indian in Washington, and artist and architect Maya Lin, who designed the Vietnam Veterans Memorial.

Mr. Jones and his architectural firm created the maquette of the land bridge that is the centerpiece of “Along the Columbia River: Maya Lin and the Confluence Project,” which will be on view in the Maxey Museum at Whitman College in Walla Walla through December 15 , Wash. And online.

Along the Columbia River is the first retrospective to use architectural models, blueprints, correspondence, interviews, geological surveys, and other archival materials to outline the scope and impact of the Confluence Project, a Washington-Oregon nonprofit that educates the public would like to highlight the importance of the river system through the voices of the northwestern tribes and to counter the myth that Lewis and Clark “discovered” this land.

At the land bridge, “We packed the prairie and pulled it over the freeway,” said Mr. Jones.

It is one of six public “art landscapes” that the Confluence Project commissioned Ms. Lin to design along 438 miles of the Columbia River system, from the basalt fish cleaning table to the Chinook creation story in Cape Disappointment State Park on the Washington coast The story is engraved in Sacagawea Historical State Park and in the Listening Circle Amphitheater in Chief Timothy Park on an island in the Snake River near Clarkston, Wash.

Each location was chosen by tribes of the Columbia River to mark a significant confluence or point where bodies of water or cultures converge. Five of the six are complete.

Mr. Minthorn said the project is working to bring a small group of people – Indians – together with their fellow citizens to learn how to “become American” and how best to run the country together. The goal, he said, is to create visual markings, not monuments per se that are in harmony with the landscape, reminding that “just because you don’t see us doesn’t mean we’re not here”.

For two decades, the nonprofit, founded by Mr. Minthorn and tribal leaders, community art advocates, and historians, has sought to reclaim the narrative of discovery and manifest fate.

The exhibition also shows how these projects provide alternative ways to honor stories and living cultures at a time marked by the fall of statues and the rejection of famous people frozen in time and stone.

“We’re responding to the growing hunger to know more about what it means to be here and to relate better to our environment,” said Colin Fogarty, executive director of the Confluence project.

In April, Whitman and Confluence hosted the “An Evolutionary Moment for Monuments” panel discussion for the exhibit.

“We are not monument builders,” said Bobbie Conner, director of the Tamastslikt Cultural Institute, Confluence educator and member of the tribes of the Umatilla reservation. “We don’t build buildings, sculptures or obelisks to take the past into account. We trace the past in our oral traditions, in our hearts and in our thoughts. “

The event was hosted by Matthew Reynolds, an art professor at Whitman who is writing a book on the Confluence Project. He said that when he took his students or his (“mostly white”) friends to Confluence locations, they were often confused by their simplicity.

“You are waiting for this great work of art that rises from the earth or draws attention to itself and screams, ‘I am a great work of art. Just look at me and don’t look at anything else around me, ”he said. “What I find most poignant about the Confluence project is that it defies that kind of look. It prompts viewers to work harder and it draws attention to the landscape around them and it prompts you to move around and experience these places as whole environments. “

The Confluence Project and Ms. Lin do not ignore the roles of Lewis and Clark and other non-Native Americans. Rather, they use the extensive documentation of the discoverers as supplementary material that is subordinate to the primary source of native voices and oral traditions.

The explorers, said Mr. Fogarty, “did not discover this place, but they made really good notes.”

For example, the Land Bridge has panels listing native plants and how they were used by local tribes, as well as panels about Lewis and Clark’s campsite and the establishment of the Hudson’s Bay Company’s first European trading post, now Fort Vancouver.

On the Sandy River Delta, 20 miles east of Portland, Ms. Lin’s elliptical wooden bird blind structure is made of lamellas engraved with the common and scientific names of the 134 species Lewis and Clark noted on their voyage.

“My goal was sometimes to go away, not to add a work of art, but my art was to clean up previous damage and reconnect to the environment to allow the visitor a visceral and intimate connection back to the land itself,” said Dr. Lin wrote about the project. (Another environmental-themed installation by Ms. Lin opened this month in New York City. Ghost Forest in Madison Square Park through November shows the effects of climate change on what was once a vibrant wooded area.)

“Along the Columbia River” also includes tribal correspondence and Ms. Lin’s plans for a project in Celilo Falls near The Dalles, Ore., Where disagreement has halted work.

The tribes of the Columbia River consider the Celilo Falls, which were once rich in salmon, as sacred, a site with a rich tribal history of fishing, culture, and trade that some say dates back at least 16,000 years.

In 1957, the US Army Engineer Corps completed the Dalles Dam, which flooded the falls and changed salmon migration and spawning. The work destroyed “entire indigenous villages and contracted fishing grounds, and with it the economic, cultural, and spiritual livelihoods of thousands of Indians,” according to the National Museum of the American Indian.

Ms. Lin’s designs for the site include the Celilo Arch, a 500-foot walkway over the water that pays homage to the local fishing platforms that were once formed from rushing waters. The project is supported by the Confederate Tribes of Warm Springs, the Confederate Tribes of the Umatilla Indian Reservation, and the Nez Perce Tribe. In 2018, the Yakama Nation withdrew support, fearing the area would continue to be damaged.

The US Army Corps of Engineers confirmed that the project will be suspended until all affected tribes agree.

Meanwhile, Confluence is focused on what’s called the Seventh Location, an educational program that connects tribal artists and cultural bearers with students at schools in Washington and Oregon.

“There is no process for doing what we have to do,” said Ms. Conner, the Confluence educator. “We expect to be here forever.”

Fb says it needs a ‘honest shot’ within the crypto funds sphere.