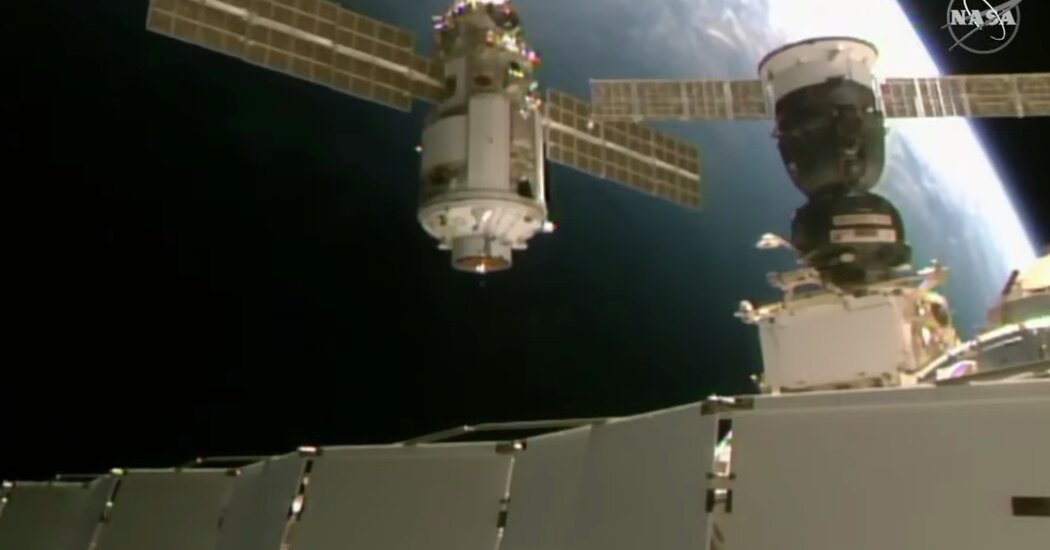 Hours after a new Russian module docked with the International Space Station ISS on Thursday, it unexpectedly re-ignited its engines and caused the space station to spin unexpectedly.

It took 45 minutes for the heads of mission to regain control of the situation. NASA officials said there was no threat to the seven astronauts on the space station.

“Today was another day where we learn the importance of having an operational team that is prepared for any eventuality,” said Kathy Lueders, NASA assistant administrator, during a press conference on Thursday afternoon.

The 23-ton module called Nauka adds a laboratory, additional sleeping quarters and other capabilities to the Russian segment of the space station. After its launch last week, it encountered a number of propulsion problems that Russian controllers were able to resolve prior to its rendezvous with the space station.

On Thursday morning at 9:29 a.m. Eastern Time, the module gently docked with the outpost in orbit. Cheers could be heard over the audio feed when the operation was complete. Even this success was associated with some dramatics, as the automatic docking system did not work quite as expected and Oleg Novitsky, a Russian astronaut on board the station, had to take manual control of Nauka to guide her the last few meters to her docking port.

Had it continued to spin at half a degree per second, the space station would have turned completely in about 12 minutes.

Controllers fired other engines – first on Zvezda, another Russian module, then on a docked Progress Russian cargo vehicle – to get the space station back into position at 1.30 p.m.

The torque from Naucasus engines would have stressed some structures and the change in direction would have resulted in the solar panels and antennas not pointing in the right direction. “You risk some things getting too hot or too cold,” said Joel Montalbano, NASA’s program manager for the space station.

Communication with the crew was interrupted twice – once for four minutes, then for seven minutes.

Roscosmos, the Russian space agency, will lead the investigation into what went wrong with Nauka, while NASA engineers assess whether stress and strain caused damage. “At the moment we have not noticed any damage to the ISS,” said Montalbano.

The problem with Nauka caused NASA to postpone the launch of Boeing’s Starliner spacecraft, which was scheduled to take off from Cape Canaveral Space Force Station on Friday and dock with the space station on Saturday. The start is now planned for Tuesday.

“We wanted to make sure that we had some air to breathe so that we could fully assess the situation on the station before we add another vehicle to the ISS configuration,” said Ms. Lüders.

Like SpaceX’s Crew Dragon capsule, Starliner is designed to bring NASA astronauts to and from the space station. There will be no people on board this flight, it is a replica of an unmanned flight to demonstrate that all systems are working properly. The first demonstration flight in December 2019 went wrong due to software errors and never docked with the space station.

Earlier this year, Russian space officials spoke of withdrawing from the International Space Station if the current deal with America and other partners expires in 2025, reflecting poor relations with the United States.

But that didn’t stop them from sending up the Nauka module, the design and development of which began more than 20 years ago – long before current political tensions flared up. The introduction was repeatedly delayed by manufacturing errors and underfunding.

The module is considered important for the entire Russian space program. Russia is currently the only major operator without its own laboratory module, and Nauka means science in Russian. That fits in with his main task: to accommodate laboratory equipment for experiments.

But the 42-foot long cylinder also provides additional living room, including a bed for an astronaut. It also adds water purification equipment and can get power from its solar wings. The Russian part of the station had taken power from the American side.

It will also host a new robotic arm from the European Space Agency.

Nauka is one of the largest modules on the station today. A series of spacewalks will be required to hook them up to the station’s power and command circuits.

A breakdown in the spacecraft’s engines has made scientists on Earth nervous for days, according to the European Space Agency. “Adversity insisted on being part of the trip,” the agency said in a statement.

While Nauka finally attached to the station, it flew in orbit as an autonomous spaceship for several days. The module exposed its solar panels and antennas, but then failed to fire engines to raise its orbit, a possible end-of-mission problem. Russian engineers managed to correct this, the European Space Agency said, characterizing the episode as a couple of “hectic days of mission control.”

Roscosmos never addressed the problems directly in its updates on the mission and only found out in a press release last Thursday that the module’s engines were actually in operation.

The docking process itself was risky. After all, Russia sent a 23-ton object on a collision course with the $ 100 billion space station.

What Russia was trying to avoid happened in 1997 when a Progress cargo rocket crashed into its former Mir space station, breaking one of the modules and destroying a solar panel.

Since the 1997 accident, docking procedures have become much more sophisticated. At the time, the Progress was manually remote-controlled by a Russian astronaut on the Mir. The docking of the new Nauka module was completely autonomous.

And mission managers have had a lot of practice over the 20 years they have run the International Space Station. It was launched in parts that had to be docked in orbit. Still, engineers are really paranoid when it comes to avoiding even the unlikely disaster.

When SpaceX was preparing its first mission of its astronaut capsule to the space station – without a crew on board – Roscosmos expressed concerns that the capsule would fall into the space station if the Crew Dragon’s computer failed during the approach. (SpaceX’s cargo pods were approaching from a different direction so there was no risk of collision.)

NASA agreed to take some precautionary measures – closing the hatches on the ISS and preparing the Russian Soyuz spacecraft, which will take astronauts to and from the outpost for a quick evacuation if necessary. Crew Dragon docking went smoothly, and prior to the second Crew Dragon mission that brought NASA astronauts Robert Behnken and Douglas Hurley to the space station last year, SpaceX made other changes that even removed the unlikely chances of something going wrong .

Earlier this year, Russian officials announced that they were considering ending their participation in the International Space Station in 2025 if operations are currently suspended.

But American officials are trying to extend the life of the station through 2028 or maybe 2030. So far, they don’t seem concerned about the Russian statements. Russian news agency TASS reported that Dmitry Rogozin, the head of the Russian space agency, said the exit would be gradual.

Spatial decisions are rarely made suddenly.

Just three years ago, the US and NASA said they wanted to leave the ISS by the end of 2024. Space station advocates in Congress, such as Texas Senator Ted Cruz, refused, and space agency officials later made it clear that this was not a tough deadline and that they would not leave until the commercial broadcasters were operational.

A year later, the Trump administration shifted its space focus to sending astronauts back to the moon, and talks about withdrawing or retiring the ISS ended.

Russian officials said they would work towards building a new Russian space station but did not say how the country’s chronically underfunded space program could sustain one. With the commissioning of SpaceX’s Crew Dragon, the Russian space program lost one of its main sources of income: NASA bought seats on the Soyuz rockets.

NASA is negotiating an agreement with Russia under which NASA astronauts would continue to ride the Soyuz spacecraft in exchange for Russian astronauts flying into space in SpaceX and Boeing capsules. No money would be exchanged, but it would help the astronauts familiarize themselves with all of the equipment.

The announcement also came as tensions between the United States and Russia grew. In April, President Biden officially blamed Moscow for hacking operations and imposed sanctions on Russian companies. Russia has also reached an agreement with China to work towards a lunar base in the next decade.

Yet cooperation between the two countries in space dates back decades before the Soviet Union fell apart. Even in 1975, during the Cold War, NASA and Soviet spacecraft docked in orbit, and the astronauts greeted each other. American space shuttles later flew to the Russian Mir space station, and several NASA astronauts lived on board the Mir.

China’s Bold Plans in House: The Moon, Mars and Past

Why economists and activists are disenchanted over pledges