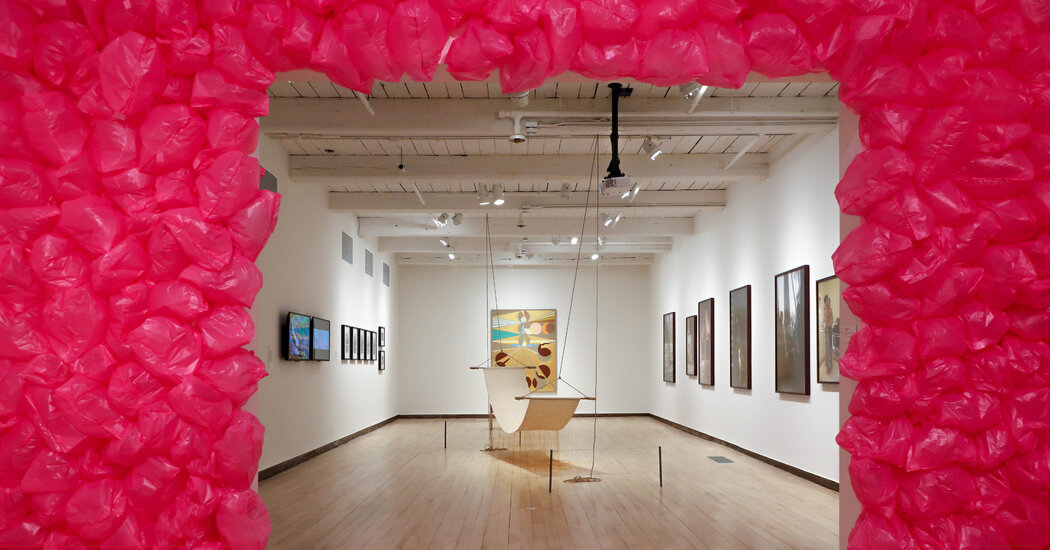 Two shows that recently opened at the Massachusetts Museum of Contemporary Art are part of our new normal: One was created during the most restrictive moments of the pandemic; The other, though long-planned, shifted focus as those past momentous months unfolded. Conceptually, both deal with the personal and political issues that are currently cropping up in many minds.

This exhibition is a balm after a year of learning how to maintain connections with loved ones in new, unfamiliar ways. In the early months of the pandemic, Nolan Jimbo, a graduate student in art history at nearby Williams College, selected six color artists, many of whom are weird, whose work can affect kinship and family ties, and the way those ties appear over time and spatial distances are created and maintained. They are Laura Aguilar, Chloë Bass, Maren Hassinger, Eamon Erz-Giron, Clifford Prince King and Kang Seung Lee.

Hassinger’s “Liebe” (2008/2019) is a welcome entry point into this small but tightly packed show. Pink plastic bags attached to the wall are filled with love letters and “inflated with human breath”. They serve as an expression of the care that can be experienced when contact is impossible.

A contrast can be found in the photographs of King (whose work also appeared in the New York Times). This series, known as Affirmations, is about the intricacies of human contact. Two men are dancing in a kitchen; two figures kiss under a sheet while a light illuminates their makeshift tent from the inside; three men plaiting each other’s hair and smoking weed on a bed; others hug the palm trunks. These members of the king’s inner circle seem to speak a secret language of touch that the viewer is not entirely familiar with.

In other works the concept of connection is more abstract. Laura Aguilar, the Chicana artist who died in 2018, photographed her strange, fat body in a landscape because she felt accepted by nature in ways that other people did not. Gelatin silver prints from her 1999 series “Stillness” are haunting and intimate.

The video, prints, and poster that make up Bass’ #sky #nofilter (2016-17) poetically suggest that our shared experiences – among our families, our friends, our political comrades – may not be so are communal as we imagine it to be. Using a series of images of the sky taken with an iPhone camera, Bass suggests that even the most basic statements (“the sky is blue”) need to be explored in light of our deeply individual reactions to the world.

Lee creates imaginary genealogy of weirdness. In his video “Garden” (2018), for example, he imagines a relationship between the Korean writer Joon-soo Oh and the English filmmaker Derek Jarman – two people who did not know each other, but whose work is important to Lee himself. Lee digs holes in Namsan Park, a gay cruise spot in Seoul that Oh frequented, and in Jarman’s Garden in Kent. He drops half a drawing into each hole and connects the two on an underground level.

‘Glenn Kaino: In the Light of a Shadow’

Glenn Kaino, a Japanese-American artist from Los Angeles, began planning his installation for MoCA Gallery 5, the size of a soccer field, five years ago. He intended to link two different “bloody Sundays” – the civil rights march in Selma, Ala., On March 7, 1965, and the protest in Derry, Northern Ireland, on January 30, 1972.

Over time, the pandemic limited the planning and execution of the play, and protests following the murder of George Floyd last spring added new context to the work.

The centerpiece of the show requires a slow, choreographed procession on an elevated boardwalk in the darkened gallery, where music and lights make viewers move or stand still. Sticks and stones – the meager weapons of the Irish resistance fighters – and found postcards hang from the ceiling or are lifted from the floor with thin poles. Theater lights cast their shadows on the wall and turn the objects alternately into birds, drones, sailing ships and meteorites.

A wooden boat rises above the sidewalk – a reference to the 1979 IRA murder of Lord Mountbatten. It is twisted and resembles a snake eating its own tail. Projected silhouettes that flash and ripple across the walls are reminiscent of the murder of innocents by their oppressors. Puppet-like protesters wear signs – “bourgeois”, “rights”, “association”, “blacks”, “now”, “climate change” – as if the language of the revolution had been broken down into its most basic components.

At the end of the spectacle is a mirror in the shape of the wall in Derry where the British Army massacred Irish protesters. When the lights come on, a crowd of onlookers sees a wavy, distorted reflection of themselves – turning this random grouping into a potential for future resistance and protest.

In a separate room, a 2020 video revolves around Kaino’s long-time employee Deon Jones, who was shot in the face with a rubber bullet by a police officer at a peaceful protest rally in Los Angeles. Embedded in photos of Jones in an emergency room and archival footage of the events of Selma and Derry, Jones sings “Sunday Bloody Sunday”. In the video he is in “Revolution” (2020), a round, cage-like sculpture that fills the room.

The astronomical images, the circular boat, the loop of demonstrators from different eras fighting for different causes: taken together, the installation offers the idea of ​​a political uprising as an inevitable part of the human condition.

This may feel basically right after last year’s Minneapolis protests seemed like a repeat of Ferguson’s 2014 protests. But Kaino’s thesis is also seriously depressing: people are not forced to fight for change because they are in the stars, but because those in power will not loosen the death grip on their lives.

US Well being Specialists: Vaccines Will Improve by Spring