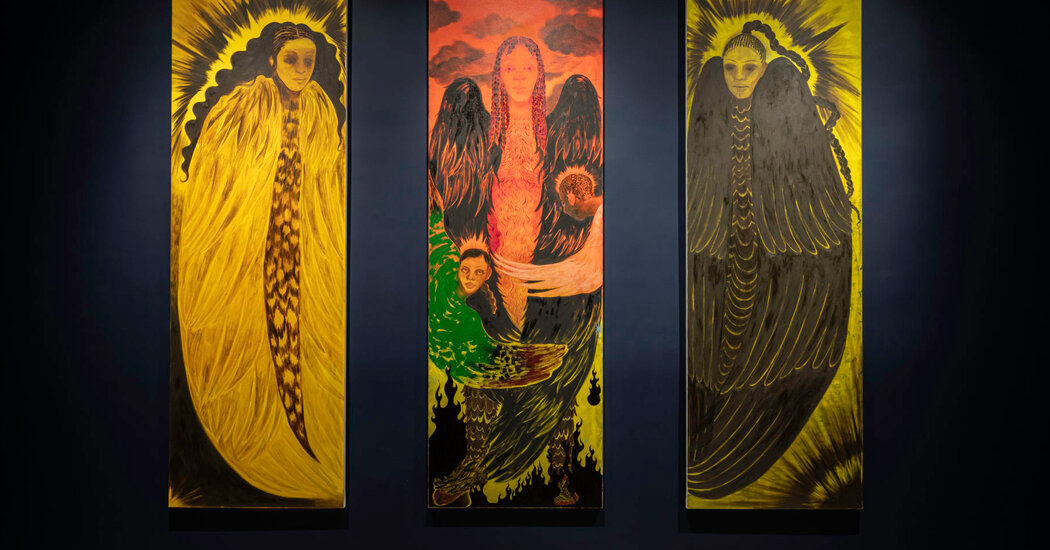 For many decades, the Studio Museum at Harlem’s annual artist-in-residence exhibitions has been an event of relentless interest, with most showing off three emerging young artists in recent years, including some of the best we have. This year’s edition also keeps the winning streak going in an unusual location: while the new David Adjaye-designed building of the museum in Harlem is under construction, the current show (like last year) will take place at MoMA PS1 in Long Island City, Queens .

According to an exhibition essay, the title’s “vessel of longing” is basically the black body. And while this year’s three artists are at least tangentially connected to a current, strongly marketed trend in black portraits, they expand and complicate the figurative tradition in a refreshing way.

In large-format paintings in lush citrus colors, Naudline Pierre places her own image in a mystical realm of winged female beings – angels, ancestors – who are involved in conflict scenes and mutual protection. In the culturally syncretistic, rainbow-colored universe that she creates, the liberation poet William Blake, the mythical black painter Bob Thompson, and religious artists of many places and beliefs would feel equally at home.

The artist and musician E. Jane proposes a different but related female empyrium, a cyber realm dedicated to the black divahood. Through the person of an alter ego pop star named Mhysa, the artist projects the power and fame of pioneering artists from the recent past – Diahann Carroll, Whitney Houston – and presents them as avatars of a black feminist future. E. Jane, who released an album called Nevaeh last year, embodies this vision in a multi-part environment that includes lyrics, neon signs, digital prints, mirrored walls, and videos. It is up to the beholder to put the pieces together and clarify the meanings. For once, the diva doesn’t do all the work.

In Elliot Reed’s installation we are surrounded by the physical presence of the artist: the color of the gallery walls is derived from a digital color scan of his skin. The potential danger associated with black skin is the subject of a multi-channel video that is at the heart of the installation. It is based on a crime in which a wealthy white man, Ed Buck, a prominent Democratic Politician in California, was accused in 2019 of providing drugs that resulted in the deaths of black men he hired for sex. During his residency at the Studio Museum, Elliot wrote an account of the case from the perspective of a strange black man. In the video he dramatizes this text with an extraordinary, self-executed choreography of vocalization and movement.

The exhibition was organized by Legacy Russell, associate curator for exhibitions at the Studio Museum, in collaboration with Yelena Keller, a curatorial assistant at the museum, and Josephine Graf, an assistant curator at MoMA PS1. Russell is responsible for other recent notable work. One of them is the important “Glitch Feminism: A Manifesto” (Verso Books) from last year, in which E. Jane plays a prominent role. Another is the lively online video exhibition “Lean,” a collaboration with Performa with an intergenerational cast of seven artists: Justin Allen, Jen Everett, Devin Kenny, Kalup Linzy, Rene Matic, Sade Mica and Leilah Weinraub. (It can be seen on performa-arts.org until March 31st).

It has long been taken for granted that some of the most interesting new works of art at any given time are made by artists who identify as black. And thanks to attentive, astute curators like Russell, we get to know them. HOLLAND COTTER

Some works of art, like some people, are talkative and loud and require attention. Others, such as Mildred Thompson’s “Wood Pictures” and geometric paper collages that can be seen in “Throughlines, Assemblages and Works on Paper from the 1960s to 1990s” at the Lelong Gallery, are rather silent. They draw your attention with calm dignity, elegant craftsmanship, and conciseness.

Thompson (1936-2003) was born in Jacksonville, Florida, studied at Howard University, and made the rounds of various renowned American art institutions and residences in the 1950s. Your work is in close contact with the art of the country in the 20th century. The biomorphic wood sculptures in her series “Vespers” from the 1990s go back to artists who have something to do with Abstract Expressionism, such as David Smith, Julio González and Louise Bourgeois. The extraordinary assemblages from the 1970s, which Thompson called “wood pictures” and which were made from interlocking strips of found wood, are in dialogue with Louise Nevelson’s huge wooden structures and Donald Judd’s idea of ​​minimalist “specific objects” that combine sculpture and painting. The “wooden pictures” are also reminiscent of more modest structures such as huts and huts that were carefully and sparingly built.

Why does Thompson remain virtually unknown? Partly because she lived in self-imposed exile in Europe on her return from Hamburg in 1961 after encountering racism and sexism in the United States. We are, of course, in an era of renewed and reinvigorated accounting, and Thompson’s art serves as a reminder that not all of history’s great artists speak aloud or have been heard. MARTHA SCHWENDENER