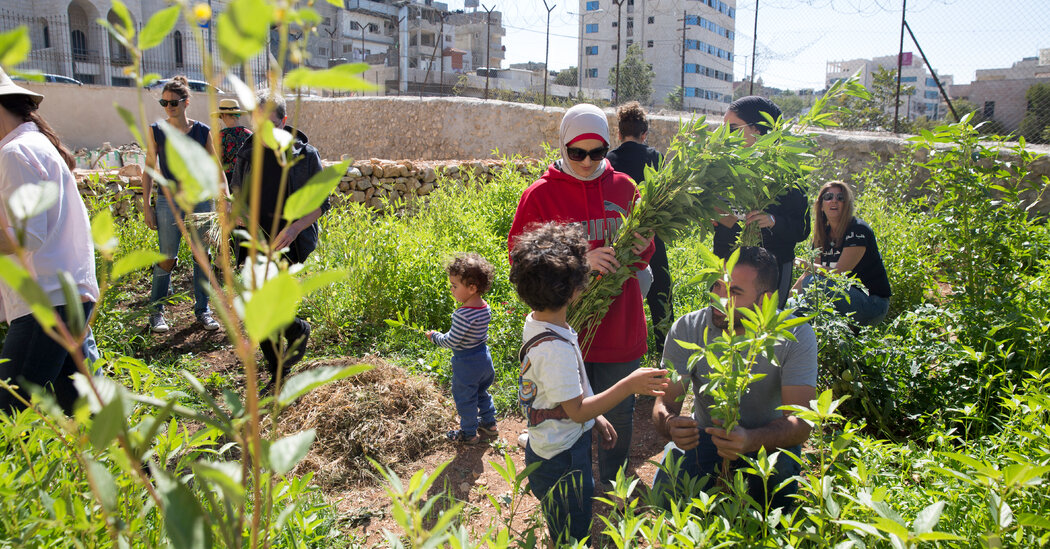 One of Dima Srouji’s most vivid childhood memories of her hometown Bethlehem occurred in front of the Dar Jacir house. It was the year 2000 and she and her mother were driving past the historic but dilapidated 19th century mansion along the main street between Jerusalem and Hebron when they were stopped by a group of young Palestinian men who were pushing them to open the windows crank up and find another way to get there. The second intifada had begun and the air was heavy with tear gas.

Almost two decades later, Srouji returned to Dar Jacir, now the Dar Yusuf Nasri Jacir Center for Art and Research, as artist-in-residence. “For me it is very powerful and very empowering to occupy this space again 20 years later as a defender and cultural actor in this space,” she said in a telephone interview.

Srouji, architect and artist, is part of a cohort of 22 residents and dozens of other collaborators – dancers, landscape architects, musicians, filmmakers, and writers – from the Palestinian territories and around the world who come to Dar Jacir to create work Workshops with local artists and residents, and for many to get to know everyday life in the West Bank.

The stately stone house was built in the 1880s by Yusuf Ibrahim Jacir, the Mukhtar (town council official). It was lost to the family in bankruptcy in 1929. It served as a prison and army headquarters during the British Mandate and was the location of more than one school after 1948.

In 1980 Dar Jacir was bought back by a family member. In 2014, Yusuf Nasri Jacir – great-great-great-grandson of the original owner – along with his daughters, artist Emily Jacir and filmmaker Annemarie Jacir, decided to transform it into a center for art and culture. Artist residencies and programs open to both artists and the public, launched in 2018.

The location of the house made the project both challenging and necessary, according to Emily Jacir. The Israeli security barrier, which cordons off Bethlehem and the West Bank, runs in the middle of the street in front of the house, with a watchtower and main checkpoint one block from its door. The Aida, Dheisheh and Azza refugee camps are nearby. The street outside the wrought iron gates of Dar Jacir is a focal point for confrontation between Palestinian protesters and Israeli security forces. Sometimes the clashes spill past these gates, like in May.

But it’s about perseverance in the face of this reality. “Yes, it is a difficult location, but we are not going anywhere,” said Aline Khoury, the centre’s manager. “When there are times of tear gas and collisions and so on, OK, we have our emergency situation, we get out, we take care of ourselves, we take care of our artists, but the next day we are back in, we clean” up, and we carry on. “

Right at the start of the renovation, Vivien Sansour, an artist, anthropologist and conservationist living in Bethlehem, and Mohammed Saleh, a permaculture designer and activist, also from Bethlehem, took on the task of creating the terraced gardens of the site – a traditional form of urban agriculture – revive in the region.

The first thing they had to do was clear the floor of hundreds of tear gas canisters that were scattered around the property. “I brought 16 young volunteers with me to clean a tiny patio – just clean the shrapnel, the canisters, the jar from the earth,” Sansour said in a video interview. “It took a long time – how do you literally clean the floor to bring it back to life?”

Sansour’s artistic practice is to revive forgotten farming practices; She founded the Palestinian Heirloom Seed Library. During their stay, she and another resident, Ayed Arafah, built what they called the Traveling Kitchen so that Sansour could cook meals for local residents while sharing knowledge of Bethlehem’s agricultural heritage with the aim of “agrarian resistance”: growth as a political act and a form of remembering.

On one of Dar Jacir’s terraces, she planted a piece of jute mallow – an ingredient in one of Palestine’s traditional main dishes, mulukhiyah – surrounded by vibrant zinnias. She called the project “home” and invited neighbors to take part in the laborious harvest of greenery, to cook and eat together.

Saleh, meanwhile, used a piece of land in Dar Jacir to create the Urban Farm – a testing ground for highly efficient cultivation methods that Bethlehemites can emulate so that even the smallest splinter of soil can be productive. The project is urgent, Saleh said, because the security barrier and the advance of Israeli settlements have largely cut off the Bethlehemites from surrounding farmland and olive groves. “The question was, how can you be a farmer without land?” Said Saleh.

“I found this terrible symmetry that instead of collecting flowers in the garden, we collect tear gas canisters,” said Michael Rakowitz, the Chicago-based artist, of his 2015 visit to Dar Jacir. The experience brought him back to a workshop in 2018 lead, which consists mainly of local artists, with the title “On the Question of Making Art in a City Under Siege”. “We started meeting in the garden and then the idea was just to meet everyone on the block,” he explained.

The workshop ended with a barbecue where Rakowitz and other artists cooked for anyone who wanted something to eat and the local community could meet their local artists.

No wonder food plays such a big role here. In the late 19th and early 20th centuries, the Bethlehemites said “the food is in Dar Jacir,” and residents and travelers alike could eat for free. Because of this story, says Emily Jacir, “hospitality is an important aspect of our project, the right of hosting.”

Sound is also an important part of the centre’s activities. The Chilean-American composer Nicolás Jaar came in 2019 for a two-week residency. He built an old warehouse on the property into a recording studio for guest artists (many from Latin America, where there is a large Palestinian diaspora) and for locals to participate in programs and workshops. Children from the Aida and Dheisheh refugee camps learn the basics of electronic music here.

There is a decidedly non-institutional atmosphere. The Jacirs have largely avoided funding from government and non-governmental organizations to avoid restricting the center’s activities or putting pressure on artists to achieve tangible results, Jacir and Khoury said.

“I think Dar Jacir is a very special place that does something very different from other cultural areas,” Jacir told me via email. “It’s really run and directed by artists. In many cases, artists come to us because they feel comfortable or more welcome, and I think that’s a strong part of us. “

Dar Jacir’s independent, collaborative and interdisciplinary model – as well as his ethos of generosity – reflects the spirit of Emily Jacir’s art, which was awarded a Golden Lion at the 2007 Venice Biennale and a Hugo Boss Prize in 2008 for work dealing with the circumstances of the Palestinian community and the conditions of exile. But the relationship is mutual, she said: “On a very personal level, this house was the root, the real anchor – yes, the foundation – of all of my artistic practice. You could say that everything radiates from here. This is my center. “

In a play shown at the 2020 Berlin Film Festival entitled “Letter to a Friend” – an intimate video letter to her friend Eyal Weizman (a founder of the investigative collective Forensic Architecture) about her experiences in Bethlehem – Jacir’s narrative speaks of her expectation that Dar Jacir would eventually find himself in the violence that happened outside his gates.

Her prediction came true on May 10th. In the unrest following an Israeli police raid on the Aqsa Mosque in Jerusalem, protesters gathered at the watchtower near the center. During a clash between Israeli security forces and Palestinian protesters, a stray projectile landed on the grounds of Dar Jacir and started a fire that set the Urban Farm on fire. Jacir directed the staff and artist residents to leave. Days later, on May 15, during a silent vigil outside Dar Jacir on Nakba Day – a commemoration of the mass displacement of the Palestinians in 1948 – witnesses said they saw Israeli security forces enter the compound and ransack the empty building. Windows were broken, doors kicked and equipment taken.

In response to inquiries from the New York Times, officials from the Israeli military and border police denied any knowledge of a raid or equipment seizure.

Dar Jacir’s team is now taking stock of the damage and making plans for rebuilding it. A fundraiser by a group of US-based artists and art historians has raised more than $ 35,000 for this purpose. Other artist and filmmaker-led fundraising events take place in London and Italy. Emily Jacir and Khoury estimate the damage at over $ 40,000.

For many of its former residents, the reconstruction cannot come soon enough. Srouji remembers her childhood Bethlehem as a cultural hub, with musical and theatrical performances transforming the city into a thriving, even euphoric, place of opportunity. “Dar Jacir was the only time, now almost 20 years later, that I’ve experienced that again – where I’ve found a space in the city I come from, where I grew up, where I have that kind of energy could feel again. “