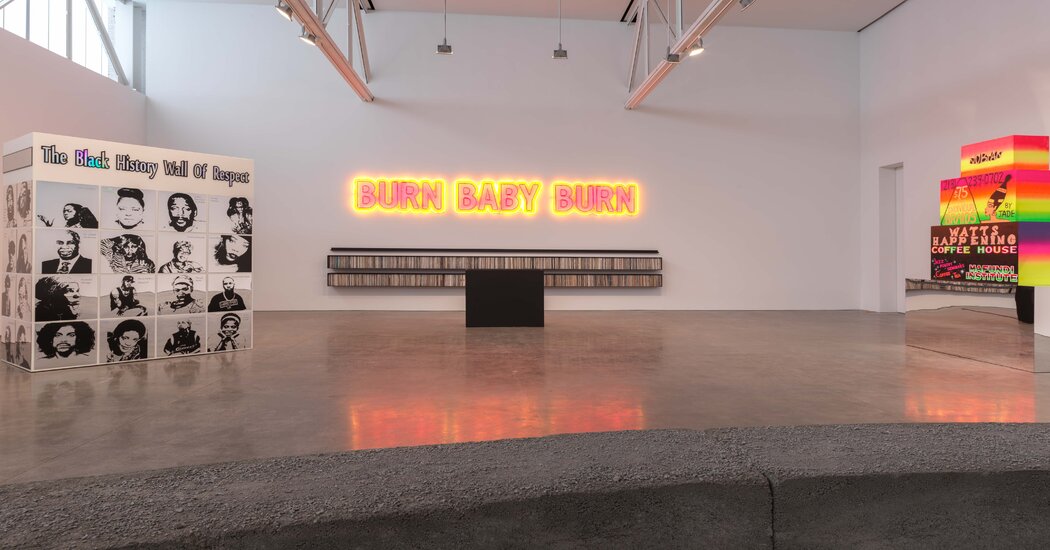 In the form of the group exhibition “Social Works”, a cool breeze is blowing through Gagosian’s galleries on West 24th Street this summer, organized by Antwaun Sargent – curator, critic and author of “The New Black Vanguard: Photography Between Art and Fashion” – in his debut project as a Gagosian director.

The 12 artists span generations and formal disciplines. And in the work here, which was largely created in the final year of the pandemic, they examine part of the vast social landscape that encompasses black as an identity. Part of the site is part of the history of textbooks. The “bitter trade” in Titus Kaphar’s painting of the same name is European colonialism and slavery. A turbulently structured wall relief by Allana Clarke made of rubber and hair glue with the title “There Was Nothing Left for Us” suggests a silhouette of continental Africa. Four large abstract collage paintings by the architect and social organizer Rick Lowe, famous for Project Row Houses, take the “Black Wall Street” in Tulsa, Oklahoma, destroyed in 1921, as their theme and are reminiscent of aerial maps of wartime bombings.

The show also brings the definition of black social territory into the proactive present. At the forefront of efforts to revive Chicago’s South Side, Theaster Gates resurrects the spirit of local pop deity DJ Frankie Knuckles (1955-2014) in an altar-like installation of 5,000 record albums once owned by this Chicago house music -Pioneers were. In a series of large box-shaped sculptures, Lauren Halsey cites commercial signs from South Central Los Angeles to give a sense of how daily life is changing in the up-and-coming neighborhood where she grew up. “Yes, we are open and yes, we belong to Black,” it says in one piece. “Sons of Watts Community Patrol” is another. The largest piece, “Black History Wall of Respect (II”), does not need any texts: the portraits of guardian spirits of the place from Malcolm X to Nina Simone speak for themselves.

Halsey’s investment in her neighborhood also has a convenient street-level extension. There she helped set up a grocery bank called Summaeverythang, which brings fresh, free, organic produce to the “food wasteland” community in southern Los Angeles. And she has a strong example in the work of influential art historian and gallery owner Linda Goode Bryant, who launched the urban farming initiative called Project EATS in New York City in 2009, the large-scale demonstration model of which is at Gagosian.

In the 1970s and 1980s, Bryant transformed the city’s cultural landscape with her gallery Just Above Midtown by introducing contemporary black artists to a wider art audience. Here, too, younger figures like Kahar follow their example. Several years ago he co-founded NXTHVN, a dynamic mentoring workshop in New Haven, Connecticut, where he lives. Five resulting artists – Clarke, Zalika Azim, Kenturah Davis, Christie Neptune and Alexandria Smith – can be seen in Sargent’s exhibition.

In short, the exhibition sensibly mixes current market-ready definitions of “black art” (there is almost no figure painting here) and locates art of “social practice” both inside and outside the conventional art world of galleries and museums. Gagosian is of course deep in this world and deeply conventional in every way. In fact, the most surprising thing about “Social Works” is that you can even find them there. So it will be interesting to see whether black artists stay casual visitors or become full-time settlers on this particular piece of market lawn. And it will be interesting to see to what extent the gallery will allow a smart new director to expand the field.