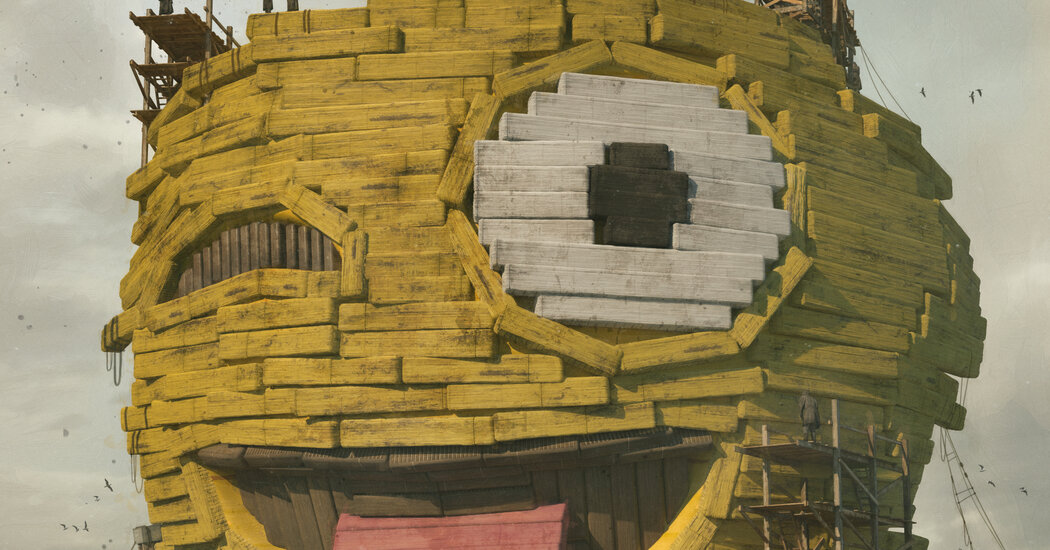 Mike Winkelmann never called himself an artist. But that was before he made $ 3.5 million selling his artwork in a single weekend. In December, he auctioned multiple editions of three digital artworks priced at $ 969 each and 21 unique works, most of which sold for approximately $ 100,000 each. It was only the second time that he had put his art up for sale.

Beeple’s digital artist has made a drawing every day for the past 13 years. He started out with pen and paper but now mainly uses computer software such as the Cinema 4D program. A two-week online auction of a composite from the first 5,000 days of the project begins on Thursday at Christie’s. This is the auction house’s first sale of an exclusively digital work of art. It will also be the first time Christie’s accepts payments in the cryptocurrency Ether.

Beeple sells these works as NFTs – non-fungible tokens – digital collectibles that use blockchain technology for authentication. An NFT can take any form, but for Beeple it usually consists of an image or video file, sometimes with a physical object verified with a digital signature on a blockchain. NFTs cleverly respond to the art world’s need for authentication and provenance in an increasingly digital world, permanently associating a digital file with its creator. It makes digital works of art unique and therefore salable.

The speculative market for NFTs has skyrocketed in the past 12 months and continues to grow. According to the 2020 NFT report published by L’Atelier BNP Paribas and Nonfungible.com, the value of the NFT market tripled in 2020 and is currently over $ 250 million. The same investors who speculate on cryptocurrencies are now trading on sites like MakersPlace (which works with Christie’s on the Beeple sale), SuperRare and Rarible, which is where the most recent deals take center stage. Memes and graphic collectibles are sold alongside works of art like Beeple’s, blurring the line between them.

Although this is the first time Christie’s has sold a purely virtual work, the art world is familiar with this sales genre. For example, anyone could tape a banana to the wall, but it wouldn’t be Maurizio Cattelan’s “Comedian”. Likewise, someone could easily make a digital copy of Beeple’s “Everydays – The First 5000 Days”, but while the content would be exactly the same, they would not own the artwork itself without blockchain verification. NFTs allow the collection of digital works of art in a similar way to painting, sculpture, or conceptual art.

“I don’t know anything about the traditional art world,” said Beeple, a computer science graduate who only started researching NFTs in mid-October. Although he was a newcomer to both the visual arts and crypto art, his 13-year project “Everydays” has become popular online. He has a huge following (nearly two million on Instagram, 200,000 on Twitter) with his apocalyptic, warped aesthetic that led to commissions from brands like Louis Vuitton, whose spring 2019 collection was adorned with his images.

Beeple’s work looks like a political sketch cartoon in a dystopian video game. Politicians like Donald J. Trump, Kim Jong-un and Hillary Clinton (often naked with mutated robotic bodies) as well as Buzz Lightyear, Mickey Mouse and Pikachu. Since Winkelmann creates one drawing a day, his work often ripples over the events in the news and instantly converts internet culture into visual commentary. It’s a style that speaks the native language of a cadre of speculators with meme knowledge, many of whom have made huge sums of money from technology and crypto investments.

After an initial “drop” (a term with streetwear overtones) from NFTs in October, Winkelmann decided to conduct its December sale through the Nifty Gateway website. The sale broke the top Digital art records within five minutes. Many buyers immediately resold the works at higher prices, and their initial investment multiplied within minutes. Today, many of these works sell for more than 1,000 percent of their original price.

“That was a real wake-up call for all of us,” said Noah Davis, post-war and contemporary art specialist at Christie’s, “to see such significant sums being paid.”

“We’re facing a possible paradigm shift,” Davis continued, citing the recent boom in cryptocurrencies and this year’s GameStop uprising against Wall Street as evidence that financial markets are changing rapidly.

Beeple works with two giant television screens that are always on, one on Fox and the other on CNN, both muted, on the wall of his studio, which also has a leather couch and beige carpeting. Reached for an interview at Zoom, he was enthusiastic and disrespectful, had a cheeky demeanor, neatly parted hair, and wore a gray half-zip sweater with a button underneath. In short, it offered you technical support rather than a radically new medium for artwork.

Beeple felt dismissed from the art world for a long time. He is very excited about this crypto-driven reversal. These works, most of which he casually refers to as “crap,” are suddenly anointed by one of the art world’s most revered auction houses. “The traditional art world is like ‘who is this kid?’ But I also have 1.8 million followers on Instagram,” he said. “The Christie thing brings some confirmation of that.”

The art world “is finally starting to recognize digital artists as real art,” he added.

For quite a number of digital illustrators and graphic artists who are struggling to make a living from their jobs, this is a game changer. NFTs are a do-it-yourself shortcut to bypass the establishment gatekeepers. “There is an argument for this as ‘punk'”, said Ruth Catlow, researcher and curator at the decentralized art laboratory Furtherfield in London and editor of the book “Artists Re: Thinking the Blockchain”. “It speaks to the battered dignity of a suffering class of artists who are constantly struggling to earn a living but are devalued by the higher machines of the art market and marketing platforms.”

However, the huge sums of money made with NFTs tell a different story. As a rule, the art world despises “turning around” – when a collector buys a work and then immediately resells it for a profit. Unlike traditional works of art, with NFTs, the blockchain that authenticates the work can also create a set of rules that govern future use. For example, Beeple’s contract will ensure that he makes money as an artist when others are speculating about his work – in his case 10 percent of all sales in the secondary market (an industry standard for NFTs). With that in mind, NFTs provide a model for artists to capture the value of their work as it grows. “When you buy the work of art, you have some kind of relationship with me,” he said.

Catlow said in a video interview, “They allow these artists to program a series of contracts with the collectors into the work.”

She added that she viewed the Beeple sale at Christie’s as “pure spectacle”, a “financial event” as many artists migrate to platforms like Zora and Foundation creating DAOs (decentralized autonomous organizations) that allow them to share community value to put art speculators in the foreground. “You can see these programmable works of art as a way to create new forms of relationships,” said Catlow.

This opens up more radical ways of sharing the profits from artwork using NFTs. Artist Sara Ludy, for example, recently announced that she was proactively negotiating a 7 percent profit for each of the workers in her gallery, Bitforms, for future NFT sales. “I wanted to provide an example of one of the many ways funds can be redistributed in this new market,” wrote Ludy in an email.

“At least that’s the first time I’ve seen artists have the upper hand in a market,” she said. “It’s a really great feeling.”

Like many artists looking to coin NFTs, Ludy is also concerned about the huge environmental impact of the cryptocurrency, of which Bitcoin is the worst offender. However, NFTs, which run mostly on the separate Ethereum network, are rapidly switching to a proof-of-stake model (as opposed to the current proof-of-work model), which is not only more energy efficient but also faster and cheaper – incentives that could encourage the relocation.

The low barrier to entry (theoretically anyone can shape an NFT) and the outsider mentality offer an obvious parallel: street art. “I think they’re similar as they disrupt traditional categories for collecting contemporary art,” said Davis of Christie’s.

However, Beeple kept an eye on the numbers, noting that Christie had auctioned 21 works by Banksy in September, the same number of works as his $ 3.5 million drop. “Only they,” he paused to air-quote the last word, “did $ 2.9 million,” he said before bursting out laughing.

The estimate of his own Christie’s auction? “Unknown.”