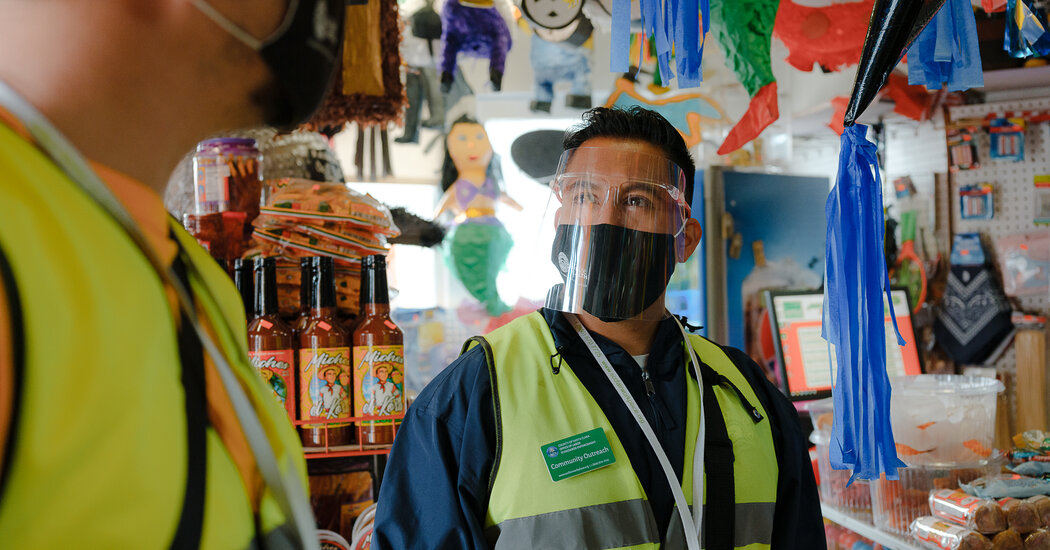 SAN JOSE, California – On an unusually warm February day, two men who worked with a local community group went door-to-door in an ethnically diverse neighborhood trying to convince people to sign up for Covid-19 vaccinations.

It was just after 11 a.m. when they came across the first person who was reluctant to get a shot. Two doors down and 30 minutes later it happened again. For almost an hour they stood on a lawn with George Rodriguez, 67, talking about the neighborhood, the pandemic and the vaccines available.

“I see all of these things online about how it’s going to change my DNA. It has something to do with your DNA, right? “Asked Mr. Rodriguez, who is Spanish. “There is just too much stuff, too much conflicting information. And then I hear that even if you get the vaccine, you can still get sick. Then why should I get it? “

The misinformation varies, such as claims that vaccines can alter DNA – which is wrong – and that vaccines don’t work, or that people of color are used as guinea pigs. Much of this misinformation comes from friends, family members, and celebrities rising up in communities particularly hard hit by the pandemic and facing other vaccination hurdles.

Foreign news outlets and anti-vaccine activists have also aggressively tried to question the safety and effectiveness of US and European-made vaccines.

Misinformation has hampered some states’ efforts to reach Black and Hispanic residents, especially when health officials have provided special registration codes for vaccine appointments. Instead of a benefit, in some cases the codes have become the basis for new false narratives.

“What it might look like on the surface of doctors prioritizing color communities, some people read online, ‘Oh, these doctors want us to be the guinea pigs first,” said Kolina Koltai, a University of Washington researcher who studies online conspiracy theories “I’ve seen people on Facebook, Twitter, YouTube, Clubhouse – what you call it – saying the codes are a way of experimenting with imposing the vaccine on the color communities.”

Research conducted by the nonprofit Kaiser Family Foundation in mid-February showed remarkable inequality between racial groups who received the vaccine in the 34 states where the data was reported.

While researchers say a lack of easy access to vaccination sites could be the main reason behind this shortage, misinformation does play a role.

The belief that doctors are interested in experimenting in certain communities has deep roots in some groups, Ms. Koltai said. Anti-vaccine activists have cited historical examples, including Nazi doctors who conducted experiments in concentration camps and the Baltimore hospital, where cancer cells were collected without their consent 70 years ago from Henrietta Lacks, a black mother of five .

“The thing about misinformation is that it works best when it’s built around a core of truth. In this case, many color communities don’t trust the medical establishment because they don’t have the best history with it, ”said Shireen Mitchell, founder of Stop Online Violence Against Women, a group that supports women of color who are molested online.

An experiment on nearly 400 black men in Tuskegee, Alabama, begun in 1932, is one of the best-studied examples of medical abuse in the black community. For four decades, scientists watched the men they knew were infected with syphilis but offered no treatments to study the progression of the disease. When the experiment came to light in the 1970s, it was condemned by the medical community as a grave violation of ethical standards.

Researchers studying disinformation followed mentions of Tuskegee on social media for the past year. While Tuskegee averaged several hundred mentions a week on Facebook and Twitter, there were several notable spikes that coincided with the introduction of Covid-19 vaccines, according to Zignal Labs, a media literacy company.

In the last week of November, when pharmaceutical companies Moderna and Pfizer announced promising results in their final studies on the safety of their Covid-19 vaccines, mentions of Tuskegee rose to 7,000 a week.

There was another hiatus until mid-December when the Food and Drug Administration announced that it had approved the vaccines in an emergency. Tuskegee mentions soared to nearly 5,000 this week, with some of the most viral tweets referring to the coronavirus vaccines as the “New Tuskegee Study,” according to Zignal.

Indian groups have battled vaccine fears in their communities, and doctors have reported that some of their Sino-American patients have published articles in Chinese-language media questioning US-made vaccines.

Many black and Hispanic Americans have struggled to make appointments and reach vaccination centers, often in whiter, richer areas. And officials in some cities say people from those neighborhoods have also flooded vaccination termination systems and received supplies for poorer Black and Hispanic residents.

Misinformation about who can get the vaccine, when it is available, and how it has been tested for safety has created even more trouble, Ms. Mitchell said.

At a mass vaccination site at Oakland Coliseum on a Friday afternoon, before 68-year-old Anthony Jones agreed to get his shot last month, there was only one last thing he wanted to look up on Facebook. He took out his cell phone and started typing. He waved off his grandson, who had driven him to his appointment.

“I read about a woman who died of this thing and I want to know if she’s black,” said Mr. Jones, who after a few minutes of scrolling could not find the Facebook post he was looking for. “You see a lot of things on the internet that make you think that if you are black, you shouldn’t be taking this vaccine.”

Mr. Jones finally gave up. When he walked in for his recording, he remembered the article he had seen on WhatsApp owned by Facebook and from a website he did not recognize.

“My grandson tells me not to believe everything I read on the Internet,” he said. “I like to believe my grandson.”

The next day Daniel Lander (38) advertised with Armando Mateos (28) in a neighborhood in San Jose. For the past five months, Mr. Lander has been going door-to-door in Silicon Valley on a program run by Working Partnerships USA, a community-based organization. The group is working with local county officials to clear up misinformation about the pandemic and vaccines.

“We hear people say that they saw this or that celebrity share something on Twitter or Instagram that made them think the vaccine was a bad idea. People value the opinions of the people they look up to, and these celebrities make a huge impact, ”Lander said.

While chatting with Mr. Rodriguez, a muscular man and enthusiastic public speaker, Mr. Lander and Mr. Mateos said they understood his concerns. They said they had many of the same questions and explained their decision to get the vaccines themselves. Mr Rodriguez asked where they got their recordings from and how they felt.

Mr Mateos reflexively touched his left arm where he had received the vaccine for the past few weeks. It hurt, he said, and he wasn’t going to gloss over it. But he was convinced it was safe and that it would keep him and his loved ones from getting sick.

“You have read all of these things online from various news sources, which is confusing. But then you hit me as someone who got the shot and I can give you some real answers, ”said Mateos. He added that many people cited articles in the Spanish-language versions of the Russian state-backed media networks Sputnik and Russia Today. “You are very depressed about the American vaccines. People read these stories and don’t want to get the shot. “

As the two men left, Mr. Rodriguez yelled that he would get the shot that week. They made sure he had the phone number and websites he needed to register and walked down the street.

“I think I’ll get it later this week,” said Mr Rodriguez. “I don’t make promises, but I think you won me over.”