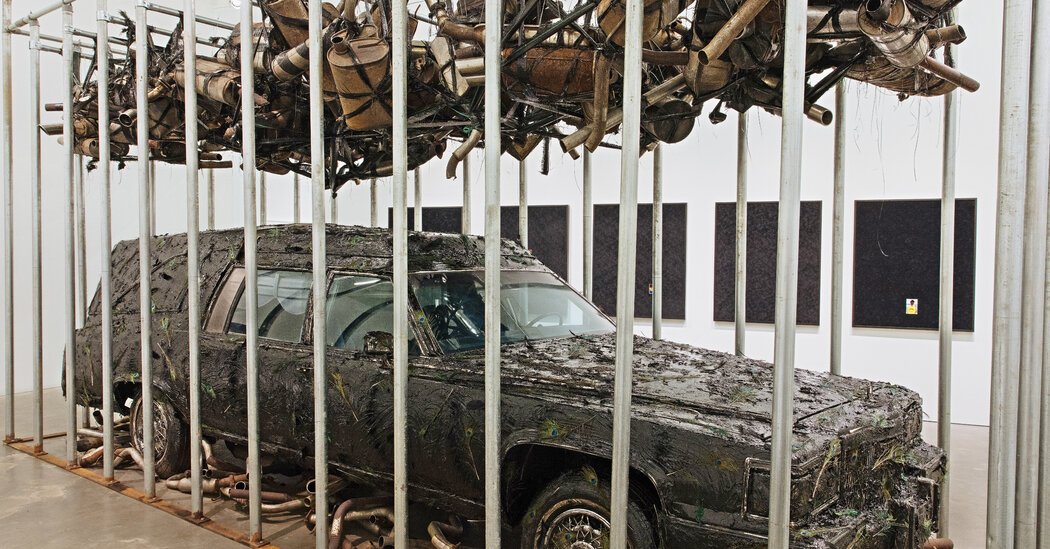 When it comes to racial justice, the United States has built terrible karma over the centuries. And in the last four divisive years the festering wickedness in the form of white nationalism has been visible to the whole world. The Nigerian-born curator Okwui Enwezor saw it and the passionate exhibition “Mourning and Mourning: Art and Mourning in America” ​​in the Neues Museum was his direct and personal response, which he conceived as a moral broadside and which he wanted to advance the 2020 presidential election.

Fate intervened. Enwezor succumbed to cancer in 2019 at the age of 55, a loss that was lamented throughout the international art world and which he had helped to shape through his echoing exhibitions and books. At that time four of his long-term colleagues – Massimiliano Gioni, the artistic director of the Neues Museum; the artist Glenn Ligon; Mark Nash, professor of art history at the University of California at Santa Cruz; and Naomi Beckwith, a senior curator at the Museum of Contemporary Art in Chicago and soon to be deputy director and chief curator at the Guggenheim Museum – teamed up to create his show. Based on his notes and conversations with him, they collected the art he specified, made some of their own additions and published a catalog.

When I went through the book before it opened, I had reservations about the project. Most of the 37 black artists included are known and widely used, as are some of the individual works. I wondered if, despite the severity of its theme, the show would basically not feel like an endorsement of a contemporary art canon, a cavalry of stars.

At best, however, curating is far less about singularity than synthesis, the alchemy of bringing things together, to ignite and amplify ideas. Enwezor had a brilliant eye for such a creative amalgamation and has achieved exceptionally moving results in an exhibition that is sure to be considered one of the most important of 2021. It is a fitting tribute to its creator, an honor for a team that has seen it through, and a worthy setting for the artists who have contributed, including some of the greatest we have.

The title describes the intertwined themes of the show: black grief in response to white racial aggression and white grief fueled by a feared loss of dominance and control. A sense of their fleeting chemistry is distilled on the facade of the New Museum in a Glenn Ligon piece of text in which the phrase “Blues Blood bruise” is written in large white neon letters from an interview with a teenage boy from Black New York City. Daniel Hamm, who was arrested by the police in 1964 and brutally beaten.

The issue of racial tension is taken up directly in the museum. For a conceptual work entitled “Presumption of Guilt”, the artist Cameron Rowland provided the entrance door with an alarm bell, as is used in commercial shops to warn the owners of the presence of potential theft customers.

And another artist, Adam Pendleton, has screen-printed the lobby walls with graffiti-style signage, a form of public writing that is often associated with urban lawlessness and, implicitly, black in the white-dominated news media . Pendleton specifically plays with those expectations by including examples of graffiti protesting the 2020 police murder of George Floyd in Minneapolis.

Enwezor was allergic to narrow-gauge values ​​in categories such as “political art” and “protest art” (and incidentally “black art”). He advocated subtlety, ambiguity, and purposeful indirection, all of which were visible in different ways and to varying degrees in the work of three artists in the lobby gallery who introduced themes that echoed through the main exhibition rooms on the museum’s second, third, and fourth floors.

A short narrative film, “Alone” by Garrett Bradley, dramatizes the emotional cost of incarceration of black masses by looking at them through the eyes of a young woman whose lover is in prison. A finished sculpture of the remarkable Tiona Nekkia McClodden, consisting of a steel device used commercially to slaughter cattle, speaks of the murderous realities of slavery as part of this exhibition. A series of large photographs by Terry Adkins (1953-2014) with “souvenir jugs”, traditional Afro-American grave goods filled with relics, underscores the show’s function as a memorial to a rich, resilient culture and as a memorial to what has been lost to racism – Civil rights, live for Covid-19 – every day.

One of the show’s earliest pieces, installed on the second floor, is practically a civil rights reliquary. With the title “Freedom Now, Number I, August 13, 1963 – January 14, 1964” it is a compilation by Daniel LaRue Johnson (1938-2017) that was created in Washington in the months after March 1963 when he was through traveled the American south. As he walked, he picked up bits and bobs (a broken doll, a mousetrap, a hacksaw blade, and a “Freedom Now” protest button), attached them to a canvas, and smothered them in layers of black pitch, an everyday material that had some terrible associations of bodies with tar and feathers and torches.

For Enwezor this piece was one of the touchstone works of the exhibition, perhaps because it adds a load of reality from you to other, more recent works relating to the civil rights era. These include Dawoud Bey’s 2012 portrait series “The Birmingham Project”, a memorial to the four young girls who were killed in the 1963 bomb attack by terrorists of the Ku Klux Klan on the city’s 16th Street Baptist Church. and Carrie Mae Weems’ subdued photographic reimaginations of major events of the 1960s. Her painting, entitled “The Murder of Medgar, Malcolm, and Martin,” appears to be in a morgue.

And if there is one indelible symbol of “grief” on the show, it is Nari Ward’s installation “Peace Keeper,” which was originally made for the 1995 Whitney Biennale and then destroyed and recreated at Enwezor’s request for his show. Consisting of a battered full-size black hearse locked in a steel cage beneath some sort of storm cloud of rusted exhaust pipes and mufflers, it is materially overwhelming, even repulsive, a little frightening. Only when you stand nearby will you see delicacy: the surface of the car is speckled with iridescent peacock feathers.

Is “Peace Keeper” a “political” work? Hard to say. On the one hand, it seems to place blackness in an environment of confinement, stuck movement and ruin. But then there are the stinging traces of beauty: the feathers. Here, too, the humiliation of tar and feathers is evoked, but also a message of flight. And there is the title. This particular “peacemaker” appears to be a prisoner of war. All in all, the piece is not easy to read. Materially it is almost too much, but conceptually it is elusive and in that sense almost abstract, as is the case with much of the political art that Enwezor values.

There are strong examples of such art on the third floor of the museum. Howardena Pindell’s “Autobiography: Water (Ancestors / Middle Passage / Family Spirits)” is one: a collage image with the figure of the artist herself floating in spectral outlines on an ocean littered with deadly debris – body parts, the staring eyes. Another is Melvin Edwards’ great series of wall sculptures, “Lynch Fragments” – there are 10 examples in the exhibition, each a heavy knot of welded spikes, chains and screws. And Charles Gaines’ multimedia “Manifestos 3” is a third. In it, the admonishing words of James Baldwin and Martin Luther King Jr. were converted into a musical score, the recordings of which sound through the gallery.

Indeed, this show is both an acoustic and a visual experience. Sound is everywhere in one form or another. Some of it is actually silent, as in the case of Jennie C. Jones’ exquisite line drawings entitled “Score for Sustained Blackness, Set 3”. Some are coincidental: microphones embedded in Kevin Beasley’s floating sculpture “Strange Fruit (Pair 1)” pick up ambient noise in the gallery and amplify it.

And there is a lot of music on every floor. In the sharp suits of jazz singer Alice Smith, recorded on video by Kahlil Joseph. In Theaster Gates’ thunderous percussion jam with the Black Monks in a half-destroyed church. And in piano improvisations, sometimes recorded, sometimes live, taken from a cabana-like installation by Rashid Johnson that is part parlor, part greenhouse, and part Black History Library.

The Johnson piece is on the fourth floor, along with abstract paintings by Mark Bradford and Julie Mehretu. Together they form an ensemble that is bright and busy enough to indicate that by this point on the show, the grief may be over. We got beyond that and left them in the galleries below. However, such an impression would not be entirely correct.

As it turns out, the wall-sized Bradford picture traces the contours of a government surveillance map of the black neighborhoods in Los Angeles. Published in Watts after the 1965 uprising, it was an example of cartography used as a tool to control citizens. The four Mehretu paintings on display also contain political content. Half hidden beneath abstract patterns in one is a drawing of an image of the 2017 White Supremacist Rally in Charlottesville, Va.

But it’s another, less flashy piece on the fourth floor that most effectively embodies the karmic lock – a plague of white grief that meets an emergency of black grief – that gives the show its theme.

The work is an assemblage painting by Jack Whitten (1939-2018) entitled “Birmingham” and dates to 1964. Whitten was born in Alabama, was active in the civil rights movement there and fled the south in 1959 never to return . That doesn’t mean he didn’t look back. He did it in this little piece that was created after the 1963 church bombing in Birmingham.

The main image is a cropped news photo of an African American at a protest who is attacked by a white police officer with a dog – it looks like he’s being torn apart. (After being beaten in such a protest, Whitten took a one-way bus north.) In the piece, the photo is locked in a nest of molded aluminum foil, as if it were precious or radioactive. And the nest appears to have been half ripped open, as if it was being torn apart by a detonation stopped in the middle of the explosion.

Can the ongoing destruction be stopped or does it have to move forward? That is the question Enwezor insists on in his final, urgent show.

Grief and Complaint: Art and Grief in America