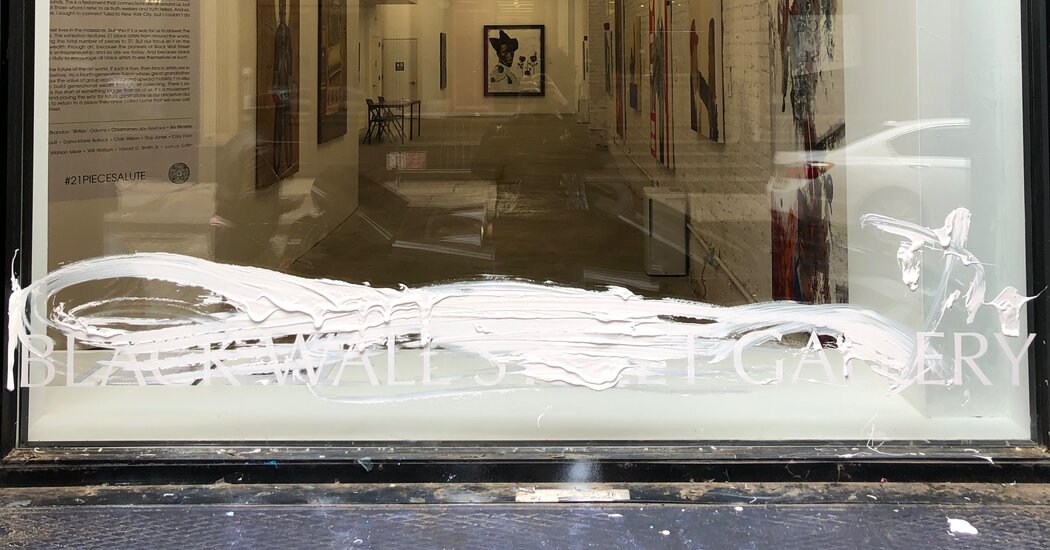 The owner and curator of Black Wall Street Gallery in SoHo, which is hosting an exhibition marking the 100th anniversary of the Tulsa Race massacre, said the exterior of the gallery was destroyed three times this week and ordered police to treat it as a hate crime.

The owner, Ricco Wright, said in an interview that the gallery on Mercer Street had been defaced on Sunday, Monday and Tuesday of this week and that white paint was smeared on the window at one point, causing the words “Black Wall “Street gallery was covered.”

“Literally a white wash,” Wright said in an interview on Thursday. “We’re going to leave that there and just put another vinyl sticker over it with the same writing to let them know when they’re low we’ll go high.”

“It was both intentional and intentional that someone washed Black Wall Street white on the very day the massacre happened 100 years ago,” he added.

Detective Denise Moroney, a New York Police Department spokeswoman, said authorities responded twice to calls about vandalism in the gallery – once on Monday and again on Tuesday. Police are investigating but have not made any arrests, they said, adding that the hate crime department’s task force was notified after both reports were filed.

One of the reports referred to “white paint” “painted over the letters on the shop front,” the police said; the second report said that someone had painted the letters “EDHRLL” on a shop window with white paint. A post on the gallery’s Instagram account also showed graffiti on the door that cryptically read “ETC REAL ART”.

Wright said he is urging police to not just investigate the vandalism as a hate crime, but to immediately consider it as such.

This month, gallery representatives attempt to honor the people who lost their lives in the 1921 Tulsa Race massacre, in which a white mob destroyed a vibrant African American community in Tulsa, Okla. The exhibition “21 Piece Salute” includes 21 pieces by 21 contemporary black artists and has been on view since May 27th.

A Black Wall Street gallery was first established by Wright in Tulsa in 2018. Then in October he opened an outpost in New York City at a different location in SoHo. The New York gallery just moved to its new address at 26 Mercer Street last week.

The original Tulsa gallery has been renamed Greenwood Gallery and is now run by his cousin Sequena Alexander, known as the Queen, and has taken over the lease. Wright ran for Tulsa mayor’s office in 2020 but resigned after being accused of sexual misconduct.

At a press conference at the gallery on Thursday, Wright was accompanied by Gale Brewer, president of Manhattan District, and Gregg Bishop, former commissioner for the NYC Department of Small Business Services, who said they would not tolerate hate in New York.

“We’re not giving in,” Wright said in an interview. “We, as a community, are focused on unity and love and will continue to do so.”