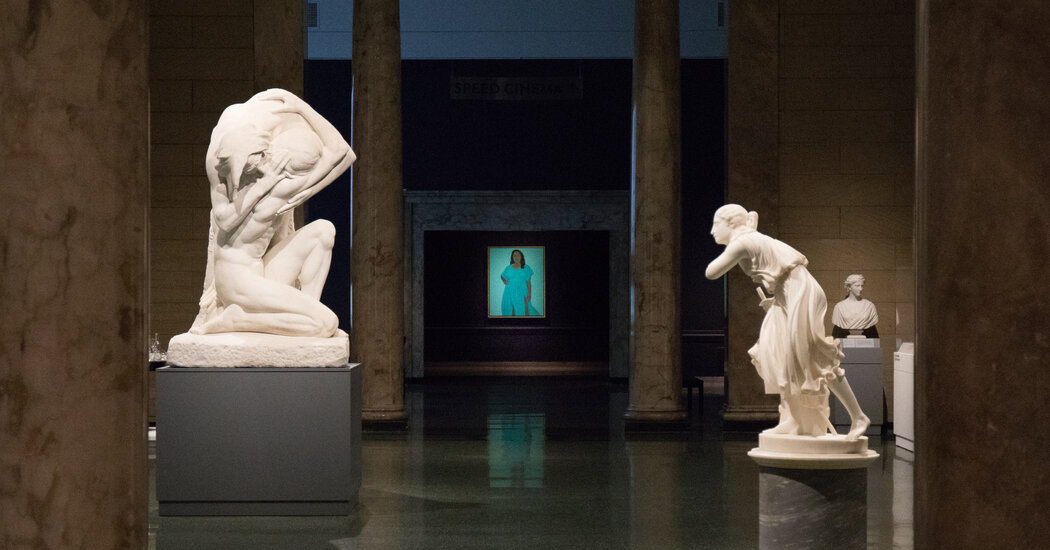 LOUISVILLE, Ky. – People talk a lot about getting back to normal before Covid. But our traditional art museums can forget that. After a year of intensive accounting for racial justice, a crippling pandemic, and crippling economic deficits, aging, hidden institutions are struggling only to stay afloat. And the only way for them to do this is to change. Forward movement strategies are required. One of them can be seen here in the Speed ​​Art Museum in the form of a calmly passionate show entitled “Promise, Witness, Remembrance”, which other institutions could profitably examine in survival art mode.

Traditional encyclopedic museums like Speed, the largest and oldest art museum in Kentucky, are glacier machines. Your main exhibitions are usually planned for years. Borrowing items from other museums can be a bureaucratic mess. “Historical” shows, by definition, are usually limited to events and cultures of the past. “Promise, Testimony, Remembrance” revises all of that. It speeds up exhibition production, focuses on the present, and thus reaches a new audience that is vital to the institutional future.

The exhibition combined works from the Speed’s permanent collection with loans in several cases directly from artists and galleries and was (beautifully) put together and installed in just four months. And it was designed in direct response to a contemporary news event: the murder of Breonna Taylor, a 26-year-old black medical worker, by the Louisville police force in March 2020. A posthumous painting of Taylor by artist Amy Sherald is the centerpiece of the exhibition , accompanied by photographs of local street protests sparked by her death and the indulgent treatment of the white officers involved.

The availability of the painting by Sherald, widely known for her earlier portrait of Michelle Obama, was what kicked off the show. Originally commissioned by Vanity Fair, it appeared on the cover of the September 2020 issue of the magazine. Sherald himself took an interest in the painting being shown at Speed, and in November the museum hired Allison Glenn, an associate curator of contemporary art at the Crystal Bridges Museum of American Art in Bentonville, Ark., To do it with astonishing speed and clarity built an exhibition in Louisville that consists entirely of black artists and whose funding keeps admission free.

Accessibility, cultural and financial, are key features of the show. So far, museums have generally ignored the country’s changing population demographics. The history that our great art museums of general interest promote through their preservation and display of objects is primarily white history through which the views of all other stories are filtered. However, this oblique perspective is no longer representative of the public that museums – purely pragmatically speaking – have to attract in order to survive.

Museums also tend to underestimate radical changes in awareness and interest in the past. In a social media century, more and more attention seems to be focused on the 24 hour news cycle. How can this new awareness be reflected in classic museums that pride themselves on being slow-reacting monoliths? Only when we stay lithe, ready and able to adapt, absorb, and adapt can our art institutions thrive.

In “Promise, Testimony, Remembrance”, speed provides an example of this dynamic. Working closely with Taylor’s family and Speed’s community relations strategist Toya Northington, Glenn quickly assembled advisory boards of artists and activists from within the city and across the country. In Speed’s permanent collection, she found solid material to build on, including works by several artists associated with the city. Pieces included a gorgeous, warmly hugged draped painting by Sam Gilliam, who grew up in Louisville, 1969. a sculpted bronze head of a Black Union soldier by Ed Hamilton who still lives there; and a number of strategically altered Ebony magazine pages from Noel W Anderson, who now lives in New York City.

Glenn then began asking for credit requests. Agreements were signed and pieces came in within what most museums thought was incredibly tight. The last one installed just before the opening was the Sherald portrait, which was jointly owned by Speed ​​and the Smithsonians National Museum of African American History and Culture in Washington DC with the help of a $ 1 million donation from two philanthropists , the Ford Foundation and the Hearthland Foundation (led by actress Kate Capshaw and her husband, director Steven Spielberg).

The resulting exhibition isn’t huge – around 30 pieces – but the museum has given it prime space and cleared three permanent collection galleries on either side of its sculpture-filled central atrium to accommodate them. This guarantees that individual works have room to breathe. It also symbolically offers a gesture of welcome on the part of a traditional museum to an exhibition of black contemporary art. (In contrast, the Metropolitan Museum of Art installed a truly regal Kerry James Marshall retrospective two years ago, not where it was actually found in special exhibition galleries at the museum’s Fifth Avenue headquarters, but in what was then the Breuer annex on the Madison Avenue.)

Glenn designed the show in three parts, each dealing with the themes of the title, all of which were suggested by Taylor’s mother, Tamika Palmer. The work in the first section, “Promises,” suggests the vaunted humanistic ideals of a nation and the abuse of those ideals. A wall piece by Nari Ward from 2011 contains the introductory words of the constitution “We the People” in letters made of colored shoelaces. In Bethany Collins’ “The Star Spangled Banner: A Hymnal” (2020), militant nationalist songs are burned into the pages of a book as if with acid.

The second gallery, “Witness,” loosely focuses on the theme of cultural and political resistance recently featured in images by Louisville photographers – Erik Branch, Xavier Burrell, Jon P. Cherry, Tyler Gerth (1992-2020), and TA Yero – Documented demonstrations of the city 2020 Black Lives Matter; and historically in the case of Terry Adkins’ sculptural column of stacked drums, referring to a march organized by the NAACP in New York City in 1917 to protest a national lynching plague.

The third section, “Memory”, is dimly lit and sparsely hung. Here, commemorative flower tributes – one sculptural by Nick Cave and one painted by Cuba-born Maria Magdalena Campos-Pons – flank a wall-filling projection of Jon-Sesrie Goff’s video “A Site of Reckoning: Battlefield”. a brief, moving meditation on the 2016 mass shooting at the Emanuel African Methodist Episcopal Church in Charleston, SC

Sherald’s portrait of Taylor, which she depicts in a turquoise dress on a turquoise background, hangs directly behind it in a chapel-like room that is otherwise empty, with the exception of a wall text in the form of a biographical timeline written by her mother. The entire show is essentially designed to guide and anchor this image. You can see it far in the distance, a noticeable color blur as soon as you enter three galleries away and approach it on a processional path.

I resist such anchoring, be it from people, art or history. I was glad that the show didn’t quite end there, but with a two-channel video by artist and filmmaker Kahlil Joseph called “BLKNWS®” in a bright room with a view of the outdoors, a flight down. Rough and nervous, the video is an exciting alternative to what the media misses out on or misrepresents in reporting the life and experience of blacks.

As part of the speed exhibition, the simulated news program reminds us of what museums leave out. As far as I know, Promise, Witness, Remembrance is the only major institutional show to date to address the important episode in our national national history that depicts Taylor’s violent death and the community’s reaction to it.

And it’s worth considering that the speed show coincides with the trial of the white Minneapolis policeman accused of killing George Floyd, another epoch-making event that – as far as I know – isn’t a major institution at first Look touched. If you’re wondering why our museums look too often like outdated artifacts with a shaky future these days, Covid-19 can’t be all the to blame.