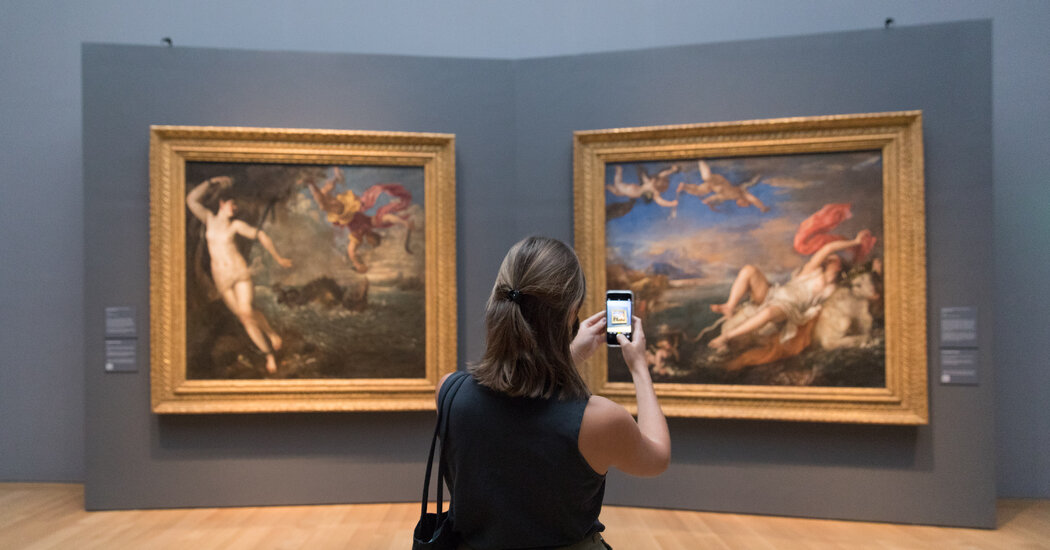 BOSTON – With its little supernova show “Titian: Women, Myth & Power”, the Isabella Stewart Gardner Museum has achieved an art-historical coup that many institutions of its size should envy, and the audience, thirsting for old masters, can be happy appreciate seeing. However, the same exhibition raises troubling questions about how aesthetics and ethics can clash in the art of the distant past from the perspective of the political present.

The exhibition first appeared in the National Gallery in London, moved on to the Museo del Prado in Madrid and makes its last and only American stop at the Gardner. The focus is on a cycle of six monumental oil paintings of mythological scenes that Titian, who died in Venice in 1576, made for the Spanish King Philip II towards the end of his career.

Originally exhibited in a single room in the Imperial Palace in Madrid, the images have gradually been dispersed. One stayed in Spain; four went to England; and in 1896 one landed in Boston, first in the salon of local art collector Isabella Stewart Gardner on Beacon Street, then in her faux palazzo on Fenway. His arrival sparked an explosion of buzz. It was widely advertised as the most expensive painting in the United States (Gardner bought it for about $ 100,000 then or about $ 3.2 million today), which for some automatically made it the largest painting ever.

It was titled “The Rape of Europe” and its theme – a young woman, a Phoenician princess, kidnapped by a god in disguise and forcibly impregnated – cannot help but put us on alert today when there are allegations and confirmed reports of sexual assault on women appear on the news almost every day. In fact, the entire cycle, with its repeated images of gender-specific power games and exposed female flesh, invites a #MeToo evaluation and raises doubts as to whether any art, no matter how “great”, can be seen as exempt from moral scrutiny.

And purely in terms of formal innovation and historical influence, this art is great. When Titian first received the commission from Philip, the ruler at the time, in 1550, he was known throughout Europe as the most expressive brush operator in the industry. Unlike his Florentine colleagues, he allows the color, line by line, a material and emotional life of its own. In it he was the Un-Michelangelo, the contemporary he considered his only real rival.

In Philip, Titian found a patron who was willing to grant him high fees and creative license. And in Titian Philip found an artist who was respected enough to polish up his own self-image as the world conqueror of an empire that controlled much of Western Europe and had staked out territories in Africa, Southeast Asia and America. And he found a painter who was both experimental and brand-conscious enough to create a distinctive, forward-looking court style.

The novelty of this style was summarized in the term Titian himself used to describe the pictures in the cycle: “poetry” – poem-like paintings in which pictures were also imaginative metaphors. In fact, the cycle itself was based on a poem “The Metamorphoses”, an episodic narrative poem by the Roman poet Ovid around 8 AD.

It is a wild and crazy book, a dystopian chronicle of the interactions between gods and humans located in a world that is in a state of moral chaos well beyond any Golden Age. There are moments of amusement and humor, but violence is a norm and rape is a form of violence that usually takes on.

It is in the first painting in the cycle, “Danae”, dated 1551-53 and on loan from the Wellington Collection in London. The picture tells the story of a young woman, Danae, who was locked in a tall tower by her father to keep her away from predatory men. But the god Jupiter, a serial killer, found a way from above. It has transformed into a heavenly shower of sparkling gold dust and falls in this form on Dana’s lying naked body.

Only one female character, the virgin goddess Diana, is portrayed as assertive and authoritative, but her actions are arbitrary and cruel. She beats the young entourage, the nymph Callisto, that she becomes pregnant and hides it. (Jupiter was the seducer again.) And in a fit of anger, she condemns the young hunter Actaeon, who stumbled upon her outdoor bathing spot, to a terrible fate: he is turned into a deer and hunted by his own dogs.

In every scene, Titian proves to be a brilliant playwright who combines past, present and future events into a single event. And he is particularly adept at showing a world that is physically and psychologically unbalanced, with figures tilting, twisting, retreating. This dynamic is particularly pronounced in “Rape of Europa”, the last and in some ways most violent painting of the group.

As Ovid reports, in a report that Titian carefully follows, Europe is at a party by the sea with friends when Jupiter appears in the form of a snow-white bull. He is so docile that Europe crowns his head with flowers and climbs on his back. Suddenly – and we see it – the bank is far away and the bull plunges into the deep water. Europe, her dress is slipping, her legs are clumsily spread and clinging to his horn to keep her balance. She looks back at her frantically waving friends, but there is no escape.

The picture is powerful. But is it “beautiful”? It’s when you get up close and personal with it, which is wonderful to do in the exhibition installed by Nathaniel Silver, the curator of the museum’s collection. Titian was one of history’s magicians. Others later – Velázquez, Rubens, Manet – worshiped him for it. If you stand only a few centimeters from the surface of the picture, you can see why: His magic hand is right there in dots, snippets, swirls that hardly merge into pictures, but do.

More and more older art, if it is to come to life for a new audience, has to be presented from these double perspectives, as formal creations of superlatives, but also as a container for difficult, often negative stories.

The Gardner is aware of this, as printed texts and audio interviews show, the works of the 16th One, “Body Language” by Barbara Kruger, hangs on the facade of the museum: a large vertical banner with enlarged details, that of “Diana and Actaeon “Was lifted off, a muscular, tanned male leg stretched out over a pale, bare female leg as if to pin it down.

The other new piece is a nine-minute black and white film entitled “The Rape of Europe” by this year’s Gardner Artists-in-Residence team led by Mary Reid Kelley and Patrick Kelley. Elaborately thought out, it presents Europe, after the kidnapping and freshly pregnant, as a limerick-spurting feminist of the 21st century who wants to assert a creative story for women in the past and present. The piece is surreally weird, just as Ovid can be, and he can also be politically sharp.

But it’s Titian who you’re really here for and the flood of images that, if you haven’t seen the shows in London or Madrid, you’ve never seen together before and almost certainly will never see again. They are challenging food for the excitement they create and for the moral doubts they cause. And they are invaluable for the lessons they teach: we can love art because of its beauty and we can call it because of its blindness. We can raise it to the sky and still wrestle it to the ground. Old or new, art is our best and our worst, and we really are, useful with all that means and beyond fashion or price.