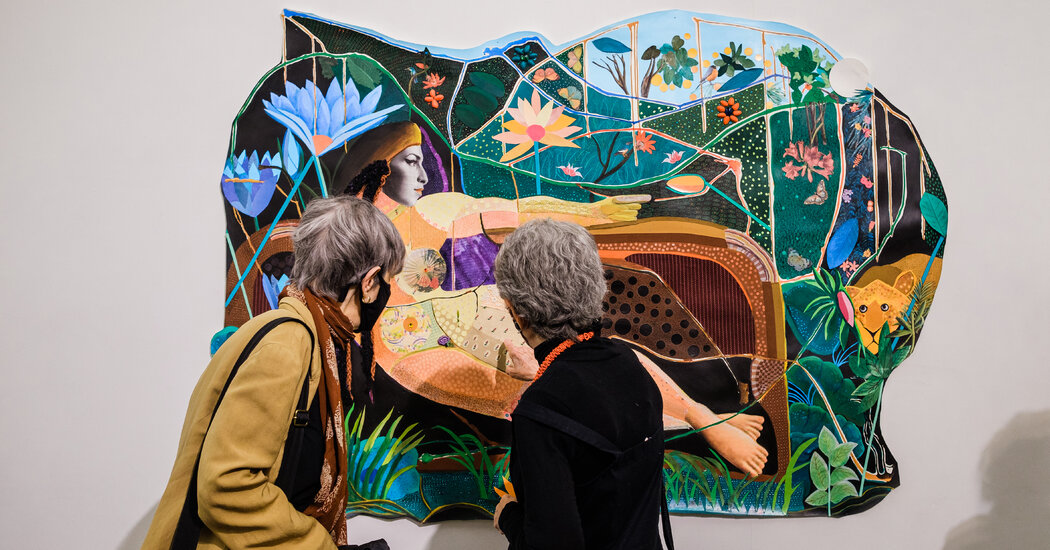 If you can’t buy tickets for Frieze im Schuppen, you can still take part in a satellite fair like “The 11 Women of the Spirit” in the Zurich gallery, which is essentially a group exhibition of female artists that is already taking place for the third time . (“Women of Spirit, Part 4” will be featured on the Armory Show in New York in September.)

The title was inspired by an 18th-century French term “femmes d’esprit”, which refers to independent artists and intellectuals who are often overlooked by mainstream art culture. (Zürcher also has a gallery in Paris.) The artists here qualify in one way or another, and that is exactly what art fairs can do: draw artists’ attention to us.

One of the lucky finds is Dee Shapiro, whose mixed-media work “My Dream” (2021) in the Museum of Modern Art clearly riffs on Henri Rousseau’s “The Dream” (1910). In Shapiro’s remake of Rousseau’s painting, she collages the face of British singer Amy Winehouse into work.

Angela Valeria’s capricious, vaguely surrealistic portraits include a “Girl With Goldfish” (2020) – the goldfish is on the young lady’s head – and a “Nurturing Male” (2020) with a white bird in his hands. Paris-born sculptor Anne de Villeméjane, who lives in New York, has created a small colony of slender cement sculptures on metal spikes depicting women. These are reminiscent of Alberto Giacometti’s large, thin bronze figures.

I was already familiar with Susan Bees’ writings and paintings – particularly through her exhibitions at the women-founded AIR Gallery, now in Brooklyn’s Dumbo. At the Zurich exhibition, Bee is showing paintings that combine various historical mythologies, with colorful animals, plants and human figures drawn in a faux-naive style and influenced by dreamy, visionary artists like Chagall.

There are ample references to famous male artists here. This, of course, reflects the fact that men have ruled most of the art worlds for millennia. Perhaps the rise of af Klint and these femmes d’esprit will encourage a shift in this axis.

11 women of the spirit, part 3, a satellite mass of the frieze