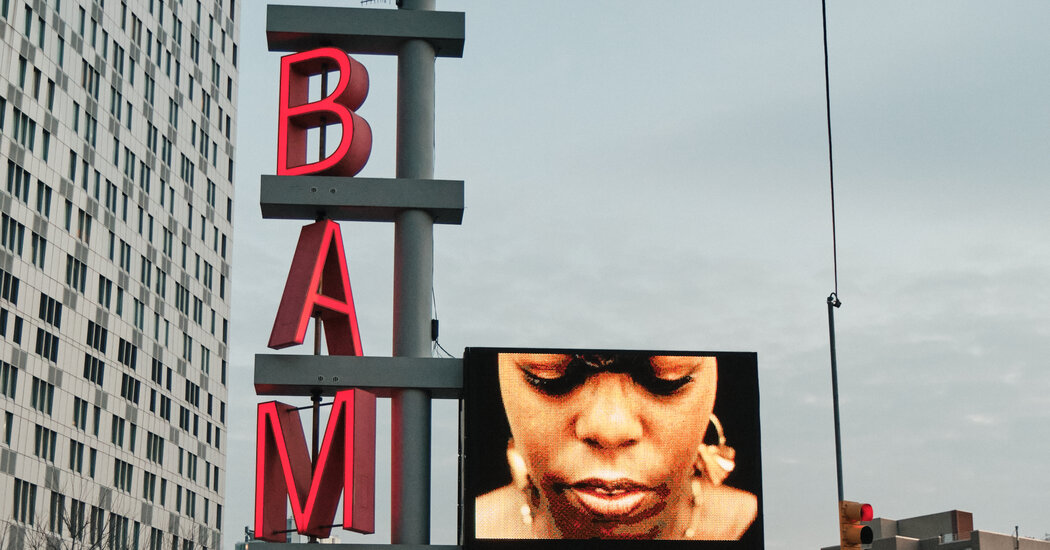 Let Freedom Ring is the title the Brooklyn Academy of Music has given its public exhibition of images by seven Brooklyn-based artists as part of their 35th annual Brooklyn tribute to Rev. Dr. Martin Luther King Jr. The images will appear on the giant BAM sign (usually used to advertise upcoming shows and events) on the corner of Lafayette Avenue and Flatbush Avenue in Brooklyn through next Friday.

The sentence “Let freedom ring” resonates deeply with me. It brings me back to that moment as a kid when I was watching TV with my own black family, immigrants from Jamaica who arrived in New York in the 1970s, and quickly and intuitively understood that we were dealing with black Americans who were then (when) had to make common cause aren’t they?) vigorously engaged in the struggle for social and economic justice. Together, my father, mother, and sister watched a civil rights program that included grainy black and white imagery of King delivering this 1963 speech at the Lincoln Memorial in Washington – the famous “I Have a Dream” speech. The chorus “Let freedom ring” grabbed me in such a way that when I look at the electronic billboard I can hear his voice again: “Let freedom ring from every hill and molehill in Mississippi. Let freedom ring from every mountain slope. “

I am grateful that BAM and the project’s curator, Larry Ossei-Mensah, did not choose the other worn-out phrase to portray King and his activist agenda: “I have a dream.” I remember my political science professor John Ehrenberg, who gave me and my classmates a detailed briefing on the civil rights movement just a few blocks from the BAM sign in the early 1990s: on the Brooklyn campus of Long Island University, where I received my bachelor’s degree. Prof. Ehrenberg has insisted that King’s rhetorical construction as a dreamer was a grave misinterpretation of his work and legacy. King was an activist, an intellectual, an organizer, a warrior of social justice. The works shown on the BAM billboard thankfully go beyond the rhetorical construction of a just society and show what freedom looks like when it underpins the lives of blacks and Latinos.

The slide show with pictures shows work by Derrick Adams, Laylah Amatullah Barrayn, Kameelah Janan Rasheed, Hank Willis Thomas, Jasmin Wahi, Alvin Armstrong and Lizania Cruz and lasts about three minutes. Here black bodies are at rest to celebrate their being, instead of being suppressed, fearful and pathetic. Barrayn shows in her “Self-Portrait (Enlargement of a Woman)” (2007) a black woman who is wrapped in warm light and framed by the gold accents of her earrings and her necklace, without meeting her gaze. It is free enough not to seek reciprocity. She is intact and at peace where she is. And in Barrayn’s “Luz + Adrian, Jogo De Capoeira” (2018), two bodies are shown upside down, standing with their heads on the ground and balancing their legs in the air in order to enjoy the freedom of their bodies towards their hands to dance .

With “We don’t die, we multiply” (2021), Armstrong takes this idea of ​​solemn movement into a painterly representation and shows two black, silhouetted bodies that meet in jubilation and joy and have their arms wide open. And Adams portrays the freedom fighter himself in “MLK’s Tropic Interlude” (2020), in which he imagines that King has the freedom to relax in lonely free time.

Cruz’s “Freedom Budget” (2021) uses text to argue for the kind of profound socio-economic restructuring that can make these moments of indulgence common or even commonplace for blacks. “Freedom Budget” alludes to the policy document drawn up by a coalition of black, socialist, and progressive leaders who originally gathered to organize March 1963 in Washington. (They called it “A Freedom Budget for All Americans.”) Their goal was to end poverty in the United States in 10 years at no cost to taxpayers. First published in 1966, it suggested harnessing strong economic growth to provide a federal guarantee for jobs, universal health care, and a basic income.

Cruz reminds us that the Freedom Budget includes: “Clean Air and Water for All”, “Healthcare for All”, “Housing for All”, “Job Guarantee for All”, “Childcare for All” and “Higher Education for All” . “Along with other movement leaders, King understood that no one can truly be free unless everyone is. In other words, blacks have had to join forces with those who are poor and abandoned by the miserable social safety net of the United States, with those who are not free from fear and hardship. As King stated in the plan’s preface:

The long road to go requires us to highlight the needs of all the poor in America, for there is no way to find jobs, decent housing, or quality-integrated schools just for Negroes.

While blacks were at the forefront of the civil rights movement, it was crucially made up of activists and organizers, workers and politicians of various races, socio-economic classes, sexualities and religious beliefs to produce the major legislative victories of the 1960s that transformed civil society. The Civil Rights Act of 1964 effectively ended segregation in public places and prohibited discrimination in the workplace. The Voting Rights Act of 1965 prohibits racial discrimination in voting. and even the Fair Housing Act of 1968 prohibits discrimination in the sale, rental, and financing of housing. Yet the struggle continues to show the deeply interconnected and interdependent structures of white supremacy. Rasheed seems to warn us against this with her piece of text “Read the Fine Print”. (2021).

But then the last picture in the slideshow is Thomas’ “Who Taught You To Love?” (2020) in festive green and red letters on a black background. It hits the right note at this moment when our public discourse becomes permeated with questions about the social and cultural mechanisms that teach us to hate, that radicalize us to the point of violent insurrection. Love can flicker like freedom between dreamy assertion and lived reality, and in order to bring us from one dry landscape to another fertile ground, we always need teachers like Martin Luther King, who not only show the way but also hold our hands in marching that direction.