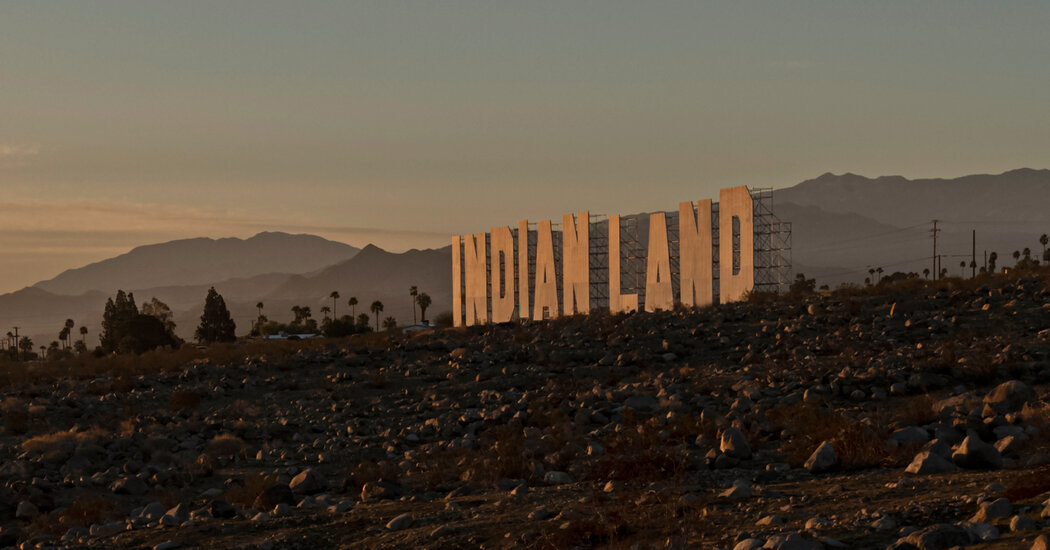 PALM SPRINGS, California – The odds against this year’s Desert X Biennale were piled high. Larger and better organized Target Exhibitions have turned their plans upside down since the pandemic, and even in its prime, Desert X, which commissions site-specific public art in and around Palm Springs, has a hard time raising money to do so to realize projects. The decision two years ago to accept funding for a spin-off by the Saudi Arabian government resulted in prominent board members resigning and artists taking the floor in protest.

And the guest curator selected for the 2021 edition, César García-Alvarez, contracted Covid-19 last year when he started working with artists to develop their projects. “I was very sick from mid-March to the end of May and still am. I’m a long-distance Covid driver, ”he said.

“It was difficult to organize a show like this during a pandemic. I think we’re all very honest,” he added. “But it was important that we continue to do this and continue to support artists.”

Neville Wakefield, Artistic Director of Desert X and co-curator of the third edition, agreed. “We never thought of canceling it,” he said of the show, which opens on Friday. “Just the opposite. The fact that we are outdoors and free to the public made our purpose more urgent in some ways. While LA museums have been closed for a year, we felt obliged to do what our walled off Institutions could not, and the need for culture to feed. “

The Biennale is smaller than usual and shows the work of 13 artists compared to 19 in previous years with a more compact footprint. “We weren’t sure hotels would be open, so we put on a show that someone from LA or San Diego could go to in one day,” said García-Alvarez. (They install hand sanitizer stations on some works of art and “health ambassadors” on others to distribute masks and ensure social distancing.)

The exhibition shows works by several international artists, including Alicja Kwade from Berlin, Serge Attukwei Clottey from Accra, Ghana; Oscar Murillo from La Paila, Colombia; Eduardo Sarabia from Guadalajara, Mexico; and Vivian Suter from Panajachel, Guatemala. Most have shown in the Mistake Room, the non-profit exhibition space that García-Alvarez founded. His original idea was to help Desert X artists work with community organizations in Palm Springs and other cities in the Coachella Valley, but Covid-19’s security protocols also largely messed up those plans.

Nevertheless, most works of art are rooted in a certain sense of place. “The desert is not an empty void,” he said. “You will see how the artists react not only to the physical landscape, but also to ecological and social problems, be it Felipe Baeza’s mural about the history of undocumented migrants and strange color communities in the desert or Serge Attukwei Clottey’s installation that deals with Questions from deals with access to water or Xaviera Simmons billboards showing how the desert maintains notions of whiteness. “

Works by Baeza, Murillo and Christopher Myers are slated to be released after the show officially opens for various reasons, while plans for a short-lived “smoke sculpture” by Judy Chicago are uncertain. (Since the Living Desert retired as a venue, it has been looking for a new location and on Friday said, “We couldn’t find one.”) Of the works of art already installed, five are worth the drive.

Galanin’s “Never Forget”, which nods against Indians more than 9/11 in the history of terrorism, transforms the standard recognition of indigenous land rights into a monumental admission of wrongdoing. Near the Palm Springs Visitor Center and the aerial tram, which has long been considered the gateway to the city, Galanin’s message is big: a 44-foot-tall sign that reads “Indian Land” in white lettering, shaped like the Hollywood sign and Hollywoodland was first spelled out in 1923. “The original Hollywoodland sign was an advertisement for a white-only property development,” said Galanin, a Tlingit and Unangax artist who lives in Sitka, Alaska. “This work is essentially the opposite: a call to landowners and others to invite them to join the landback movement.” He identified a property near the sign for sale and launched a GoFundMe campaign to try to buy it and return it to the Cahuilla people.

Stringfellow, the only Desert X artist living in the area, did an in-depth study of the history of the California homestead and the legacy of the Small Tract Act of 1938, which allowed people to live up to five acres in the Desert to acquire very cheaply by adding a small structure. Stringfellow has photographed the remains of these “Jackrabbit Homesteads” before, this time recreating or reinventing one belonging to Catherine Venn, a Los Angeles transplant who settled in the desert in the 1940s and wrote about their adventures between hers Cacti and cacti lived coyote neighbors. The tiny cubicle has no plumbing, but a few amenities: a small bed, a kitchenette, and a table with a Smith Corona typewriter that contains an unfinished poem about the “thundering silence” of the desert that made me wonder if it did Artist wrote it herself. (She didn’t; it’s from Venn.) An audio track by Stringfellow, reading from Venn’s diary, adds interestingly to confusing artist and subject. There is also a time travel suggestion, although the direction is not entirely clear. Does the artist deliver the homestead to us or the homestead to us?

This pair of yellow and orange cubes is reminiscent of a fan favorite from the last desert X: Sterling Ruby’s bright orange rectangular prism in front of the desert terrain. But that was a sleek geometric shape that seemed incongruous and improbable in the rugged landscape (much like the unknown monolith found in Utah last year that inspired a thousand conspiracy theories), while Clottey’s modest choice of materials points to the drought and water supply problems that threaten southern California and his homeland Ghana. He cuts pieces of plastic from so-called kufuor gallons, colorful containers used in Ghana to store water, and sews them together with wire. He’s previously used this material to make everything from flags to a yellow brick street. Here, the box-shaped shapes planted in grass outside a community center in Palm Springs evoke tanks of water, and the plastic blanket beneath them spreads like much-needed water.

Anyone who is out and about in Mexico for a long time is sure to come across Petates: the floor mats or sleeping mats, which are traditionally woven from dried strips of palm leaves. In this installation, 350 hand-made mats – elevated from their usual use – form the walls of a triangular, walk-in, Mazelian structure with an open roof. Sarabia’s trajectory begins with his birth in Los Angeles to Mexican immigrant parents and as an adult with his decision to move to Mexico. With that in mind, its maze will make you turn back to reach the center of the triangle – a meditative clearing where you can think about your own journey or just enjoy the view, mountains in every direction.

Suter, a Swiss-Argentine artist who lives in Guatemala on a former coffee plantation, could not fly to visit the site. Instead, she worked from photographs of local buildings, landscapes, sunsets, and more, and drew a new suite of abstract paintings based on her color palette. The paintings now hang behind the glass facade of a mid-century building in downtown Palm Springs, showing lemon, lime, and cherry colors, as well as shapes like bubbles that have a vaguely modern mid-century look. But thanks to Suter’s process, the works never feel fussy or creative – they paint on raw, unstretched canvas outside their home and let nature flow into their work in the form of stains or crumpled leaves that stick to the surface. Your dog’s muddy paw prints also look friendly.