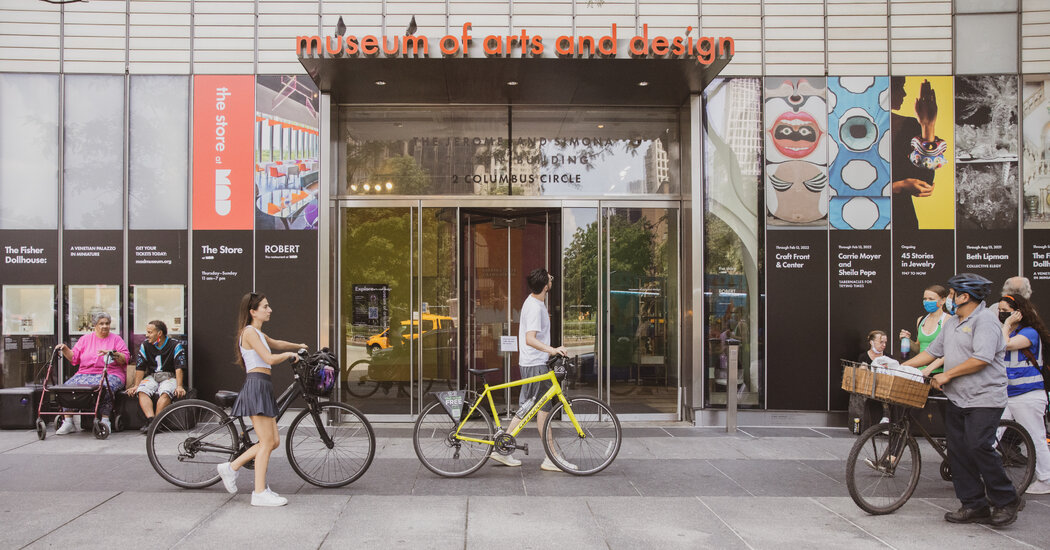 Since 2013, directors have walked through the revolving door of the Museum of Arts and Design at Columbus Circle 2 with astounding vision – and speed. One director lasted five months and suddenly resigned to pursue what he called a commitment to the “fate of humanism and democracy.” His successor lasted two years and drove the museum into an “identity crisis”, which some employees referred to as an “identity crisis”, by putting technology over design in exhibition programming. Board members intervened after employees complained about his leadership style, and he resigned.

Step inside Timothy R. Rodgers, the museum’s eleventh director in eight years (six of which are on an interim basis). Trustees say they rely on Rodgers, a veteran director who recently left the Phoenix Art Museum to run the design museum after a turbulent year of pandemic cuts and executive resignations.

“We wanted someone who could really be our future,” said Michael Dweck, treasurer of the museum, who led the search for a new director. “I understand that given the perceived churn we’ve had, there’s a lot at stake.”

Some staff said a carousel of directors bringing in new approaches has drained staff, strained relationships with some artists, and damaged trust in the board. Former directors described the institution’s problems as an expression of poor governance.

“The money stops with the people who made those appointments,” said Holly Hotchner, who ran the museum for nearly two decades, left in 2013 and now heads the National Women’s History Museum in Washington, DC. “The selected directors had very little experience in economic and financial management.”

Rodgers, who will take the helm in September, said in an interview: “The first thing I have to do is gain the trust of the employees. ”

He added, “You have to be fair and consistent. You have to be clear. ”He expressed a desire to focus on contemporary artists, create a curatorial position for indigenous arts and diversify the predominantly white board.

Founded in 1956 as the Museum of Contemporary Crafts on West 53rd Street, renamed the American Craft Museum in 1979, the institution was the country’s first museum dedicated to the craft. Hotchner expanded its mission to include art and design in 2002, signaled by a name change to Museum of Arts and Design, known as MAD. She moved the museum to Columbus Circle and adapted a building by the famous architect Edward Durell Stone, which was no longer in use in 1963. The new 54,000 square meter headquarters, which is equipped with transparent and sintered glass and a glazed terracotta tile facade, opened in 2008.

The museum has built a reputation for acclaimed exhibitions from curators such as Lowery Stokes Sims and David Revere McFadden. The collection includes more than 3,000 objects from artists such as Faith Ringgold, Wendell Castle and Derrick Adams. The gift shop and Skyline restaurant collectively bring in $ 1.8 million, more than the museum’s 2019 admission and membership fees.

But despite the awards, MAD has an unusually high turnover rate among directors, a trend that industry experts believe is a divergence in an area where executives often stay in their cultural institutions for many years.

Even during a pandemic that saw thousands of cultural workers laid off and on leave in New York City, the turnover rate for executives has remained low, according to Christine Anagnos, director of the Association of Art Museum Directors.

Turbulence at MAD shows how a series of wrong decisions can turn into a catastrophe, argue critics of the board of directors. Many say the problems began after the board of directors replaced Hotchner in 2013 with a vociferous critic of their administration, curator Glenn Adamson, who joined in with a vision of restoring the museum’s early commitment to the craft. (When that word was deleted from the museum’s name in 2002, not everyone was happy.)

Describing the transition as “needlessly thoughtless”, Hotchner said Adamson was “hired as a director with no experience” and struggled to take the institutional reins in hand. According to his own account, Adamson said in an interview, he was more focused on directing the museum’s curatorial efforts. “Apparently fundraising wasn’t one of my strengths at my job,” says Adamson, whose previous role as research director at the Victoria and Albert Museum in London wasn’t the usual managerial experience for a director.

For the past decade, MAD has consistently reported annual deficits of up to $ 2.4 million on its state disclosure forms. The board has usually covered these shortfalls and did so again during the pandemic by donating nearly $ 2 million. With around 33,000 visitors in the first six months of the year, however, the number of visitors remains low, which corresponds to a decrease in museum visitors of almost 75 percent compared to the same period in the prepandemic 2019.

Regarding the tax challenges, Adamson, who resigned in March 2016, said the institution’s Columbus Circle location is expensive to operate, even with the board partially assuming the losses. “It is more difficult to raise the cost of equipment than a program budget,” he added. “There is a correct sizing that the next head of the institution has yet to make.”

Adamson’s resignation sparked another executive search that ended in September with the appointment of Jorge Daniel Veneciano, a former director of El Museo del Barrio in East Harlem. But he only lasted five months and left a cloud of allegations from the staff that he was off the mission.

“It was the wrong cultural fit,” Veneciano said in an interview earlier this month, explaining that he joined the museum with a vision to explore issues of social justice through the globalization of art and design. “But in the end the love between me and the board was not enough to strengthen our partnership.”

When Veneciano left, several managers requested to be involved in the board’s next search for directors, but said they were denied it. Christopher Scoates joined MAD in 2018 from the Cranbrook Academy of Art and Art Museum near Detroit, pledging to take the design museum into the 21st century and “challenge the way we think about the future.”

However, staff said Scoates was too forward-thinking and urged the curatorial department to focus on exhibitions dedicated to engineering rather than craft. Staff complained to the board that it was disruptive, often exceeded protocols, and over-promised artists. He resigned in August 2020.

“Chris made a hiring decision and pulled out contracts for my department without even consulting me,” said Shannon Stratton, the museum’s chief curator, who stepped down in 2019 because of a disagreement with his management style.

During his tenure, Emma Sulkowicz, an artist on the museum’s residency program, complained to an official that she was feeling unsafe working in a studio on the premises, informally called a “zoo” by staff, because it was open to visitors was accessible.

In a letter of resignation to the New York Times, Sulkowicz expressed frustration that a security guard watched a museum visitor repeatedly stalk her in what she called “harassment.” She said Scoates met with her and promised that a guard would be posted outside the studio, but the visitor was coming back and the harassment continued.

“I’m not going to sit in this torture chamber,” wrote Sulkowicz in her November 2018 resignation letter to the museum’s education manager, Cathleen Lewis. Sulkowicz said she never received a reply to her letter. Wendi Parson, a museum spokeswoman, said last week the museum had been working to take “appropriate measures” to protect the artist’s “personal safety”.

During Scoates’ tenure, other issues were raised at the museum and he resigned following a request from the board of directors to the director’s management. “It didn’t go well together and there was a mutual decision for him to find another position,” said Michele Cohen, chairman of the board.

Scoates declined to comment. His departure rocked the institution and forced the board to reconsider its relationship with its employees, according to Cohen, who served as interim director. “We have become better listeners,” she says.

For the next executive search, the trustees agreed to involve a staff member representing the interests of the staff and an outside museum director, James S. Snyder, the Jerusalem Foundation’s chairman. The museum said Rodgers fit his new criteria: a proven manager with at least a decade of experience and knowledge of the craft world.

Rodgers, who only spent a year at the Phoenix Art Museum before taking the job, wasn’t asked to commit to any number of years at MAD, but Dweck, who led the search, said they have an “understanding.” . “He certainly doesn’t want to hop around at this stage in his career,” said Dweck, adding that he and the museum “look forward to a long, successful tenure.”

But executive brain drain “could have a negative impact on an institution’s reputation,” said Gregory Stevens, director of the Department of Museum Ethics at Seton Hall University. “If you google the museum, it’s all the articles about the directors coming and going,” he said, adding that the perception of a crisis could be a serious drag on the museum’s ability to raise funds or attract new visitors. “Either there is something wrong with the board of directors’ decision-making, or they are not transparent to their candidate,” he said. “It doesn’t show that the organization is sticking together.”

Rodgers said he understands the challenges of his appointment and is already working on plans to make the museum more financially stable. “The museum has sources of income that others would die for,” Rodgers said, citing his gift shop and restaurant. “The location has its value. I think it has all the right ingredients. “