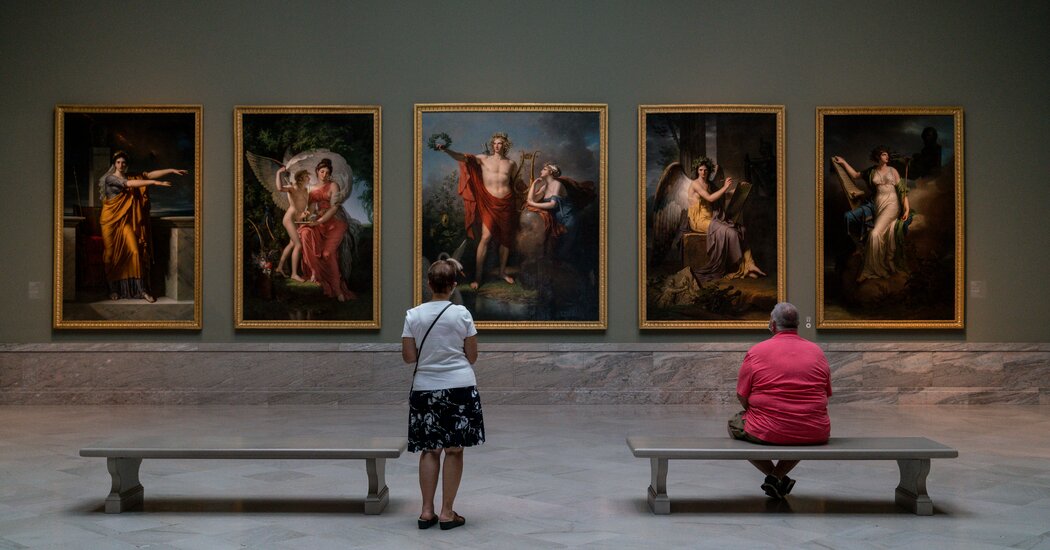 There are many flavors of obnoxious New Yorkers out there. My own: the well-traveled provincial. Before the pandemic, I counted alarming carbon emissions while searching for art, didn’t think about flying to East Asia or South Africa for a single exhibition or performance – and then neglected institutions just a time zone or two away. When the lockdown came and the power of my passport dwindled, I made the embarrassing calculation that I had traveled four times as many foreign countries as US states.

Go west, young man Manhattan! My post-pandemic resolution (“Post” pandemic: that was wishful thinking) was to visit the extraordinary museums in my native country – especially the great institutions of the Midwest that were founded at the beginning of the last century and in which all of the World cultures converge. Equipped with a couple of KN95 masks and a small car made in Japan, this delinquent was finally suitable for a road trip from Cleveland to Detroit – on the way to four museums that are connected by a three-hour curve around Lake Erie. Together they make a lovely Labor Day weekend getaway (though all four are closed on Mondays as usual), but each contains the treasures of an entire world.

For nearly a decade, I’ve wanted to go to Ohio to see the expansion and renovation project that has confirmed this museum as one of the most important art institutions in the country. What eventually got me to defy LaGuardia was a smart, surprising exhibit on French painting at the turn of the century. “Private Lives: Home and Family in the Art of the Nabis” takes us into the salons, bedrooms and winter gardens of Pierre Bonnard, Maurice Denis, Félix Vallotton and the real star of the show, Édouard Vuillard: four Parisians, the domestic scenes the psychological gave intensity of the crime thriller. Above all, Vuillard’s dense and overloaded pattern – a bedspread strewn with hundreds of brightly colored spots, a dress hatched like the bars of a prison – invite a reassessment of what an artist can do if he stays inside: a good lesson for the plague year 2020, however, one that I had hoped would no longer be needed in the vaccinated 2021.

For a museum of its size and importance, Cleveland offers a wealth of intimate encounters. In the dimly lit medieval galleries I could not detach myself from four alabaster statuettes of mourning monks, which Claus de Werve hooded at the beginning of the 15th. Another naturalistic monk, just as breathtaking: a statue made of Hinoki cypress from the Kamakura era in Japan depicting a Zen master with narrowed eyes and pursed lips, the image of enlightenment. It is located in the barren west wing, which was designed by Rafael Viñoly and opened in 2013.

And the museum houses one of the rarest works of art in the United States: the Apollo Sauroctonos or the “Cleveland Apollo”, a sleek bronze god that the museum attributes to the Greek sculptor Praxiteles. (Greek bronzes of this size are exceptionally rare as most were melted down.) Known for years from later marble copies, the bronze Apollo arrived in Cleveland in 2003; its attribution will be debated for generations, and its provenance is more than a little gloomy. Rilke once looked at an Apollo statue in the Louvre and came to the conclusion, “You have to change your life.” My own Apollonian experience was less thunderous – but 10 minutes or more alone with him in the museum’s old art galleries that were finally down Staring at his face and the whip saw curve of his right hip had their own poetry.

Stanford or Smith, Williams or Northwestern: so many of the most fulfilling museums in this country are in universities and so many have suspended the pandemic. Academic museums are closed longer than almost any other art institution, largely due to the university’s restrictions on bringing outsiders onto campus.

Oberlin’s Museum, less than an hour from Cleveland, was closed to the public for 15 months – but as of this summer, outsiders like myself have been able to re-enter one of the country’s most important educational museums. The painting collection includes an important baroque tableau of the dying, arrow-pierced Saint Sebastian by the baroque painter Hendrick ter Brugghen; the modern collection is rich in Monet and Mitchell, as well as Oberlin graduates such as the sculptor John Newman. The architecture is a special highlight of the collection: a mixed Renaissance fantasy by Beaux Arts architect Cass Gilbert (who designed numerous buildings in Oberlin), combined with a chessboard extension by Robert Venturi.

The most extraordinary object to be seen is one of the smallest: a newly acquired portrait medallion, painted in 1635, of an Ethiopian traveler at the court of Savoy. The sitter is a contender for the Ethiopian throne named Zaga Christ, and the artist Giovanna Garzoni has picked out the curls of his hair and the details of his lace frizz in a miniature just five centimeters high. On the back, too, the medallion bears witness to the Euro-African exchange: she signed her name in both Italian and Amharic.

Ninety minutes west of Oberlin is a long-loved museum in Buckeye State, the collection of which I have admired in books, on loan and on websites, but whose riches must be seen to be believed. The Toledo Museum reflects the city’s glory days as the glassmaking capital, and in and around the Grand Gallery is an anthology of European art history that seems to have only high notes. There are the beefy nudes of Luca Signorelli, one of the most meticulous anatomists of the Renaissance. The fresh beauty of Vigée Le Brun’s portrait of a countess of the old regime, its nonchalance points to the coming revolution. Manet’s captivating late portrait (from 1880) of the writer and politician Antonin Proust, holding a yellow leather glove depicted as just a few bold strokes of goldenrod.

New art is not neglected; In October, the museum will host the North American premiere of “Doppelganger” by Canadian video artist Stan Douglas, an outstanding contribution to the 2019 Venice Biennale. The museum’s greatest contemporary attraction, however, is the architecture: its glass pavilion, designed by Japanese architects Sanaa low vantage point, which has housed one of the world’s largest glass collections (as well as a glassworks) since 2006. Its transparent curved walls, its calm dissolution of inside and outside make it a museum building worthy of a pilgrimage.

Since I turned to the arts professionally, the most shameful void in my American museum career has been here in Motor City. I spent half of my time here kicking myself because I’d delayed my first discovery of Bellini’s “Madonna and Child,” in which Mary and her son stand in front of a shiny green curtain, or Matisse’s pared-down 1916 interior that was the first to invade an American museum.

An imposing nkisi n’kondi from Congo, with hips stretched forward, his body covered with nails, master of an impressive African collection that integrates performance and masquerade to show the expressive cultures of the continent across all media. A recent, more surprising African acquisition: a mask by an artist of the Chewa people of Malawi, whose straight jaws and painted sideburns confirm that he is none other than Elvis Presley.

“Detroit Style: Car Design in the Motor City, 1950–2020”, the first automobile design exhibition the museum has held since 1985 and which includes a dozen cars for both the street and experimental, is now parked in the DIA Showcase are intended. The strangest, and by far the coolest, is the 1987 Lamborghini Portofino, a scissor-door sedan that tried to bridge the racetrack and suburban school run. It only exists in this single prototype, and I’m dying to bring it to museums farther away.

As for Diego Rivera’s murals of Detroit industry, which I had seen only as reproductions in the Whitney Museum of American Art’s recent “Vida Americana,” her marriage of the Ford assembly line to Aztec cosmology has the splendor of a cathedral. I looked up to a corner of the Rivera Courtyard at a scene that was controversial at the time: a doctor, a nurse, and an infant in a laboratory whose poses reflected scenes from the Holy Family. A horse, a cow and a few rams graze in front of the pistons and coolers. The boy has a golden crown of hair that looks like a halo and he is participating in a breakthrough in the human industry whose promises have not let up. The Christ Child is vaccinated.