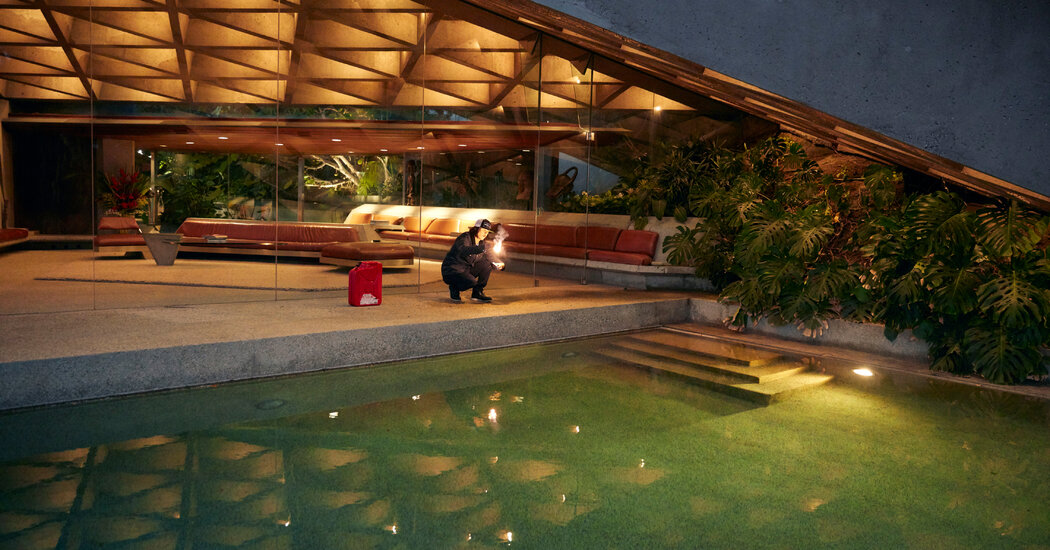 As I pored over a new monograph of Catherine Opie’s diverse photographs that was published during Gay Pride month, I, as a gay man, wondered if anything between her famous pictures of lesbians in the Bay Area and her pictures of highways in Los Angeles was in Connection. Ice fishing houses in Minnesota, high school soccer games in Texas, and Elizabeth Taylor’s closets in Bel Air.

Is there such a thing as a gay or queer sensitivity? And if so, is it the lavender-colored thread that runs through an entire body of “normal” work by Opie, a lesbian who recently held the Art Department at the University of California at Los Angeles?

Being queer means breaking away from the traditional norms of heterosexuality. Even at a young age, a person whose libidinal instincts are out of sync with what is naturally given read the world as a foreign-language text that has to be deciphered. The process of recognizing and assuming a more authentic identity does not erase the feeling of alienation, although this deliberate creation of a true self is also at the heart of a queer sensibility that is tied to the remaining longing to adapt by pretending to be what one is not.

Of course, this incongruity between who you are and what you expect or have to be is not exclusively the property of gays. At the beginning of the 20th century, August Sander portrayed Germans from all walks of life who tried to live within the constraints of their social roles. Building on the groundbreaking images of the lesbian Claude Cahun and the bisexual Diane Arbus, Gillian Wearing is now concerned with self-expression through the wearing of masks. But admitting that these are universal human issues does not deny that a queer person – and a queer artist in particular – usually perceives them more pervasively and with greater immediacy and urgency.

In the early 1990s, Opie made a name for herself with a series of portraits of Bay Area lesbians engaged in sadomasochistic practices, a community she belonged to. The most discussed photos were her self-portraits: Opie with a leather hood and stripped down to the waist, with metal pins on her arms and the word “perverse”, adorned with a leaved snail that was cut bloody over her breasts; Opie breastfeeds her son with the decade-old “perverted” scar that is still visible; and most poignantly, the earliest in the group – Opie’s bare back, carved with a childlike line drawing of two women holding hands in front of a house and a cloud that partially obscures the sun.

These self-portraits are carefully composed and place Opie in front of opulent, deeply colored fabric backgrounds with foliage patterns that harmonize with the designs of their cutouts. “I knew that at this point I had to use aesthetics to talk about my community, that there had to be another way to enter it beyond a documentary style,” she said in an interview in the monograph. “I was still documenting, but there is a formality.”

Each of the portraits addresses an element of what it means to be queer. “Self Portrait / Pervert” (1994) is a loud statement that Opie will not conform to the rules of propriety of the prevailing society. But “Self Portrait / Cutting” (1993), which she realized a year earlier after a failed relationship, testifies to her longing for the conventional dream of a loving partnership. These conflicts are resolved in “Self Portrait / Nursing” (2004), which shows Opie – who has since found another partner and a new home – and is breastfeeding her young son. The persistence of the scar, a visible sign of sexual otherness, indicates that she has achieved her goal without pretending to be someone she is not.

The self-portraits deal directly with the formation of a queer identity. Portraits that made Opie’s reputation in the 90s, from their lesbian and transgender friends and from lesbian households in the United States do so too. But a large part of her work is dedicated to street landscapes, landscapes and still lifes. Produced with different camera formats and printing processes, they share what they lack: the presence of people.

Early weekend mornings in the 1990s, Opie photographed trafficless Los Angeles freeways and Los Angeles mini-malls that weren’t yet open to shoppers. She photographed facades and doors in the privileged boroughs of Beverly Hills and Bel Air, where people walk from their cars to their homes and rarely appear in public. Venturing out of her home turf, she portrayed ice houses built for fishermen on frozen lakes in northern Minnesota, crossings in Minneapolis, and pedestrian perspectives on St. Louis, Chicago, and New York’s Wall Street.

When she photographed people in the countryside, they were usually tiny: surfers paddling in hopes of a wave, high school football players competing on grass fields. They remind me of the pictures Harry Callahan took in the 1950s of his wife Eleanor with their daughter Barbara, who stood small and isolated in Lincoln Park in Chicago. But Eleanor and Barbara were part of Callahan’s nuclear family. The groups Opie photographs have formed a community through shared affinities, just as her S&M friends in the Bay Area did.

The formation of a heterosexual family is encouraged and expected in such a way that the process can apparently take place without conscious intervention. It’s like sliding down a rushing river. But the communities and partnerships that queer people forge require that we consciously and skillfully steer our boats against the prevailing tide. Because of this, I think Opie is drawn to the architecture of conduits, the systems through which people connect and the architecture that prevents people from connecting.

It documents wealthy houses in Los Angeles that give the street an exaggeratedly uncommunicative face. Her portrait of the Dickason family as part of her master’s thesis on a planned suburban community shows that heterosexual family life in private homes can be just as performative as sadomasochistic rituals.

At a higher level on the social ladder, Opie recalled Elizabeth Taylor’s home in Bel Air in 2011. Without ever photographing the actress who died in the middle of the project, Opie captured Taylor by depicting her chosen regalia of clothing and décor . The images of Taylor’s wardrobes with clothes carefully sorted by color and fabric are surprisingly intimate. The new monograph contrasts an earlier photo by Opie titled “All My Sex Toys” with the jeweled scarlet bow needles worn by Taylor, an early advocate for people with AIDS. In both cases, Opie lifted her subjects out of the closet.

She is attuned to the interactions between people and is fascinated by the formal beauty of the concrete highways that lead Angelenos to and from their homes. She photographed the highways with a panorama camera and made old-fashioned platinum prints – to evoke the elegiac monumentality of photographers of 19th century Egyptian ruins like Maxime Du Camp. Your Minneapolis walkways aren’t as breathtakingly beautiful, and the mini-malls even less so, but like the instruction manuals, they illustrate all the ways people could get together.

It is revealing that when Opie includes people or their peculiar structures – the ice houses, surfers, soccer players – they unite in inhospitable environments. They hold out their hand as they push back.

In her first film “The Modernist” (2016) she dealt with the cult of mid-century modernist houses in Los Angeles. The film’s protagonist of the same name is played by long-time friend and collaborator Stosh Fila, a trans man named Pig Pen. The modernist builds models of iconic houses and then lights the real ones. Mid-century modernism was an architectural movement born out of utopian optimism. Structures emerged that are now trophy homes for the ultra-rich. Although the buildings have glass surfaces, thanks to their location they are mostly as private as the locked houses that Opie photographed in Beverly Hills. The owners can look out over the city without anyone looking inside. The residences are transparent citadels.

The modernist loves these houses obsessively and is consumed and tormented by this desire until he feels compelled to destroy them. When I first saw the film, I kept thinking of the famous phrase from Oscar Wilde’s “The Ballad of Reading Gaol”: “And all men kill the thing they love.” In its conflicts, its irony and its longing it’s a very strange feeling.

Greater rates of interest can be good for the nation, Treasury Secretary Yellen says