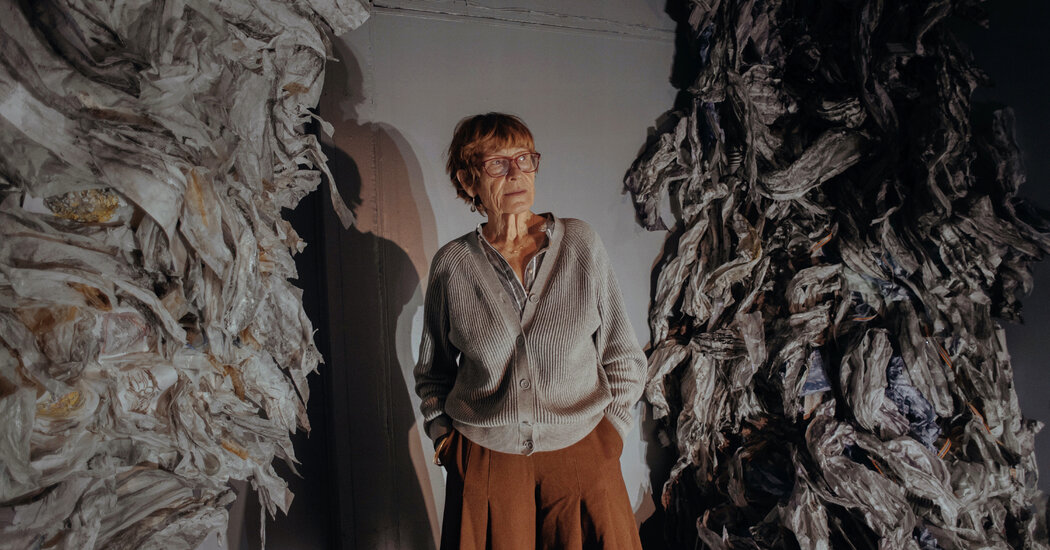 About four years ago, I followed an email invitation to an art gallery in Crown Heights, Brooklyn, and wasn’t exactly expecting to find curious, provocative, contemporary work in that neighborhood, but I did. Now I return regularly to find this art over and over again in the FiveMyles gallery.

I might not have known Heather Holden, Shervone Neckles, Deborah Singletary, Adama Delphine Fawundu, Francks Deceus, and Roya Amigh any other way. I received this call at a time when I was just starting out on the Hyperallergic workforce, learning the contours of the New York art scene. I was drawn to FiveMyles – the oldest ongoing gallery in Crown Heights – by pictures at an exhibition of Amigh’s drawings, “I Wander Back Asleep” in 2017. I saw combinations of glued lace leaves, dried flowers, cardboard, and translucent hand-made paper, interspersed with bits of thread, glued to these substrates to form words and human figures. It was a revelation to see these materials that could make up a teenager’s souvenir journal, in intuitive combinations that told fragmentary and intimate stories, but also recalled the story of the artist’s Persian ancestors. It is no accident that this type of work is shown here.

The gallery owner Hanne Tierney is herself a puppeteer and performer and makes works that convey narratives through a combination of installation, lighting, music and their choreographed movement of anthropomorphized costumes and objects – what Tierney calls “theater without actors”. It’s also no coincidence that most of the shows I’ve seen at FiveMyles consist of the work of middle-aged women and women in color. As Tierney tells me, “There’s so much soul and heart in women’s shows in a different way.”

When I ask her to elaborate on why she’s showing the artists she’s doing, she says, “You know, the people who go to Chelsea don’t know that there’s another identity that makes art, not like that Like we’ve done for thousands of years. Since a lot of black artists show work at FiveMyles, I try to get these other people to see the work they don’t have access to, work done from a different identity, a different sense of being. of a different sense of importance. “

Tierney’s own identity has changed. Born in East Germany, she came to the USA in 1959 at the age of 19 and was hired as an au pair. She hoped to reinvent herself from a region that was still marked by war. She became an artist and finally a gallery owner; However, she describes herself as a failed writer at first: “I realized that I wasn’t really good enough like George Eliot, and it made me like three-dimensional writing, and that eventually got me into puppetry.”

Tierney first came to the space that would become FiveMyles in 1999 after her mentor and friend, sculptor Herbert Ferber, bought it to keep his work. Tierney used the vacant space to do her own work, and also thought that her son Myles Tierney, who was then a television producer for The Associated Press and based in Nairobi, could use the space as an editing suite. Her son, the fifth in a line of men in their family named Myles, was shot dead in January 1999 in Freetown, Sierra Leone. After that, Tierney named the room FiveMyles and began using it to perform.

As early as the next year, Marian Griffiths, a close friend of Tierney and former director of the Sculpture Center, asked Tierney if she could curate a show at FiveMyles. So the artist turned into a gallery owner who wanted to show middle-aged women and black artists who were often ignored by the more upscale galleries and dealers who run their business a few miles west.

I remember watching Shervone Neckles’ show “Provenance” in 2019 and then thinking that her use of the figure of the silhouetted body of a black woman with a house on her shoulders instead of her head was a profound possibility to speak of legacy and inheritance as both burden and blessing. (That same year Neckles was selected to represent Grenada at the Venice Biennale.) In 2020, for the show “Between Waters”, I saw Heather Holden’s wonderfully cinematic paintings depicting catastrophic events marked by popular culture (such as Michael Jacksons) connect white glove). These women deserve champions to bring them to a wider audience. Hanne Tierney is her lawyer.

One could take trains # 2, 3, 4, or 5 to the Franklin Avenue-Medgar Evers College stop and walk a few blocks to St. John’s Place. The gallery is located between two major commercial routes, Classon Avenue and Franklin Avenue, and is a haven between them. Stepping into FiveMyles is a bit like stepping into a cave. All outside noise is switched off. The interior, painted in a deep, medium gray, gives the room the feeling of being a little outside the sphere of influence of time.

Though Tierney has had a home in SoHo for 50 years, she maintains the arts scene in Crown Heights. The local community has changed significantly in recent years. According to The Observer, northern Crown Heights and Prospect Lefferts Gardens saw white residents rise 205 percent and black populations 23 percent between 2000 and 2015. At the same time, the number of companies in Crown Heights rose from around 1,000 to 1,970.

Tierney mourns this change and hopes her gallery can serve as both an anchor and a beacon for the neighborhood. “It was a very established community where people got married, had children, and whenever someone died, FiveMyles held a memorial service,” she said. “It was a community that had established itself. Young people in Manhattan want to live cheap and move in. The landlords see that a little more money needs to be made because they are financially more profitable. So that really ruined this church. FiveMyles is like a little rescue station. “

The $ 160,000 annual budget comes primarily from a mix of grants made by several funding agencies, including the New York State Council for the Arts and the Andy Warhol Foundation. According to Tierney, a large part of it goes to artists and salaries for his little four employees (including himself) and for installations like the current “Four Artists: Two Painters, Two Sculptors”. This show also represents the endeavors of FiveMyles: It connects Kathleen Maximin, a mostly self-taught black painter from St. Lucia, with Michael Filan, an older white artist who was trained at the Pratt Institute and both meet their serious exploration of expressive potential of abstraction. The exhibition contrasts this painterly exuberance with soft pieces of stoneware, which Gerard McCarthy prefers to human figures, and Gunnar Theel’s painted steel, which resemble residential buildings. All in all, they give us a picture of a community that Tierney would like to maintain: colorful, unexpected, heterogeneous.

Other art galleries have moved to the area in an effort to attract new arrivals: the Welancora Gallery, which opened in 2002 and which Tierney has worked with a number of times; Medium Tings, a roving exhibition space; and Jenkins Johnson Projects, which branched from its San Francisco roots to a Brooklyn outpost in 2017.

There are still few art venues in the city that support artists and curators, act as a place of discovery and revelation and at the same time are supposed to be a focal point for civic culture. FiveMyles embraces all of these ambitions and helps us understand how important art galleries can be to our lives.