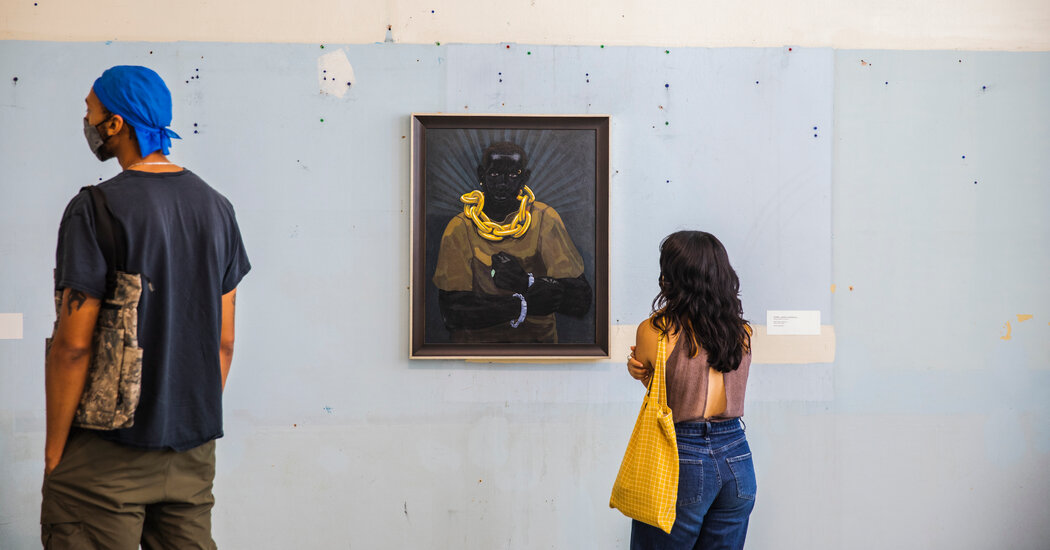 KINDERHOOK, NY – Feedback is what you get when the output of a system is looped through its input, like when Jimi Hendrix used an electric guitar with an overdriven amplifier to complete a performance of “The Star-Spangled Banner “into a dizzying tone poem of fear and destruction.

Although the gesture was received at the time as a protest – against the Vietnam War, against racial inequality, against everything wrong with America – Hendrix, himself a veterinarian for the US Army, withheld his intentions. It would probably be more correct to borrow contemporary art jargon and name what he did with the national anthem than to “complicate” it. Of course, this also included protest. But it was the tension between his protest and the song’s usual bombast that he also captured that really summed up his historic moment and made the rendering iconic.

If we want to make museums truly representative – and, in a broader sense, to make progress as a divided and unequal society – we need to learn to complicate the exhibits and the way we talk about them.

Helen Molesworth, the former chief curator of the Museum of Contemporary Art in Los Angeles, manages this brilliantly in “Feedback”, an exhibition with 21 artists that she organized for The School, the outpost of the Jack Shainman Gallery. Most of the papers deal with race, gender, or color of skin in some way, though not all. But Molesworth organizes the pieces less by content than by visual rhythm and contrast, creating deeply evocative overtones that subtly connect the works and highlight their nuances while ensuring that nothing is reduced to a political message.

It took its inspiration and the title of the show from a play by Janet Cardiff and George Bures Miller, a large Marshall amplifier near the entrance to the building. (The school is a 30,000-square-foot former high school and has a number of galleries on three levels, all of which are used for this show.) When you step on the amplifier’s attached wah-wah pedal, it plays a replica of the Guitarist Frank Jauernick Hendrix version loud enough to shake your sternum. But you can’t step back because there is only so much string and as soon as you lift your foot the music stops.

This piece is flanked by “Flight Path”, one of several extraordinary ceramic sculptures by Rose B. Simpson, who lives and works on the Santa Clara Pueblo in New Mexico. A dark, two and a half meter tall figure with an elongated upper body and neck, long leather straps for the arms and light gray painted feet with clay slips, she looks up at the ceiling with empty eye sockets. Between the figure and the amplifier is an untitled wall piece by Steve Locke, an artist who lives in New York and teaches at Pratt: blue neon with the inscription “I Remember Everything You Taught Me Here”.

Amplifier, figure and neon merge together to form an independent threefold work of art, a biting meditation on history, memory and defiance. John Buck’s Talk of the Town (The), a bare wooden figure with a complex of American buildings and statues in place of a head, adds an ornament to the room.

Locke opens the conversation around the corner by placing the shape of a slave auction block at the center of concentric, square color studies à la Josef Albers, in a series of small acrylic paintings that he calls his “homage to the auction block”. Thinking about “color” without reference to race is a luxury that not everyone in our society gets. But you don’t have to throw away Albers or his “Homage to the Square” for it. We can keep everything – and in fact, modernity will only look sharper if, like Locke, we deal honestly with its shadows.

Hilary Pecis and Becky Suss, young artists who work in Los Angeles and Philadelphia, respectively, paint well-ordered interiors with lots of books and without people. Their images are similar enough to cause a moment of confusion when put together. But while Pecis’ work is lush and expressive, Suss’s is drier and primitive, and the differences, when encountered one by one, are enough to build up a ravishing visual dissonance. You see how much the context changes the effect of a painting and can even change what might otherwise seem like definitive statements. Both painters look better in each other’s company.

When Suss ‘painting “Behind the AZ (Set vs. Isis / Nefertiti)” meets Sanford Biggers’ “God Whistle”, something else happens. Biggers’ sculpture, a marble figure in the Renaissance style with a head like an African mask, is in itself a commentary on the European appropriation of African art at the beginning of the 20th century and the eradication of black faces and culture. But the old figures on Suss’ canvas made me think of American Afrocentrists who also appropriate ancient Egyptian history.

One thing that makes our public discussions about race and identity frustrating is how quickly everyone is reduced to a single term. Similarly, efforts to diversify museums fail by making superficial additions without actually taking into account their existing collections. But with such juxtapositions, Molesworth offers a more robust example of inclusion that highlights diversity, both individual and group. Biggers is a black artist commenting on European art history, but he is also, like the white cutie, an American who takes up global art history for his own contemporary aesthetic purposes. The painting by Süß, which is a small classical sculpture together with an Egyptian god and an Egyptian queen, was actually inspired by a children’s book. But the pictures, wherever she got them, inevitably have greater resonance.

Not all works in “Feedback” are equally strong, although they are all carried away by the flow of Molesworth’s overall idea. But Karon Davis’ paper-white sculptures of black girls with jumping ropes, made with plaster cast over steel fittings, deserve a mention, as do Dana Sherwood’s strange feminist fantasies, drawings, and paintings of naked women mixed with idyllic living room sets in the bellies of giant animals. Christina Forrer reliably contributes great tapestries and drawings, whose dreamy figurative images come from an anthology by the Grimm Brothers, and Cauleen Smith, who lives and works in Los Angeles, comes with eye-catching neon wall pieces and two quietly brilliant videos.

In an “orange jumpsuit,” Smith carefully arranges a bouquet of orange flowers while wearing blue jumpsuit. Then she leaves the bouquet on the sidewalk in front of the Los Angeles County Men’s Jail. Blue and orange are complementary colors, and I wondered how their costume relates to the orange bouquet and the orange overalls used by the men in prison.

As I wandered through the show, I struggled to articulate their animating insight. Something about race, America and life at odds. In the last room I came across Kerry James Marshall’s “Ecce Homo” (2008-2014), which shows a young black man in a serious pose. He wears a diamond earring, a dollar bill ring, and a huge gold chain around his neck. The title – “See the man,” the words of Pontius Pilate in Latin Vulgate when he showed Jesus to the angry crowd – recalls the oldest and best-known story in Western culture of a man who turned persecution into glory. Marshall also continues a well-traveled theme of Medieval and Renaissance art history, bringing both the Christ story and art history to life for the position of Black Americans. The key to this is the chain, an annoying shackle that is converted into an ornament and then made even heavier by casting gold.