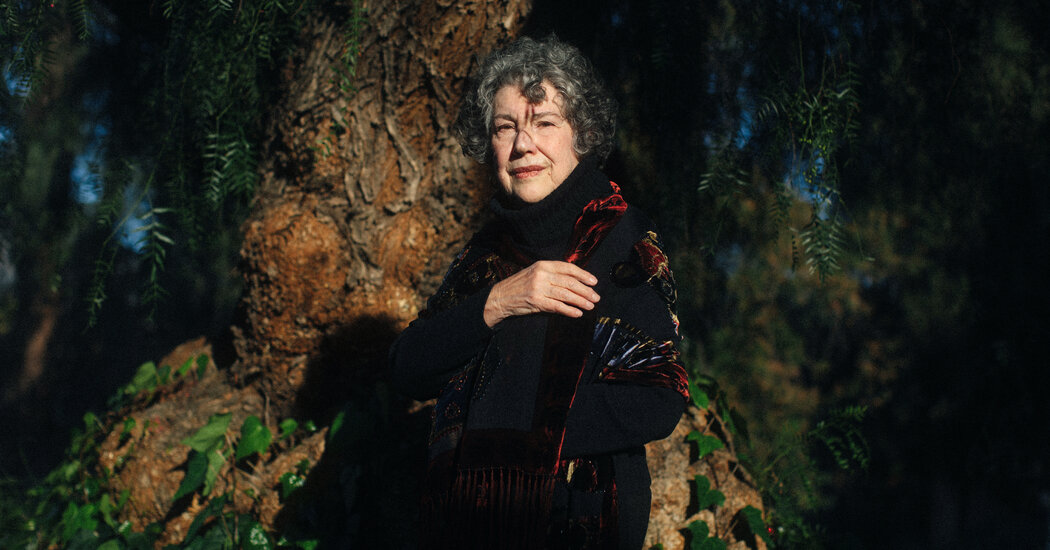 On the edge of a huge park in Tehran, there is a neo-brutalist structure in the color of sand. Inside is one of the best collections of modern Western art in the world.

You enter the Tehran Museum of Contemporary Art through an atrium that winds down like an inverted version of Frank Lloyd Wright’s Guggenheim Museum. Photos of Ayatollah Ruhollah Khomeini, the father of the Iranian Revolution of 1979, and Ayatollah Ali Khamenei, who succeeded him as supreme leader of the Islamic Republic, look down on you.

A number of underground galleries await you. There’s nothing like the feeling of meeting face-to-face for the first time with his most sensational masterpiece: Jackson Pollock’s “Wall Painting on Indian Red Ground” from 1950, a 6 by 8 foot canvas created with rust and shades of red layered eddies of thick, dripping paint are considered to be one of his finest works from his most important period.

The museum was designed by Empress Farah Diba Pahlavi, wife of Shah Mohammed Reza Pahlavi, and was internationally recognized in 1977. Just 15 months later, the couple left the country in the face of a massive popular uprising in what was officially called a vacation. “The revolution replaced the monarchy with an Islamic republic weeks later. The new regime could have sold or destroyed the masterpieces of Western art. Instead, the museum was closed, its treasures hidden in a concrete cellar, and the Shah’s palaces were preserved and eventually turned into museums. The art collection, which was bought for less than $ 100 million, was protected but invisible for years. According to some estimates, it is it’s now worth up to $ 3 billion.

Now Donna Stein, an American curator who lived in Tehran between 1975 and 1977 and played a small but important role in the compilation of the collection, has written a treatise: “The Empress and I: How an Old Empire Collected Modern Art, declined and rediscovered. ”

It tells two interlocking stories: a rules-driven, hierarchical, often dysfunctional bureaucracy that bought Western art at surprisingly reasonable prices for a monarchy that was flushed with oil money; another part of the daily life of an unmarried young American woman in the old Tehran regime.

This is a score accounting work. Stein, 78, the retired assistant director of the Wende Museum in Los Angeles, makes it clear that she feels deprived of the merit she deserves.

“Since I was a foreigner who mostly worked in secret, my leadership in the formation of the National Collection was never fully recognized,” she wrote in the preface. Her male superiors, she added, “have bravely taken credit for my aesthetic choices.” So, “I finally wrote ‘The Empress and I’ to correct the recording.”

Farah Diba Pahlavi chose a cousin, Kamran Diba, to be the architect and founding director for the new museum that would fill her with modern Iranian and Western art. Stein worked behind the scenes as a researcher and advisor to Karim Pasha Bahadori, the project’s chief of staff and a childhood friend of the empress.

Soon she was organizing scouting expeditions and writing detailed memos on important works that she wanted to acquire for the collection. She helped build relationships with dealers, collectors, and curators, and became a link between them and their superiors.

“I’ve been the filter on quality, and I’ve used that filter very heavily,” she said in a phone interview from Altadena, Los Angeles County, where she lives with her husband, Henry James Korn, a retired arts management specialist. “In order to make a statement about history and context as well as quality and rarity, these were the criteria, not how much something cost. It was a dream job in that regard. “

However, their role remained extremely limited. She never witnessed or participated in negotiations and was unaware of the prices paid for the work. Without this firsthand information, she cannot fill in some of the gaps in her memoir.

Stein started working when she was still living in New York. During a 10-day hurricane in May 1975, the museum’s acquisition team came home with 125 works they had identified for purchase. These included important pieces by Picasso: a cubist painting “Open Window in the Rue de Penthièvre in Paris”, a tapestry “Secrets (Confidentialities) or Inspiration” and a bronze sculpture “Baboon and Young”. She adored the sculpture because Stein said, “I was looking for things that were accessible to an uneducated audience. It was just adorable. “

Thanks to a conversation with Klaus Perls, the owner of the Perls Galleries and Calder’s main dealer in the USA, she discovered Calder’s “The Orange Fish” mobile during this trip. Stein and her colleagues also visited the SoHo loft owned by the Museum of Modern Art’s curator, William Rubin, to study Pollock’s “Murals on Red Indian Ground” before purchasing. “I wasn’t the one to find the painting, but I really liked it,” she said.

In Iran, she reported to Bahadori, whom she described as “remote”. She could go months without seeing him. “He couldn’t look me in the eyes,” she wrote after an incident he was making progress on, which she rejected. She also claims he doesn’t know anything about art. “Whenever I met with him, I felt that it was my job to teach him art history,” she said.

Eventually she won his trust and asked him to boldly buy: sculptures like Alberto Giacometti’s “Standing Woman I” and “Walking Man I”; Mark Rothko’s “Sienna, Orange and Black on Dark Brown” and “No. 2 (yellow center) ”; Roy Lichtenstein’s “Roto Broil”; and prints like Edvard Munch’s “Self-Portrait”. She pushed for the acquisition of Francis Bacon’s Reclining Man With Sculpture and Last Object, a unique Dada sculpture by Man Ray from his metronome series, when they were auctioned.

But Bahadori was the team’s public face; Stone had to stay in the shade. Her suspicions that he “stole the credit for my hard work increased over time,” Stein wrote. Her reputation in the museum deteriorated when Diba was appointed director. “I became at the heart of everyone’s pursuit of power, and eventually I had no role,” she said.

She was even charged with bribery. “Bribery was the way to work in Iran and I was accused by people who knew better that I would not take bribes,” she said.

She left Iran in mid-1977 and returned for a brief visit when the museum opened in October.

In her memoir, Stein also tells the story of her decision to quit her job as deputy curator at MoMA to live in Iran. “I was completely unprepared for the shock of the intense heat and the complexities that life in the Third World would bring.”

She found a one bedroom apartment with central heating, air conditioning and a shopping mall on the lower levels. She was allowed to travel freely across the country, even to remote places like Rasht in the north and Bandar Abbas in the Persian Gulf.

At a time when the SAVAK, the Shah’s secret police, spied on, arrested, tortured and killed his political opponents, it said: “I have lived my life regularly. I wasn’t worried about speaking on the phone. “

She had Iranian friends but also hugged the large American expat community. (She describes a July 4th party for 1,000 guests hosted by Richard Helms, the American ambassador and former director of Central Intelligence, on the vast embassy grounds, long before militants seized it and held American diplomats hostage for 444 days.)

Alcohol was legal and abundant at the time. A nightly party hosted by a wealthy young Qajar prince at his “Hollywood-style Playboy mansion” in Isfahan turned out to be an “unexpected exercise in debauchery” with some guests drinking alcohol, smoking opium or hashish and who consumed cocaine wrote.

Although she decided to frame the book around Farah Diba Pahlavi, whom she refers to as “confidante” in the book, Stein said she had only three brief encounters with the empress in Iran; Her only personal encounter with her after that was an interview in New York in 1991.

In an email response to written questions, Farah Diba Pahlavi said, “Donna Stein was a professional, hardworking person who delivered results. I trusted her opinion. We are on friendly terms and communicate by phone, though not too often. “

She added that “Ms. Stein established a sizable group of acquisitions across all media as the basis for a reputable national collection of modern and contemporary art. “

A completely different insight into the history of the museum and its works of art can be found in a limited coffee table book from 2018 entitled “Iran Modern: The Empress of Art”. A foreword by Farah Diba Pahlavi tells the story from her point of view, including her personal encounters with artists such as Chagall, Moore, Dalí and Warhol. “We couldn’t afford old foreign masterpieces, but we could afford modern art,” she wrote. It started on a firm foundation – with the French Impressionists – and moved forward in time. Elaborately illustrated, protected in a linen clamshell presentation case, the book comes with you

white gloves and a signature canvas shopping bag. It costs $ 895.

As for the museum, its western art collection remains, with the exception of a Warhol portrait of Farah Diba Pahlavi, which was slashed long ago by a vandal in one of the former palaces, and Willem de Kooning’s “Wife III” who owns the museum 1994 traded for the remains of a 16th century book known as Shahnameh or Book of Kings that contains miniatures. (Bought by the Iranians for less than $ 1 million, according to Stein, sold “Woman III” privately to hedge fund billionaire Steven A. Cohen for $ 137.5 million in 2006) The Islamic Republic’s art collection was in 2005 and some works, such as the Pollock, are on permanent display. Others, including Renoir’s “Gabrielle With Open Blouse” (1907) with a woman with bare breasts, were never shown publicly.

After a 32-month renovation, the museum reopened in late January with an exhibition of conceptual photography and a selection of 700 works of art donated from the estate of a well-known Iranian collector. The museum will publish its own study of the collection – it will take six volumes to tell the story.