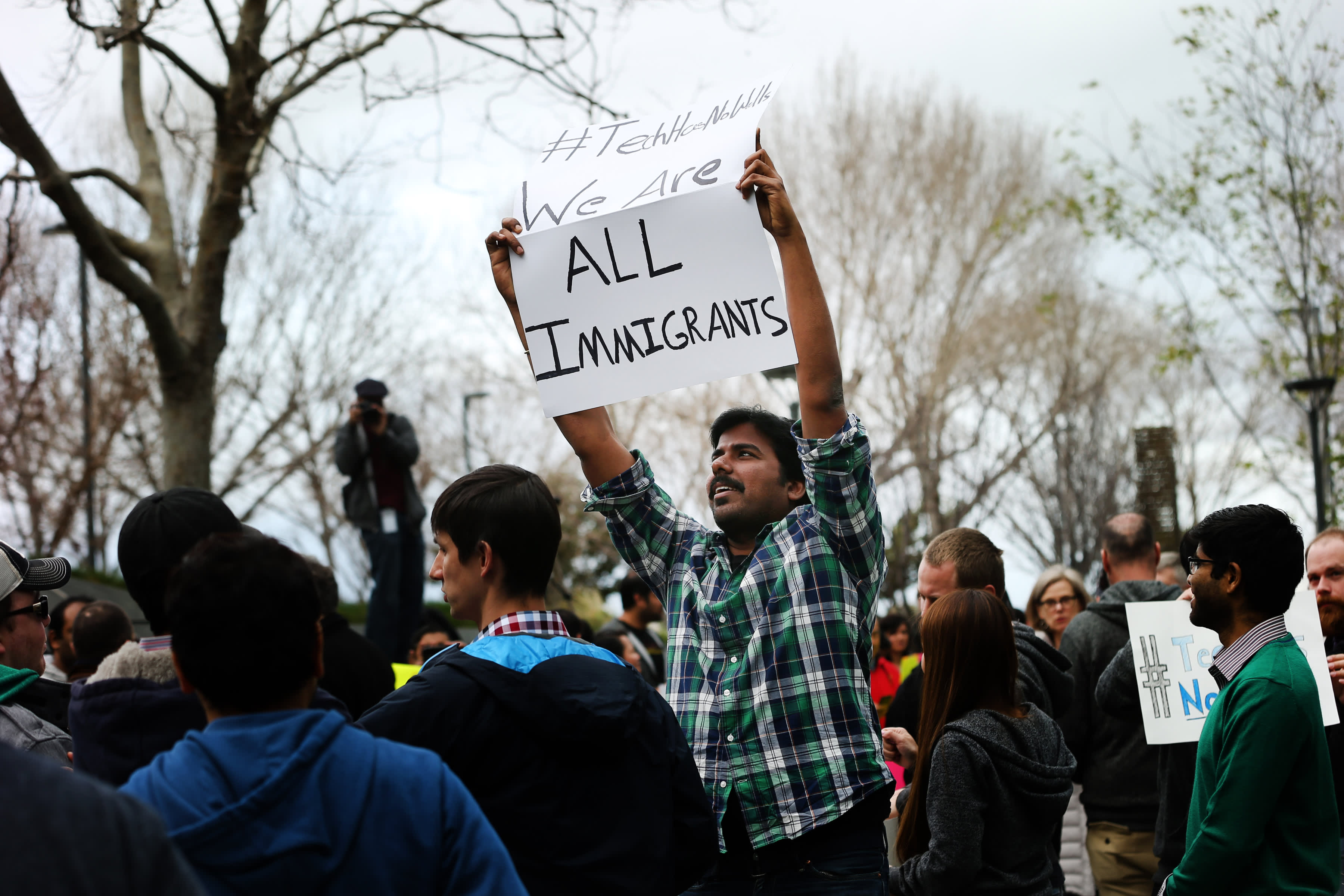 Muthumalla Dhandapani, an Indian immigrant on an H1-B visa and a Comcast employee in Sunnyvale, protested President Trump’s immigration orders in 2017.

The U.S. lacks a high-skilled workforce to meet the demand for computer jobs, and employers are looking for immigrant talent to fill that gap, according to a new report released Thursday.

For every unemployed computer or math worker in the country, there were more than seven job postings for computer-related jobs in 2020, the non-partisan immigration research group New American Economy found.

“A more nuanced and responsive policy on employment-based immigration could be one way to help the US recover from Covid-19 faster and more resiliently [pandemic] and future economic disruptions and crises, “the report says.

The study comes as record US jobs coincide with persistent unemployment, suggesting a mismatch in labor demand and supply. The US Chamber of Commerce launched a campaign last week calling for an increase in employment-based immigration to address labor shortages.

According to an analysis by NAE, employers in the US posted 1.36 million open positions for computer-related positions in 2020. Still, there were only 177,000 unemployed in computing and math jobs last year, the NAE found using data from the Department of Labor.

“Even something as powerful and traumatic and unprecedented as Covid has not hurt the demand for and shortage of highly skilled STEM talent in the country,” said Dick Burke, president and CEO of Envoy Global, an immigration services company who led the study.

Employers continued to search for highly skilled immigrants to fill the labor shortage during the pandemic. In 2020, 371,641 foreign work requests were submitted for computer-related jobs, the NAE reported.

The US relies disproportionately on foreign-born talent in computing. Immigrants made up 25% of the computer workforce in 2019, according to an analysis of census data by the NAE, compared to 17.4% of the broader workforce, according to the Department of Labor.

Seven of the top ten fastest growing jobs for immigrants, as measured by job certification applications, were computer-related, NAE reported.

A 2020 study of government data from the bipartisan National Foundation for American Policy found that a higher proportion of H-1B visa holders – the permit for highly skilled immigrants – in a particular occupation lowered unemployment rates and increased income growth rates for those in the United States USA born worker.

“We haven’t revised our legal immigration categories, including business immigration, since 1990. Some of these categories do not meet our needs in the United States today, ”said Stephen Yale-Loehr, professor of immigration law at Cornell Law School who was not involved in the NAE study.

“The pandemic has exacerbated these inconsistencies because people who are urgently needed to restart various businesses have not been able to enter the United States,” said Yale-Loehr.

Google launched a judicial filing in May in support of H-4 work permits for spouses of H1-B visa holders. The signatories of the Amicus briefing also included Amazon, Apple and Microsoft. The companies said that H-4 workers are essential to their business, and found that two-thirds of employed H-4 visa holders work in science, technology, and math.

Did you like this article?
For exclusive stock selection, investment ideas and global CNBC livestream
Sign up for CNBC Pro
Start your free trial now