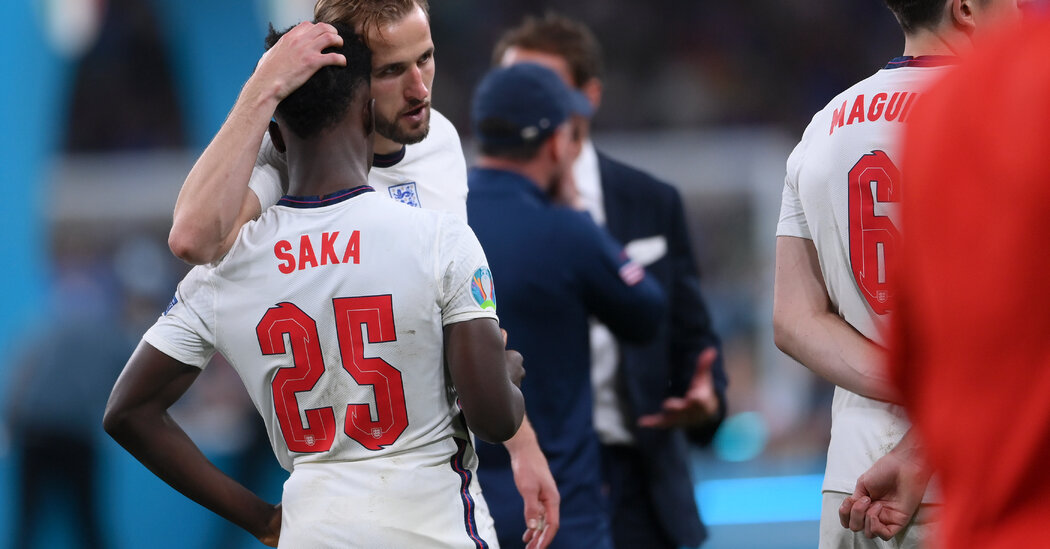 After Bukayo Saka missed a penalty for England’s national team in the final of the European Football Championship on Sunday, he and several other players were overwhelmed by a wave of racial abuse.

People posted monkey emojis and racist nicknames on Twitter, Instagram and Facebook to insult Saka, Marcus Rashford and Jadon Sancho, all black players who missed their penalties in the penalty shoot-out against rival Italy. Prime Minister Boris Johnson, Prince William and others were quick to condemn the ugly outburst of racist comments, particularly against a team that had become symbols of England’s racial diversity.

On Thursday, 19-year-old Saka spoke for the first time since the final on Sunday. In a statement on Twitter, he condemned the online bigotry that he and his teammates faced. After saying how disappointed and sad he was with the loss, Saka targeted Instagram, Facebook and Twitter, urging them to do more to combat the abuse.

“On the social media platforms Instagram, Twitter and Facebook, I do not want children or adults to receive the hateful and hurtful messages that I, Marcus and Jadon received this week,” wrote Saka. “I knew immediately what kind of hatred I was going to receive, and it’s a sad reality that your powerful platforms aren’t doing enough to stop this news.”

Saka’s comments contributed to the platforms’ growing calls for action to be taken against hate speech.

On Wednesday, Mr Johnson said he had warned representatives from Facebook, Instagram, Twitter, TikTok and Snapchat that they would face fines under proposed UK online safety legislation if they did not remove hate speech and racism from their platforms.

The Football Association of England also issued a statement stating that “social media companies must take greater responsibility and take action to ban abusers from their platforms, collect evidence that can lead to prosecution, and support, rid the platforms of this type of heinous abuse. ”

Facebook, which owns Instagram, said it was deleting comments and accounts that directed abuse against England’s team and sharing information with law enforcement. Four people had been arrested for racist online attacks on England’s players, the British police said on Thursday.

Twitter said it removed more than 1,000 tweets and permanently banned “a number of accounts” for violating its rules.

Facebook and Twitter have long struggled with hate speech on their platforms. Last year, during the Black Lives Matter movement and just months before the presidential election, civil rights groups called on advertisers to boycott Facebook if it stopped doing anything to combat toxic speech and misinformation on its website.

The issue became particularly heated last year, ahead of the presidential election, when President Donald J. Trump spread falsehoods about the vote and veiled threats against lawmakers. In January, after a violent mob stormed the U.S. Capitol, Twitter and Facebook banned Trump from their speaking platforms, which they said had the potential to incite more violence.