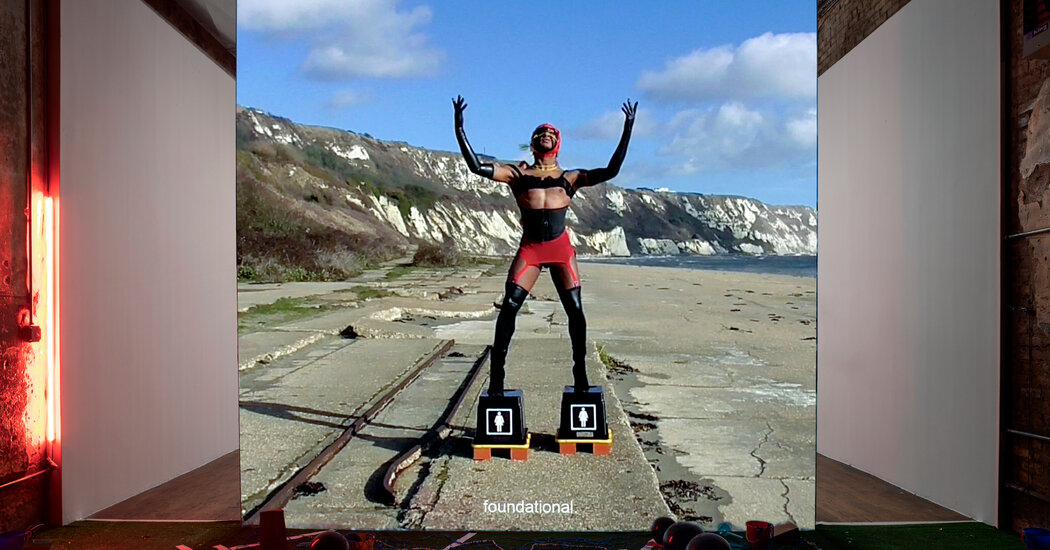 This Brooklyn-based artist takes three baths a day: one in the morning, one at noon to reset, and one at night. She usually arranges her crystals, flowers, and essential oils and turns around on a podcast, often a real crime.

In late June, she bathed in an artist’s residence in rural Wisconsin overlooking a cornfield. Natural springs on the 1,000 acre site fed a hose that filled an outdoor tub.

Thomas, 31, creates space and time to move carefully through life. That intent defines her solo exhibition at Participant Inc., a non-profit art space in the Lower East Side. She typically creates live performances and multimedia installations, which she then tours as evening performances.

The show’s title, “Hands Up, Ass Out,” alludes to the “hands up, don’t shoot,” protest slogan that was enforced after the 2014 shooting of Michael Brown in Ferguson, Missouri, in submission – but Thomas quickly reverses it around.

“There is a loss of power,” she said. “But then being ‘screwed’ is like stepping back into your power. Because it’s like this is my place. “

“Hands Up, Ass Out,” curated by Shehab Isis Awad, premieres on July 18th with a 24-hour premiere of Thomas’ latest video, “I Looked Up at the Sky and I, Imagined All of the Stars Were My Sisters” culminate. It will be shown on the gallery’s website, Participant After Dark.

The exhibition spans seven years of work, from 2014 to 2020, a time when the artist presented her work around the world, from Mexico City to Finland. In 2014 she graduated from the School of the Art Institute of Chicago with a Masters degree. “The Poetics of Trespassing”, her thesis, which was included in the Participant Show, earned her an invitation to the Spill Festival in London. Robert Pacitti, the festival’s founder and artistic director at the time, first saw her work in Chicago.

“I was immediately impressed by the intensity of their presence. In performance mode, she has a tangible agency that fills a room – really, it’s electric, ”Pacitti said in an email. “There is a constant reconfiguration of space, physically, politically, emotionally – there is a transformation in the game. And all of this with such power and yet also a unique grace. “

Step inside Participant Inc. and the first thing that greets you is silence. “The Poetics of Trespassing” contains three videos that were originally performed as one piece and later filmed for the camera. You are playing on three Sony box monitors without sound.

This early work explores “thinginess,” as Thomas puts it – how black bodies are used as available labor and housekeeping. In a video performance Thomas himself becomes a broom, who first sweeps flour from the floor with his hands and then with his mouth, the head of a broom firmly clenched between his teeth.

In “The Poetics,” she said, “I started thinking about ideas of visibility, hypervisibility, thinking about what it means to enter or pass through the world, to see or to see people?” Thomas added, “ And this idea of ​​blackness outside of a binary structure or a co-dependent structure. “

Thomas identifies as Black, Trans and Femme – converging identities that have been reduced, exploited and suppressed throughout history. “Hands Up, Ass Out” traces the artist’s journey from this symbolism to transcendence.

Charged symbols such as flour and coffee underline the materiality of our economy and its dependence on available labor. Their recurring use of coffee grounds is reminiscent of plantations and the transatlantic slave trade. In one video, Thomas slowly sticks coffee filters to her bare chest with a brush, her movements are deliberately oozing.

“The body is central to everything,” said Thomas about her work. “But it is also the case that the body should change its shape. And for me like a new language. “

This focus on the body – from references to physical work to a hanging, transparent panel of a naked Thomas – consciously connects the dots between the three core pieces of the exhibition. The artist draws on the physicality and athleticism that have played a prominent role in her life.

Raised in Florida, she played soccer from the age of seven and became almost a college runner. But she got drawn to the arts during her childhood and instead ended up at the School of Visual Arts in New York.

In the second section of the show, “Distance is Not Separation” uses the body as a vessel to reflect on identities – like Thomas’s – that are often “wrapped up”.

“The body always adapts to the language that has to be read,” said Thomas. “In many ways, the body transcribes that for me.”

Another sculpture stands in the middle of the floor. Twin towers made of concrete blocks, sugar cones, red bricks and full bottles of Heineken beer form a kind of bridge. In between there are strands of black hair, sporty yellow flower hair clips and red double-pearl ponytail ties that also exude physicality. The work relates to the role of the hairdresser: the care work – which is often done by black women and females, Thomas seems to say – opens moments of liberation from tokenization through their intimacy.

Awad, whom Thomas calls a “sister-friend,” bonded by the value they place on caring. Awad’s curatorial agency Executive Care is all about trust, slowness and mutual help. The couple met two years ago at Today, a bar in Ridgewood, Queens where Thomas was working on the door. For Awad, who identifies as non-binary, transfemme, the collaboration felt very natural.

Thomas “knows exactly how her work works so well that it gets you across – she gave me the language to get to know myself better,” said Awad. “It gave me language to know the world, to move and to inhabit my body even more authentically.”

When Thomas created “My Last American Dollar” – the chronological end of her work – she felt the closest to her own authenticity. The show traces a path from submission to emancipation through the last room.

“It takes you from moments of the bleak, stark reality of life in a black, talented body to getting you to the party,” Awad said. “The party we throw for ourselves because we no longer wait for someone to throw a party for us.”

“My Last American Dollar” literally opens up a party scene. White adhesive tape marks the random lines of a soccer field – the place where Thomas felt most free as an athlete. The field is littered with foil confetti that Thomas said was some kind of protective armor for those who have finished the trip.

The AstroTurf installation, bathed in red light, transforms the soccer field into a safe haven, a sign that Thomas feels comfortable in her skin, as an artist and as a person. At the same time, his video components refer to the Middle Passage – the arduous journey of the artist’s ancestors. In this sense, the field is a community place where people of color come together to celebrate the arrival.

On a screen in front of it, Thomas is standing on two overturned shopping baskets, both of which have bathroom-style logos of cartoon women. She poses triumphantly and freely in front of the crashing waves.

“I really want people to come on the show with the idea that we are here,” said Thomas. “This room is for you. This space is created for us to come and take up space. “