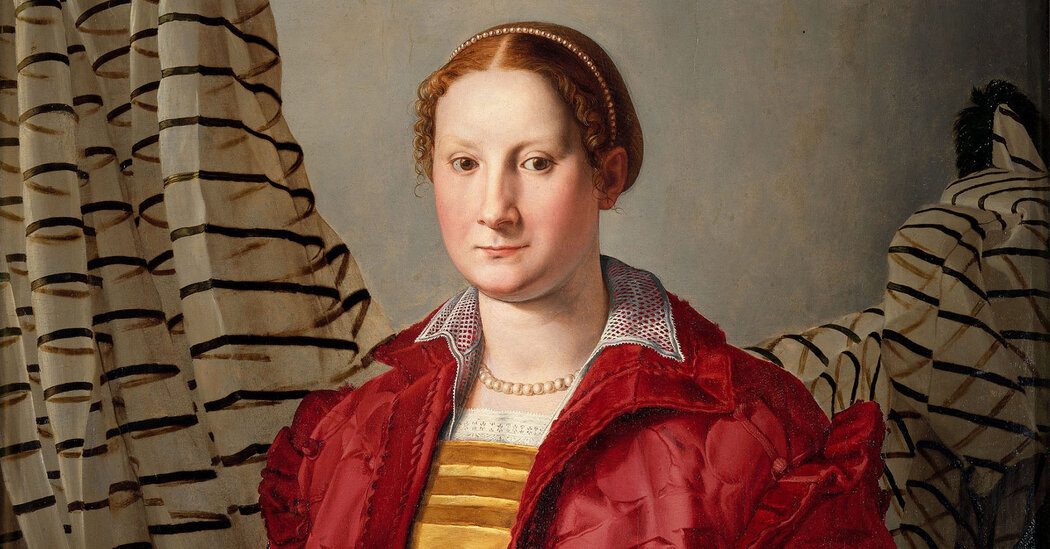 Florence, the cradle of the High Renaissance of the early modern period, is hardly imaginable without its greedy, viable, culturally conscious first family, the Medici. Crowned and uncrowned, in times of supposed republican government and not, they largely ruled the city-state from the middle of the 14th to the middle of the 18th century or allowed their power to be consolidated through art.

They excelled in banking and flourished especially when their branch in Rome became the tacit banker of the Popes. They also populated the hierarchy of the Catholic Church with relatives, including popes, most notably Leo X – nee Giovanni di Lorenzo de ‘Medici – who became Bishop of Rome in 1513, followed by his cousin Clement VII (born Giulio de’ Medici). Both worked diligently for the family.

The Medici held up through exile, popular uprisings, war with neighboring city-states, chronic street fights, a fit of violent religious fundamentalism, plague attacks, and a devastating siege. With the rise of Alessandro de ‘Medici, who became the first hereditary Duke of Florence in 1532, the family returned to power.

In “The Medici: Portraits and Politics, 1512-1570”, a magnificent, powerful exhibition in the Metropolitan Museum of Art, we accompany the family in their last bourgeois splendor. Most of the shows revolve around Cosimo I de ‘Medici (1519-1574), who at the age of 17 came from a “younger” line of the Medici and at 17 became Duke of Florence. But he knew what it was about. He reorganized the city’s bureaucracy and became the last of the dynasty’s three great cultural judges. In front of him stood Cosimo the Elder (1389-1464) and his grandson Lorenzo the Magnificent (1449-1492), both de facto rulers because of their wealth and their cunning. The couple’s joint patronage extended the High Renaissance, from Donatello and Brunelleschi to Michelangelo and Leonardo da Vinci.

The exhibition includes around 90 objects: painted portraits, portrait busts and reliefs, books and manuscripts, medals and cameos, some beautiful drawings and some weapons, including a sword that was once used by Charles V, Emperor of the Holy Roman Empire, often an opponent of the Medici, belonged. Organized by Keith Christiansen, the retired chairman of the Met’s European painting department, and Carlo Falciani, professor of art history at the Accademia di Belle Arti, Florence, it shows the transformative effect of Cosimo’s patronage on portraiture and the rise of mannerism. which followed the High Renaissance and countered its emphasis on grace, order and natural proportions with tricks: elongated bodies, complex poses and exaggerated perspective.

When Cosimo became the second Duke of Florence, the city’s political importance faded, as did the Renaissance ideals of balance and rationality. Cosimo saw the task in maintaining the illusion of Medici power through art. And so he benefited from several developments: the advancing secularization of art and painting, the growing attention to real people and their increasing status as a wearable market good. These were spurred in part by the increasing use of oil paint over egg tempera, which allowed for more luscious colors and textures – all the better to represent the one percent. And paintings could now be copied and sent all over Italy and Europe in order to promote Cosimo I, the Medici and Florence at the same time.

The star here is the accomplished Agnolo Bronzino, who became one of Cosimo I’s court painters in 1539 and created more than half of the 49 paintings on display. His works appear in the six galleries of the exhibition and dominate entire walls.

Almost all of his pictures are the culmination of mannerist distortion and unbalanced elegance, androgynous sensuality, with an astonishingly consistent perfection of arrogance and surface. It is as if Bronzino had studied the porcelain purity of the Madonnas by Raffael and Botticelli and passed it on everywhere. His mostly naked “Saint John the Baptist” (1560-61) is a voluptuous young man whose peach and cream complexion reaches down to the toes. Nearby, a half-length painting of Saint Sebastian introduces his subject as an almost sloppy youth with auburn hair and a single arrow piercing his sleek torso.

The exhibition is episodic and unpredictable in a positive sense. His focus changes gallery after gallery. An impressive combination of history, art history, backstories and gossip is visually fueled by the constant tension between naturalism and artistry: in contrast to Bronzino’s treatment, the softer, more forgiving style of Francesco Salviati, a lesser-known mannerist and second most represented artist, stands in the Exhibition. He is one of his revelations moving in and out of Bronzino’s orbit, but ultimately it seems that he cannot give up naturalism.

And all assembled like a Swiss watch; there is nothing that is not cross-referenced. Jacopo da Pontormo’s somber portrait of the first Duke of Florence, Alessandro de ‘Medici, from 1534-35, shows him in mourning clothes for Clement VII, as if one were listening. Next to Alessandro, an easily overlooked bronze medal shows his distant cousin Lorenzino de ‘Medici, whom the story remembers when he murdered Alessandro in 1537 and paved the way for Cosimo I. The murderer commissioned the medal himself in the form of a graceful Brutus.

Elsewhere, the weird handwriting may be drawn to the bound manuscript in which Bronzino, a poet as serious as he was painter, recorded his poems and the poems of his correspondents written on them. His beautiful handwriting appears on the open pages of a book with Petrarch sonnets, which his close friend, the poet Laura Battiferri, keeps, the subject of a particularly virtuoso portrait, which is characterized by her eagle profile and the almost transparent short veil.

Bronzino’s mannerism emerges from the first gallery in a portrait of an imperious young woman in bright red with a lap dog from 1532-33. Her cool, radiant precision is enhanced by the contrast to her duller, less assertive neighbor: a similarly posed woman in pink by Pier Francesco Foschi. Pontormo (Bronzino’s teacher) repeats this amazing sophistication and aloofness with more warmth and suppleness in “Portrait of a Halberdier (probably Francesco Guardi)”, an androgynous young aristocrat with a narrow waist and a sleepy snobbery.

The Met has dedicated a gallery to the very important topic of family and succession and presents a welcome female theme: Eleonora di Toledo, the able wife of Cosimo I, and some of her sons. (She had 11 children.) One of her robes can also be seen, impressively intact, made of deep red velvet, with tied sleeves, which appear in her portraits. Nearby, the first Bronzino portrait of her husband in the series shows him in spiky armor, looking cautiously to the right. A nice touch: his hand, which rests on his shiny helmet, is doubled by its perfect reflection.

The large middle section of the show is devoted to Cosimo’s exploration of literature and the revival of humanism. Across from his wall of files – all male, all by Bronzino – stand a row of thoughtful men, mostly young, in black and with books. Most are members of the Accademia Fiorentina, which Cosimo sponsored. The Met’s large bronzino “Portrait of a Young Man With a Book” (1530s) presents an arrogant youth in strikingly expensive black. The contrast between this work and a recent acquisition, Salvati’s “Carlo Rimbotti”, a smaller, much more accessible portrait, triggered the idea for this exhibition, as Christiansen explains in his revealing catalog introduction.

In the last spectacular gallery it is only Bronzino and Salviati who let off steam, so to speak. The Medici as subjects have disappeared, although both artists temporarily worked in the Palazzo Vecchio, the historic building that Cosimo had taken as a private residence. Ultimately, Bronzino’s invigorating sense of style would prevail, immediately legible like a brand that culminates here in a show stopper like the portrait of a woman who is provisionally identified as Cassandra Bandini, who breaks through as a real person without destroying the artistry. Behind her is a surging cascade made of a semi-transparent, dark green striped textile, almost abstract. Finally, there’s Bronzino’s portrait of the military leader Stefano Colonna in glamorous matte black armor in front of what looks like purple taffeta. Next to him hangs the exquisite black chalk study of his delicate, bearded face.

Against this background, Salvati’s pictures seem motley, at least initially. Whenever Bronzinos volleys land in the same spot over and over again, Salviati seems to be trying a different setback each time. In a portrait of Cardinal Rodolfo Pio da Carpi, Canon Clement VII, he relies on intensely psychological, realistic rigor. But Salviati’s “Portrait of a Young Man with a Dog” has many mannerist attributes, from the elongated neck, the small head and the boneless fingers to the spatial and symbolic ambiguities in the background: a cracked wall, a floating angel and a piece of landscape patch.

And to modern eyes, Salviati’s “Portrait of a Man” seems almost a mannerist prank, with its appealing theme – arms on hips, gloves in hand, the little ring on display – and a confusing scene with an allegorical river god and a kind Florentine lion. Bordering on vamping, the knotted green fabric is behind him. The label says it means the bonds of love, but here it can be read as an extravagant assault on its rival Bronzino’s more routine fondness for green, evident in several of the gallery’s other works.

Then Salviati ends on a high note, turning more to the real, not the Mannerist, world: his magnificent portrait of Bindo Altoviti, a wealthy banker who opposed the Medici and confiscated his Florentine property from Cosimo. There are real shadows in his face, his mouth seems to be speaking just as his gentle eyes begin to blink. Not a single weakened finger in sight. He’s almost one of us. His picture offers a place to pause, connect and take a deep breath in this extraordinary, complex choreographed show.

Saturday through October 11, Metropolitan Museum of Art, 1000 Fifth Avenue, Manhattan, (212) 535-7710; metmuseum.org. Currently open to members. Admission is with a timed ticket or reservation.