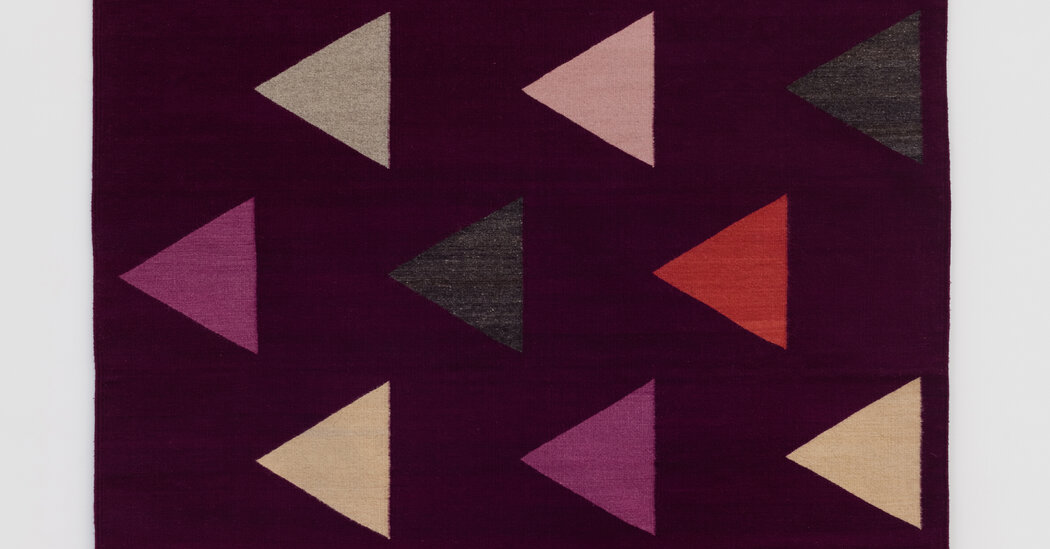 Textiles are in the same place today as ceramics were a decade ago: ubiquitous in contemporary art and used in a variety of ways. With just four artists, “Threads” explores some of the possibilities. In the works here, textiles are produced, appropriated and suggested.

The abstract artist Ulrike Müller leads the way with “Rug (con triángulos)”, a large hand-woven piece of wool (as here for the floor or wall). Its rich purple field is punctuated by 18 large triangles of various hues (including rust, pink, and dark tweedy green) that form a beautiful meditation on the color effects of dyed and woven wool. The polymathic artist Steve Reinke provides a breathtaking representation of 22 small needle points that are searing in color, largely abstract and very different from his ironic, reality-based video work. They resemble both miniature TV monitors and paintings and are well above their bantam weight.

In wall pieces with the titles “Wound” and “Burden”, Tuesday Smillie superimposes different plumes, lengths and remnants of fabric and plastic and illuminates hierarchies of gender, class and taste with a precision and subtlety that slowly reveals itself. Look for details – a bit of language, for example a pink denim back pocket on a surface of pink moiré. Johnathan Payne’s modest lattices are made from shredded paper and plaster of paris, then sewn together in sections like a quilt. They are painted with brushed layers of paint on the front and back, peeping through each other on the front, while throwing reflections on the wall on the back. These pieces cross like girders on a bridge and suggest a kind of architectural point. They lavishly complicate the lattice that underlies both classical modernism and weaving. This is an excellent show.

Peter Sacks grew up during the anti-apartheid movement in Durban, South Africa, and spent many years in America as a poet and English professor. One way to counteract these diverse cultural influences is to collage scraps of cotton, burlap, and lace together with pieces of wood, occasionally pieces written on paper, and blue cuffs and collars on corrugated cardboard backgrounds. In Republic, the imposing triptych at the center of his great new show at Sperone Westwater, the shifting borders and overlapping demands of a multi-ethnic republic – like ours or that of South Africa – feel both grand and precarious at the same time. Two flag-like strips of heavily patterned fabric that seem to have frozen in the middle of the flutter make the tension almost unbearable: When will they move?

“Mare Incognitum,” the other big piece on the show, is made up of 90 square, hand-sized panels. Above, a row of dhow sails sails from right to left; Basically, sea snakes, real shells and an abundance of brightly colored fidgets make the sea a teeming archetype, a multitude of details that lose their specificity in the chaos of their number. Of the remaining pieces in the show, the best are a series of deceptively simple portraits of dancing sangomas or Zulu healers on paper. Only loosely figurative, they stimulate the imagination like passing clouds.

The artist Kazuko Miyamoto started her career as a minimalist. In the 1970s she made free abstract paintings and geometric, modular sculptures before switching to a series called “String Constructions,” which consisted of taut lines of string stretched between nails in the wall and on the floor. They were solid but ethereal, drawings in space that seemed to shift as you moved around them.

Then, in 1983, Miyamoto had a solo show at the AIR Gallery in New York that looked very different. The sculptures were made of twigs and twisted brown paper, and many took on recognizable shapes, like handcrafted ladders and two large nests at opposite ends of the room. She maintained material simplicity, but channeled it into oversized, pointy handcrafted objects that evoked people to perform rituals or play. She used many of them as costume pieces or props in performances. The exhibition marked a turning point as she abandoned the austerity of minimalism and assumed a physical presence that was already lurking in her art.

The artist Sol LeWitt, who was both her friend and her employer, bought many of these sculptures, most of which were previously stored. Seen in “Kazuko Miyamoto in Sol LeWitt’s Collection”, they have not lost their power: they remain animated and enchanting in their simplicity. Curator Barbara Stehle rounded off the presentation with several strings showing where Miyamoto came from and a selection of works on kimonos showing where she was going. It’s a compelling mini-poll from an artist that deserves a more expansive look.

Ambiguity is the theme of K ”£‹ a in Knight, an unusually well thought-out group exhibition organized by Blake Oetting and Megan Yuan at the Helena Anrather Gallery. Not the ambiguity of unclear information, but of information that doesn’t quite correspond to the world it represents. Starting from the title with its familiar but still magical silent letter, each work on the show presents a slightly different twist on ambiguity as a kind of information in itself, as a way of conveying mood or calling up multiple ideas at the same time.

A pair of acrylic and charcoal paintings by Kate Mosher Hall depict something like desert freeway scenes in low light, while Julia Wachtel’s painting “The Disappearance of the Sign” vertically cuts an Old Milwaukee Beer ad and turns it gray. A vegetable cage in a Michael E. Smith baby shoe suggests a plant is growing and spreading, while at the same time making you feel like it’s not there. Two gray ceramic hoops by Manal Kara with photo-printed cotton inserts are strangely charming, while Walter Price’s drawing “Eye Witness” is resounding but inconclusive. A white man in a boxing suit holds up a wad of playing cards and cash; a black woman in silhouette, perhaps pregnant, kneels crying in front of him; Several viewers point with accusing fingers. One of them, as indicated by a dotted line, traces a square in the air, while the artist himself has drawn a rectangle around the entire picture. But who names what kind of square?