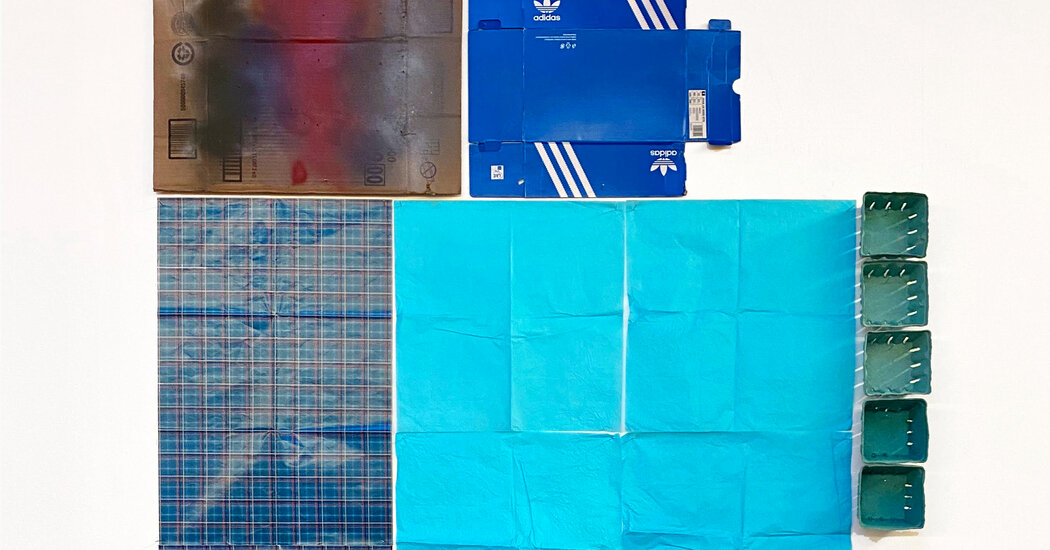 The deep content of Jack Pierson’s art is the vulnerability of life devoured by time. His main materials are objects that he processes into temporary arrangements, not finished works of art. His well-known word sculptures, for example, are basically removable assemblages made from the bulky, mismatched letters of different characters, individually nailed to the wall. What they spell can be raw or delicate: “You don’t own me”, “Abide” and “His calm waters”. His installation work focuses on one or two pieces of old furniture – a small dressing table, for example – and can suggest a corner of someone’s humble past. And his luscious photographs, whether of handsome young men or discarded moments from his own life, have an overt freshness that we know will wither.

Thanks to Lockdown, the works in “Five New Pieces”, Pierson’s exhibition in the Kerry Schuss Gallery, are made from materials from his studio: various sheets of plastic, paper, foil and fabric that he has pinned to the wall in angular arrangements resemble Paintings, but without their solidity. “Blue” is a combination of blue papers, a number of small berry boxes, a flattened Adidas box and a piece of spray-coated cardboard. “Pink” is based on the deep red of an Indian paisley bedspread, with flattened boxes for fruit and beer, Brillo and Cola. And “Empire”, mainly made of aluminum foil and clear plastic, is a clear homage to Andy Warhol and his famous film of the same name. “Xerox” dots dark garbage bags with ribbon, egg carton foam and an old jazz club poster, while the relatively worn “Ode” uses foam rubber, styrofoam and two pieces of cardboard with balls painted black and red. This piece most directly conjures up the work of Robert Rauschenberg, to whom Pierson owes an obvious debt, but who also manages to deal with the clarity of his compositions, his color and this fragile, clearly Piersonian elegance.

As well as being pretty, jewels are symbols of culture and status. They can mean wealth or something less obvious like patriotic pride. This was the case with cut steel and Berlin iron jewelry from the early 19th century that Prussian kings gave to citizens who donated more valuable gemstones to fund military campaigns.

Marsha Pels’ “Fallout Necklace” (2018) is a supercharged and oversized version of these unusual pieces. As part of a series called Trophies of Abuse, it hangs from the ceiling and fills an entire room. The artist has used an impressively intricate design made of patinated cast aluminum and steel with embedded glass portraits of world market leaders. They range from autocratic to democratic – Kim Jong-un to Donald J. Trump to Angela Merkel – and all are balanced within the display. The chain has the feel of a speculative artifact. An imposing treasure that points to the distorting effects of power.

In the next room hangs a more intimate work that Pels – a longtime sculptor who invested in both mastering materials and creating large conceptual installations – did 20 years earlier. “Pieta” (1998) creates the phantom shape of a woman from a fetish outfit made of cast bronze and a gas mask. Instead of rocking her child, she keeps a crystal cast baby away from her as if it were a victim.

This exhibition is entitled “Consolation”, but Pels’ works of art are more challenging than they are calming. Perhaps the consolation lies in turning complex emotions and weighty observations into objects that are bold and beautifully precise.

One of the biggest storms in the art world in 2020 included the postponement of a traveling retrospective of the work of Philip Guston (1913-1980), a white American artist who painted hooded figures commemorating members of the Ku Klux Klan. Hooded figures come from a completely different source in 2021: the paintings by Australian Aboriginal artist Gordon Hookey in Sacred Nation, Scared Nation, an online exhibition organized in collaboration with American artist Gary Simmons in Fort Gansevoort.

Hookey often focuses on popular glasses, and the sinister hooded figures appear as spectators and occasional stars of his paintings. Trump, Elvis Presley, Osama bin Laden, and a host of soccer players and political figures also appear on the paintings, which serve as harsh criticisms of racism, colonialism, and systemic oppression. Some of the works that I can mention here are “Sieg, Solidarity, Peace and Freedom” (2016) and “Elvis” (2003): both are colorful oil-on-canvas works in a cheerful, comic-inspired style Pop art language are formulated. indicating how cultural appropriation and racism permeate sport and pop music.

A number of other paintings have non-printable titles or text, often referring to female genitalia that soccer hooligans and thugs hurled at indigenous players on the field. Similar epithets have been used in paintings by artists such as Lee Lozano, Judith Bernstein, and Kathe Burkhart, who make feminist comments on violence against women. Here misogyny remains unexplained or cannot be fully translated, which is unfortunate since much of what Hookey’s works – like the hoods in Guston’s paintings – are praiseworthy, fearless and inspiring.

In 1979 the abstract painter Emily Mason left a joint studio and took over a huge loft on 20th Street in Chelsea. Mason, who died in 2019 at the age of 87, was the daughter of the great mid-century abstract expressionist Alice Trumbull Mason, and the painter she shared a studio with was her husband Wolf Kahn. So it stands to reason that the canvases she produced in her own new space – 22 examples make up “Chelsea Paintings,” her first posthumous New York gallery show – were larger and more lush than the work she had done before. (There’s also an exhibition of Klimt-like, but fantasy-colored views of birch forests by Kahn, who died last year, in the other room of the gallery.)

Their colors are so bubbly, in fact, that I confess they put me off at first. Cascading tides of bright yellows and pinks can look glaring, as can the often ragged edges between them. It takes a while to get used to the volume and pick out the subtleties. But when you do, you will find constructions as delicate and deceptive as spider silk.

The most successful of the pictures, or my favorite anyway, is “The Bullock Farm” (1987), in which an orange triangle crashes into yellow ground across a deep blue sky. The composition is balanced but not exactly harmonious, and none of the overlaps are exactly what they seem. As you try to orient yourself, the whole thing recedes like a desert mirage.