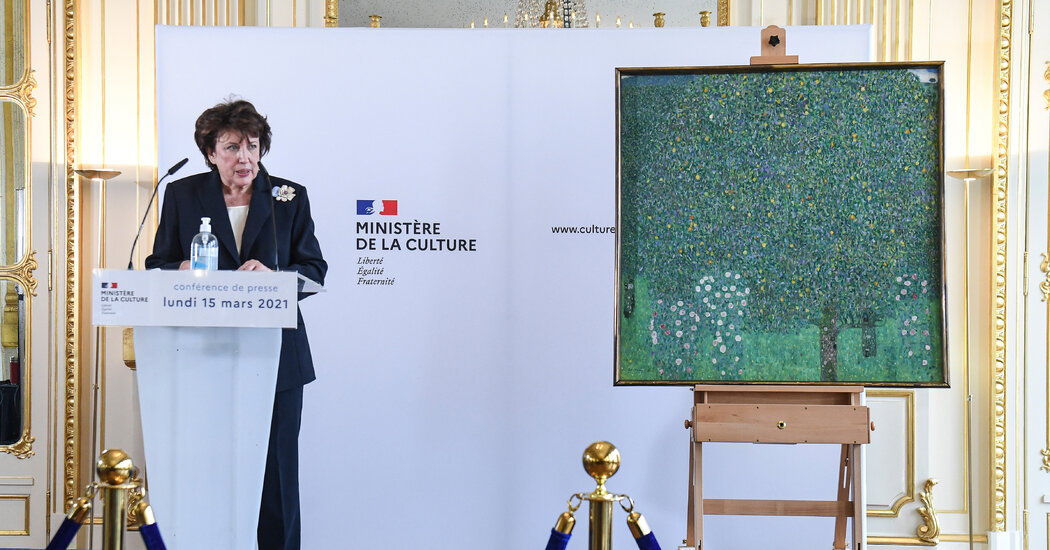 PARIS – France will return the only painting by Gustav Klimt in its national collection to the heirs of Nora Stiasny, a Jewish woman who sold it under duress after the Nazis annexed Austria, the French culture minister said on Monday.

Minister Roselyne Bachelot said it was difficult but necessary for France to part with Klimt’s “rose bushes under the trees” which she described as a “masterpiece”.

“It is the completion of an act of justice,” said Bachelot at a press conference in Paris next to the early 20th century painting, a lush green canvas with flecks of floral paint.

“Rosebushes Under the Trees,” currently located in the Musée d’Orsay in town, was not part of the special inventory of looted works of art that returned from Germany to France after the end of World War II. In contrast to those works of art that are not fully part of France’s national collections, the Klimt painting bought in 1980 is legally considered to be the “inalienable” property of the country.

That means Parliament must pass a law authorizing the refund, which Ms Bachelot said would be done as soon as possible.

Alfred Noll, an Austrian lawyer representing Stiasny’s heirs, said at the press conference that the family was “very satisfied and very grateful”.

Stiasny was born into a Jewish family in Vienna in 1898. The painting was passed on to her by her uncle Viktor Zuckerkandl, a wealthy steel tycoon and art collector who had bought “Rosebushes Under the Trees” in 1911.

But after the Nazis annexed Austria, they had to sell it “for next to nothing” in 1938 to survive, Bachelot said. Stiasny was deported to Poland in 1942 and died that year, along with her husband and son.

Ruth Pleyer, an Austrian art expert who investigated the painting’s provenance and advised Ms. Stiasny’s heirs, said at the press conference that the refund was “the equivalent of a miracle” for the family.

Stiasny had been evicted from her home and most of her personal belongings were thrown away after she was deported, Pleyer said, leaving few traces.

The man who bought the painting in 1938, a Nazi sympathizer and “so-called friend” who, according to Bachelot, “instigated” the sale, kept it until his death in 1960. The French state bought it in 1980 as In the years before it opened of the Musée d’Orsay, officials built the country’s modern art collection.

France inquired about the painting’s origins at the time but found no evidence that it had been forcibly sold, officials said Monday.

“All the necessary verifications have been made,” said Bachelot, adding that it was only in recent years that French and Austrian researchers and historians have fully understood the painting’s entire journey, a process that “was particularly arduous because of the destruction” of most of the evidence and the erosion of family memories, ”she added.

In 2019, a new task force was given a broader mandate to search for and return works of art that had been forcibly looted or sold during the Nazi occupation after years of criticism that the French efforts had not been proactive enough. For example, Bachelot noted that the Louvre is currently reviewing all acquisitions made between 1933 and 1945.