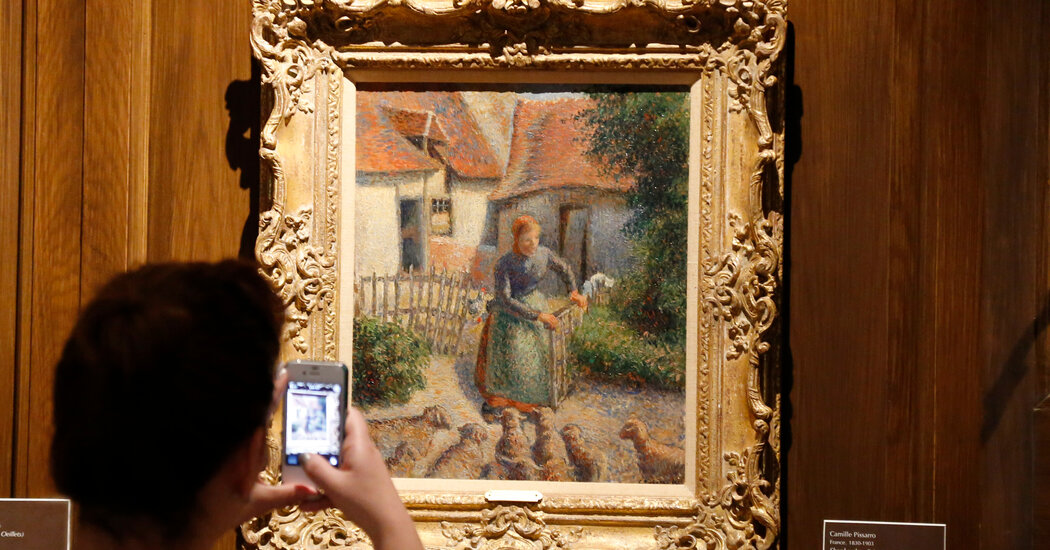 A Jewish family whose artwork was looted by the Nazis said Tuesday they were giving up their right to a Pissarro painting and transferring the property to the University of Oklahoma, where it was on display until 2017.

Léone Meyer, whose family collection was looted by the Nazis, said she was giving up her longstanding efforts to donate the painting to the Musée d’Orsay in Paris, where it has been on display in recent years. The title of the work “La Bergère” or “Shepherdess Bringing in Sheep” would instead go to the University of Oklahoma to ensure that the painting continues to be exhibited in both countries.

“I have now regained my freedom at a price that I fully accept,” said Dr. Meyer in a statement about her plan for the painting, which she discovered in the collection of the University of Oklahoma in 2012, who it was in 2000. It was later transferred to the museum in Paris.

The announcement appeared to end the dispute over the painting, which had led to legal proceedings in both France and the US and was already the subject of an earlier negotiated settlement. In 2016, Dr. Meyer and the University of Oklahoma to return the painting to them, but to display it in a museum in France for five years and then switch between the university and one or more French institutions every three years. As part of that plan, Dr. Meyer, 82, that the title of the painting, which Pissarro completed in 1886, would ultimately be transferred to an art institution in France.

But a legal tug-of-war began again after Dr. Meyer, a Holocaust survivor, refused to return the painting to Oklahoma next month as planned and tried to change the agreement to keep the painting permanently in France.

A Paris court was due on Wednesday to rule on their efforts to keep the painting in France after two previous judgments by French courts came against them and the American Alliance of Museums and Association of Art Museum Directors supported the university’s battle Get settlement.

Dr. Meyer had hoped to donate the work to the Musée d’Orsay, but said the museum had refused because it did not want to assume the associated costs and risks.

Under the terms of the original agreement, the University of Oklahoma paid for the cost of shipping and insuring the painting in transit while Dr. Meyer took over responsibility for the work in France. With the approval of the revised settlement, it no longer has to assume this responsibility.

The university will now take on the task of finding the French institutions that will accept the painting for their three-year rotating public exhibition and finding a long-term home for the painting in France.

In a statement, the University of Oklahoma said it would abide by the future rotation agreement that would allow the artwork to be moved between the Fred Jones Jr. Museum of Art and France. Regarding the Oklahoma University Foundation, she said it did not intend “the OU Foundation to keep the title of the painting long-term,” saying the painting could at some point have a home in another French public institution or the US Art in Embassies program can be found by the State Department.

Dr. Meyer and the University of Oklahoma and the OU Foundation “have reformulated and confirmed the original settlement agreement from 2016 with a mutually agreed change in order to achieve their goals,” the university said in a statement. Dr. Meyer had “transferred the title, interests and all existing connections with the Pissarro painting to the OU Foundation. In return, the OU parties have undertaken to identify and transfer ownership of a French public institution or the US Art in Embassies program, subject to the parties’ original agreement with a rotating three-year public exhibition. “

Until 1941 the painting was in the possession of Dr. Meyer, the businessman Raoul Meyer, and his wife Yvonne. Dr. Meyer’s father was the long-standing CEO of the department store chain Galeries Lafayette, which she later also chaired for several years.

In all these years of negotiations, the university never denied that the painting was stolen by the Nazis from the family during the occupation of France.

However, she said in the previous court proceedings that she had objected to the return of the work because of the procedural rules and the statute of limitations.

It also found evidence that the previous owners, members of the Weitzenhoffer family who bequeathed it to the university in 2000, had acted in good faith and purchased it from a New York gallery.

As part of the agreement, Dr. Meyer, a retired pediatrician, provided $ 500,000 to ensure the cost of the rotation is covered. For its part, the university has agreed to withdraw its entitlement to legal fees.

Dr. Meyer’s testimony showed that she understood that not everyone would be happy with her decision. “Some will regret this perpetual rotation,” she said, “and others will celebrate it, but the University of Oklahoma students will remember that this work belonged to Yvonne and Raoul Meyer and was looted by the Nazis in France in 1941.” . “