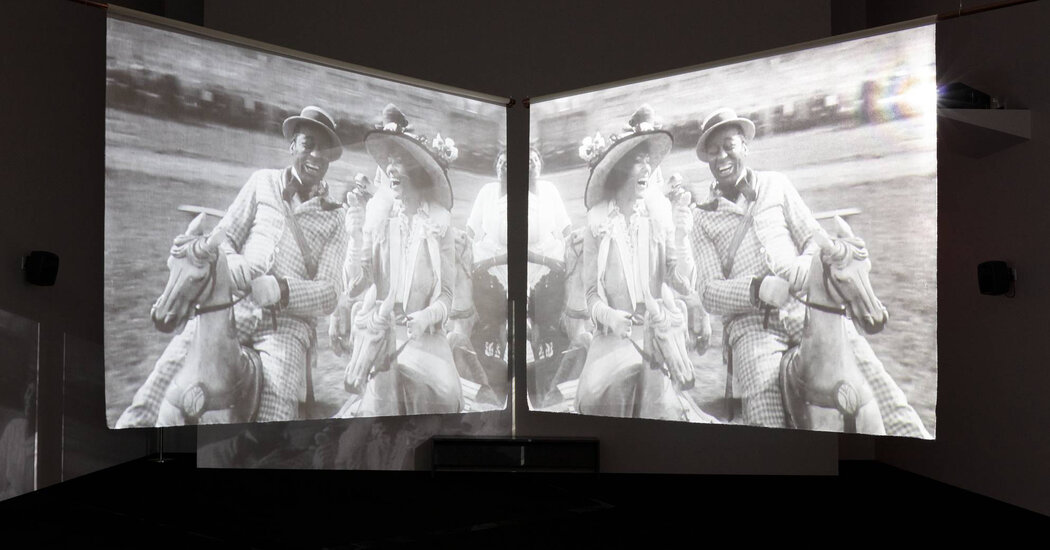 Garrett Bradley’s quick-silver authoritative video installation “America” ​​at the Museum of Modern Art is an indictment embroiled in a celebration. Completed in 2019, it recreates some of the signaling events of black life and culture in the United States in the early decades of the 20th century, reclaiming lost or overlooked portions of history in a display of inexhaustible narrative and spatial complexity.

This is Bradley’s first solo show in a New York museum, her first foray into three-dimensional space from the canvas, and the second in a series of joint exhibitions at MoMA and the Harlem Studio Museum. Basically, the larger, older institution offers the space; The smaller, younger, the better. It was organized by Thelma Golden, the studio museum’s director and chief curator, and Legacy Russell, its associate curator.

Like other black artists of her generation – including painter Amy Sherald – Bradley shies away from portraying the suffering of blacks. This tendency is particularly evident in Time (2020), an innovative feature film that focuses on a family’s journey through incarceration and won the Sundance Award for Best Director of an American Documentary that year. (It’s available on Amazon Prime Video and is a must-have.)

“America”, which can be seen through March 21st, pushes that country’s original sin of slavery and its ongoing tragedies into a middle ground. Racism is an inescapable shadow, but we need to make our own connections between scenes that are differently triumphant, mysterious, mundane, surreal and ironic. The numerous vignettes that Bradley recorded in black and white without sound for this work are short or very short; A dozen of them often refer to black achievements or tragic events obliquely, most of which happened between 1912 and 1929. The Library of Congress identified those years as a major void in film history: 70 percent of all films made back then were lost thanks to the busy studios, going from quiet to loud, tossing most of them out. In one act of reclamation, Bradley staged scenes referring to such moments as the 1919 murder of popular jazz band leader James Reese Europe, the first African American to receive a public funeral in New York, and the performance of Florence Price’s Symphony in 1933 note in E minor of the Chicago Symphony Orchestra – the first time a large orchestra played a work by a black woman.

With overlapping images projected onto, and broken by, four lightweight screens suspended in the center of a large gallery, Bradley’s ambitious endeavors reinvigorate post-minimalist appropriation and imaging. The play is based on an existing film: the lush, unfinished 1914 Lime Kiln Club Field Day, which was radical in its day because it focused on black joy and romance and its all-black cast, led by the great Bert Williams , a well-known comedian who appeared in black script. In other words, Bradley reconstructs both black (and therefore American) history and film history, claiming that the radical optimism of “Field Day” if it had been finished and released would have inspired additional films about black achievements.

Bradley’s “America” ​​sets us in motion, circling the screens and exploring the possible identities, stories and symbols of his changing stories and their regular moments of acoustic and cinematic lyric poetry. Not to mention a perceptual overload: does the piece use two, three or four channels? You think the images are compared in pairs – especially since only two projectors are visible – but suddenly not anymore. In every way, this work is a constant discovery.

The projection plays on a loop of nearly 24 minutes that feels shorter and confirms Williams’ stature with a formal portrait at the beginning, followed by stills of him on the set of Field Day, including one where he is with one of the films is advising two white directors. (The film was also unusual for an integrated crew.) From there, and in no particular order, the head of a woman in a leather pilot’s hat appears against clouds, an image as heroic as a postage stamp; then we see them rush across the room. She is representing Bessie Coleman, the first woman to obtain an international pilot’s license who was killed in a 1926 fall from an airplane while practicing a stunt. Symbolizing the founding of the National Negro League in baseball in 1920, a young man in team uniform swings a bat. His gesture merges seamlessly with the swing of his younger self. This one of several cinematic thrills Bradley builds into her structure.

Bradley’s best scenes have a depth that aids repetitive viewing and exploration. It was several times before I noticed that in the sequence about Price, a woman conducting a small orchestra suddenly got a blue ribbon that felt bad. It seemed to highlight the sometimes patronizing quality of white tolerance and black fatigue in a society whose racism primarily requires so much innovation.

Other less specifically racial sequences show two children sitting at the kitchen table in a modest apartment drifting off listening to a Bakelite radio, a staple of domestic life. A vignette becomes surreal and is reminiscent of the poetic paintings by Hughie Lee Smith: a group of excited boys meet a man who is selling balloons on a shabby, empty lot. The camera looks up at the balloons soaring in the sky as their seller appears to rise with them and then return to earth like a magician. The camera looks down at the boys’ unturned faces, registering a bewildering array of emotions.

A blank sheet of paper’s journey through multiple scenes illustrates the fluidity of Bradley’s camera, storytelling, and mutating meanings. It begins with a white sheet worn by a white man sitting under a tree in a sunny field – a strangely benevolent pastoral reference to “The Birth of a Nation” published in 1915 that glorified the Ku Klux Klan. In Bradley’s scene, a woman with an umbrella approaches the man calmly, tears off his robe and repairs it. The sheet turns into a robe in a baptism witnessed by several matrons in Sunday hats, and then folds on a clothesline where the boys return and try to pull it down. Eventually it settles in the dirt of a corral. There it is circled by mounted men, reminiscent of Buffalo Soldiers, a black cavalry regiment that took part in the 1916 Mexican expedition led by General John J. Pershing. One of the drivers picks up the sheet of paper with a long stick, which turns it into a flag. If you look up, you’ll notice that the four screens are held up by copper tubing that resembles flagpoles. Heraldic banners suddenly hang proudly in an ancestral hall.

Another strong part of Bradley’s endeavors is the luscious Mercury music played by Trevor Mathison and Udit Duseja and occasionally mixed with conversation. At some point you might hear a voice say, “America? That’s a tricky question. “