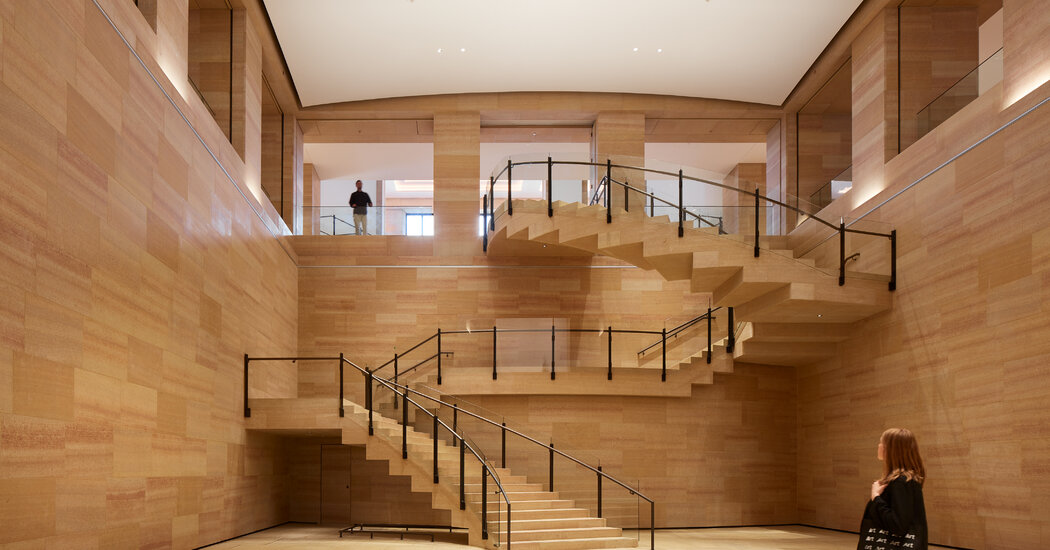 PHILADELPHIA – Do you know what’s fancier than spending a ton on a landmark? Spend a ton and barely show it.

When other museums and cultural institutions turned to Frank Gehry, the Canadian Angeleno and 92-year-old grand master of the torque of titanium, he conjured up both inventive and ostentatious buildings: metal curves in the Guggenheim Bilbao or in the Disney Hall in Los Angeles, or billowing glass sails in the Fondation Louis Vuitton in Paris. But here in Philadelphia, where he was commissioned to redesign one of the oldest and most important museums in the country, he left the stainless steel and the kinematics software at home.

Fifteen years after the Philadelphia Museum of Art commissioned Gehry to expand and renovate its Beaux Arts home on Benjamin Franklin Parkway, the first part of the job is complete – and discreet. His core project, as the museum calls it, has cleared and remodeled the underground bowels of his Greek Rebirth home to create 20,000 additional square feet of galleries, as well as a refreshed entrance and atrium with potential for performances and gatherings after the days of the pandemic. It has cost $ 233 million to date, and that’s just part one; Next up are more new underground galleries and a window that pierces the east staircase (you know, the one from “Rocky”).

You’ll see Gehry’s muted interventions first via the west entrance – which I still consider the back of the museum, though it’s been the main entrance for years. (The east entrance, away from the park path and up the steps, is closed for the time being.) It has more inviting glass doors and suitable ramps for wheelchair users. The west lobby, called Lenfest Hall, got bigger windows and was bared by the postmodern ticket booths designed by the museum’s previous architects Robert Venturi and Denise Scott Brown.

The east wall of the lobby was demolished and an auditorium was torn out to make way for a new central atrium clad in the same honey-colored limestone that the museum’s original architects used in 1928. Here you can see Gehry’s only concession for conspicuity in the form of a Piranesian spiral staircase that leads to the basement. Even that is dwarfed by the magnificent, arched walkway, which is adorned with Guastavino tiles and reappears after decades as a secret annexe. (There’s nothing down here right now but a few sculptures, a gift shop, and a little café; the macchiato was pretty good.)

One floor up are the new galleries, the design of which is satisfactorily boring – and in fact it speaks volumes about museum buildings in the 25 years since Bilbao, which now inspire us with architecture that you hardly notice. (Gehry and his husband used to be featured on the front pages of magazines as builders. Now everyone wants to be Lacaton & Vassal, whose extremely discreet renovation earned them this year’s Pritzker Prize.) That surgical approach, however, has always been Gehry’s plan. “It would be a real challenge to do something that is practically hidden and could get spectacular,” the architect told the New York Times in 2006 when the museum first approached him. Spectacular isn’t the word I would use for the result, but it’s definitely smart. I will take this every day.

When everything is done, this will be a very extensive museum, the layout of which could resemble that of the Musée du Louvre: an older U-shaped palace, the three wings of which are first reached through light-flooded rooms below. At the moment, Philly is still the right size for a pleasant long afternoon. In four hours you can complete most of the collection.

Saint-Gaudens’ gilded Diana still rules the main staircase, and Marcel Duchamp’s enigmatic “Étant Donnés” still invites Peeper to his wooden door. Thomas Eakins’ “The Gross Clinic,” that bloody masterpiece, is here right now – the museum shares it with the Pennsylvania Academy of Fine Arts. In the beautiful rotunda in the modern wing there are still Cézanne’s last and greatest “bathers”, although I’m interested in Édouard Manet’s “The Battle of Kearsarge and Alabama”: undoubtedly the greatest painting of the American Civil War that reinvented maritime painting current transatlantic media event.

Of two major temporary exhibitions, the more important is “Senga Nengudi: Topologies,” an overview of one of the most successful figures in American post-minimal sculpture and performance. (It was organized by the Lenbachhaus in Munich; it was shown there in 2019 and also toured São Paulo and Denver.) After studying in Los Angeles and Tokyo and doing early experiments with liquid-filled plastic, Nengudi began creating sculptures from used tights in 1975, sometimes shaped by internal wires. Some stretch to the ceiling and seem to have reached their limits. Some sag under the weight of sand and remember breasts, stones, or tumors.

These fragile and makeshift sculptures, collectively known as the “RSVP” series, are rarely seen in numbers like this. that alone makes this show an event. Its effect is also based on related performances, above all by the artist Maren Hassinger, who entangles her body in the elastic fabric as if the sculpture were another dancer, broken but revived. On this show, you’ll see both early photographic documentaries, a recent video of Hassinger dancing with Nengudi’s sculptures, as well as a number of television monitors of other performances that Nengudi and her colleagues did in Just Above Midtown, the groundbreaking black-owned gallery New York.

In the new temporary exhibition galleries is “New Grit”, a group exhibition of 25 Philadelphia artists who live here. The quality is mixed and a little too eager to be up to date, but local artists are the right focus for an initiation. In addition to the best-known names (Howardena Pindell, Alex Da Corte), David Hartt is the most valuable player, whose newly commissioned title “The Histories (Crépuscule)” combines tapestries and videos as well as pictures of Jamaican beaches and ice floes in Newfoundland that cross media and continents Hike.

Most surprising of all are the new American galleries devoted to art from the colonial days to the civil war. At least visually, they look great. Colored walls display the museum’s extensive collection of Charles Willson Peale and other American painters. There is a rich display of Spanish colonial art and an illuminating gallery of Philadelphia’s free black watchmakers, china makers, and silversmiths.

There is still a long way to go in terms of interpretation. New wall texts highlight the presence of blacks and indigenous peoples in Pennsylvania society, as well as the presence of slavery in a region that likes to see itself as more enlightened than the rest of America. (Not without reason: in 1790 there were seven times as many slaves in New York as in Pennsylvania.) However, this is done with an extreme focus on the individual biography, with the subject of each portrait being deleted because of its personal evil and other objects being hyped up for each assumed Connection to bondage.

Sure, I may not know! But whoever created this one bowl is hardly as important as the political and economic institutions that sustained their creation and the aesthetic forms that connect them to other times, places and cultures. Right now we’re just getting a new, moralistic language sprinkled over the same old story – and by the way, applying that language to American history only can only be described as short-sighted. In the same galleries, to name just one example, I saw a charger bearing the insignia of the Dutch East India Company, which introduced slavery on several continents. This happens without comment.

It will take more time for the museum – really for all of our museums – to come up with an approach that brings these objects into new relationships rather than starring them to indicate who was a nice person and who was a mean person. It is hardly impossible! It just means treating objects and images as more than a biographical record, but as vectors in a large and global network of images and ideas. When it comes to institutions tainted by colonial legacies, universal museums top the list of culprits – but who knows what new routes and lines of sight you can invent with the right renovation?