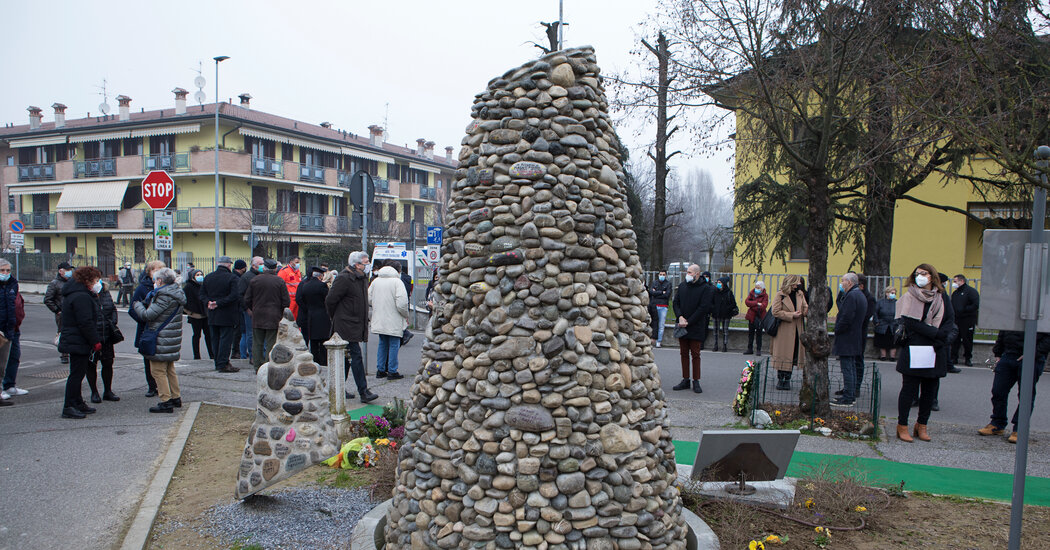 The Codogno monument is not the first in Lombardy, one of the Italian regions to be hit by the coronavirus first. Last August, the nearby town of Casalpusterlengo unveiled a memorial designed by Ottorino Buttarelli, a local artist, using stones stacked in a small tower to represent deceased city dwellers.

In an email exchange, Buttarelli said he involved the city’s residents in the creation of the monument. He asked them to go to the nearby Po to collect stones for the structure, and many wrote the names of loved ones who had lost them, and sometimes added personal messages or decorated them with stars and hearts.

“We have recognized that the people must mourn the need and urgency,” said Buttarelli. “The people in this village had to die in solitude and silence, often without a funeral. Bringing the stone and writing the name became the funeral, ”he continued.

While Italian monuments were intimate and local in character, more traditional monuments were also called for in Britain. Earlier this month, The Daily Mail, a conservative tabloid, launched a campaign to erect a statue to commemorate Tom Moore, an Army veteran better known as “Captain Tom”, who raised tens of millions of pounds for the UK’s health service during the Pandemic. He died of Covid-19 in February.

Jeremy Deller, a British artist who has designed several works of art in public spaces, said in a telephone interview that it would be difficult to create a large central memorial to the pandemic: there are no clear symbols and simply too many people had died to write all of the names on a single structure, like a war memorial.

His own suggestion – which he created in print and put up for sale to help British museums struggling during the pandemic – was a giant, gold statue of a pangolin. Scientists once thought the virus might have jumped from pangolins to humans (although many are now opposed to that suggestion) and the fantasy memorial might make people think about humanity’s relationship with animals, Deller said.