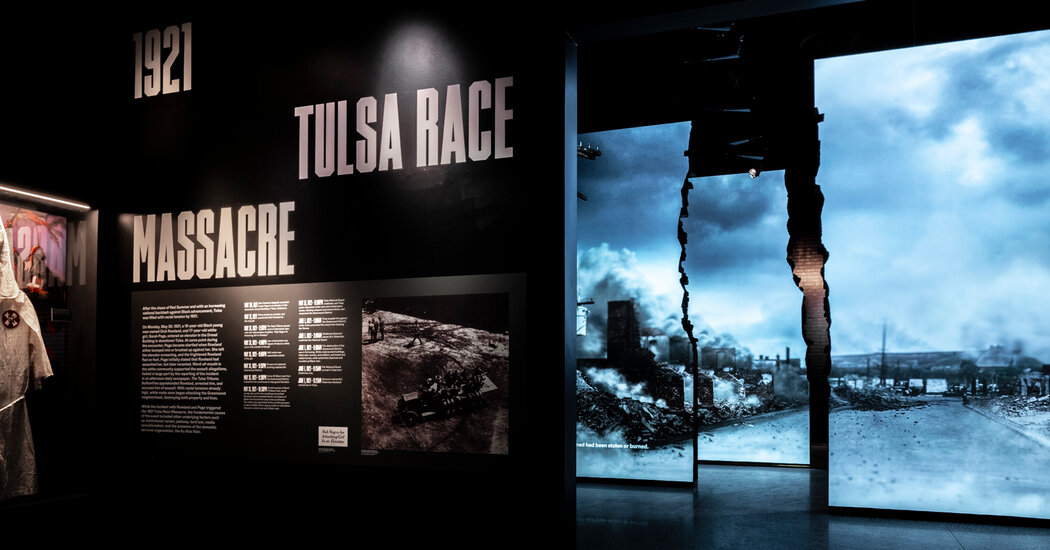 TULSA, okla. – How do you best remember epochal heroes and events? You put up a statue, put up a plaque, right? But history is not contained in objects. It’s a slow, leaky, dirty bomb explosion. An event like the murder of George Floyd may look like a sudden flame that lit a fuse, but in fact that fuse has been and has been and will continue to unwind and flare up and smolder for generations.

Some of our most interesting new historical monuments seem to target this dynamic. They take the form of museums: walk-in, multimedia, context-rich spaces. Recent examples include the Mississippi Civil Rights Museum in Jackson, which debuted in 2017, and the Legacy Museum: From Enslavement to Mass Incarceration in Montgomery, Ala., Which opened the following year. Here in Tulsa, another museum-than-memorial has just been added to the census.

It’s called Greenwood Rising and is devoted to three interlocking narratives: the long history of racial violence in the United States; the story of a black community who for a while managed to avoid this violence; and the story of what happened when that violence finally subsided.

For two consecutive days in the late spring of 1921, Tulsa hosted one of the largest and deadliest episodes of white-on-black terror ever recorded in the United States. After rumors spread that a black man attacked a white woman downtown, an armed white mob stormed into the then affluent African-American neighborhood of Greenwood and set it on fire. The entire district – around 35 residential and commercial blocks – was leveled. Up to 300 black Americans were killed and nearly 10,000 were left homeless.

Then the massacre fell off record for almost a century. For various reasons – trauma, shame, moving – the people who experienced it fell silent. Politicians didn’t mention it. Schools didn’t teach it. It has only recently been seen again, particularly as dramatized in the 2019 HBO series “Watchmen”. And as the 100th anniversary of the attack drew near, Tulsa decided to recognize and commemorate it. A 1921 Tulsa Race Massacre Centennial Commission was established, with the Greenwood Rising Museum as a final project.

The work of the New York design office Local Projects and Selser Schaefer Architects, Greenwood Rising is located in the center of the still existing North Tulsa district. Although no buildings from before 1921 survived the racist pogrom, two defining landmarks remained near the museum: a railway line that drew a line between white and black Tulsa, and an elevated road built in the “urban” city became renewal ”in the 1960s, cutting its way through the then revitalized but struggling Greenwood like a wound.

Though the neighborhood was originally shaped by Jim Crow’s segregation, its early black community – which included lawyers, doctors, educators, and real estate developers – turned racial exclusion into corporate gold. At the beginning of the 20th century, the district was self-sustaining wealthy. Booker T. Washington called it “Negro Wall Street” after an admiring visit, and Greenwood replied by naming his main public school after him.

The opening galleries of the museum called “Greenwood Spirit” honor these founders with a salon of photographic portraits. And it evokes the everyday life of its citizens in a kind of hairdressing set, with swivel chairs, vintage news clips and three holographic hairdressers joking about underpinning customers, professional hopes and the growing threat of white resentment.

“The people on the other side of these tracks hate us for doing better than them,” says a barber named Jerome. “They will use our success to justify their hatred.”

The hatred was real, national, and had been for a long time. Its trajectory is depicted on the walls of a gallery called “Arc of Oppression” in a timeline of devastating images and objects: slave shackles from the 19th century; a photo of a black chain gang; another of a lynching; a whip; and a Ku Klux Klan robe and hood.

(The reverberation lasted decades: Brady Street, which runs through Tulsa’s current downtown arts district, was named after Wyatt Tate Brady, a Tulsa founder and member of the Ku Klux Klan, voted to keep the name but namesake to Mathew Brady, the Civil War photographer.)

The timeline and barbershop installation, with its references to daily life in Greenwood, provide context for the multimedia centerpiece of the museum, a filmed replica of the 1921 massacre projected onto floor-to-ceiling plinths with an audio track derived from reports from survivors of survivor die Catastrophe.

Had Greenwood Rising been conceived simply as the museum equivalent of a docudrama or a memorial to a disaster, its mission would likely end here with a climax that has gone from virtually unknown in its centenary year to the equivalent of a sensation in recent years News filled with a visit by the US President to a disaster site. (Mr. Biden toured the district a few days ago without stopping at the not yet fully completed museum. Later, an inauguration ceremony was held there in the presence of more than 100 descendants of massacre survivors.)

In fact, about half of the evocation of this event comes in the museum. There is a lot more material to see and read in galleries that trace the neighborhood’s history to the present.

What we get first is a kind of resurrection narrative, one about a community that physically reassembled itself after unspeakable destruction, despite roadblocks being raised. Tulsa city commissioners issued fire ordinances banning reconstruction. Insurance companies owned by white people refused to compensate for property lost in a so-called “Negro uprising”. Appeals by Black Tulsans to the US government for redress were rejected and unsuccessful. (The fight for them continues today.)

Yet the neighborhood did indeed rise and prosper; a collection of shop signs from the 1940s testifies to a lively commercial and cultural revival, as does a shout out in the form of a second portrait gallery for its charismatic makers, including musicians, writers and preachers. (For more such material, visit the local archival Greenwood Cultural Center, which has made major loans to Greenwood Rising and is currently exhibiting selections from the Kinsey African American Art & History Collection.)

A slow decline began in the 1960s. The reasons were varied and complicated. As in the Bronx in the same decade, “urban renewal” targeted black and immigrant neighborhoods, locking them up and tearing them apart. Greenwood was one. At the same time, the legal end to segregation weakened the unifying impulse that once helped create a solid black and proud socio-economic enclave.

In the final gallery, “Journey Toward Reconciliation”, we move into the present and swap a well-known, image-intensive museum experience for a participatory one. Most of the images here are texts that hang on the walls, starting with two questions: “How do we dismantle systems of anti-blackness? How can we come together as a community? “

Lists of additional questions address specific issues: educational inequality, criminal law reform, redress, and – directly relevant to Greenwood in 2021 – gentrification. Together they should stimulate the audience to reflect and interact, transform the museum into a social space, a mixture of public forum, classroom and therapy session.

For visitors who are used to the conventional “don’t talk, don’t touch” museum model or who are used to the memorial as a statue or plaque – and there are several such monuments in the nearby John Hope Franklin Reconciliation Park – this flowing environment can feel awkward or negligible . From my point of view, it is crucial to define what can be both a museum of history and a monument of history.

Museums are valuable insofar as they combine the past with the present and illuminate and evaluate both. In Greenwood Rising, the connections are exposed and we are asked to ponder to recognize that the 1921 white-on-black violence is still with us and that black disenfranchisement is entrenched like racism. The very presence of this museum in a neighborhood that is still predominantly black but now minimally black-owned is a reminder of what a struggle the early Greenwood uprisings were and what a struggle today.

And there is a riot going on in this neighborhood, in this city and in this country. You can read it symbolically in the fact that Greenwood Rising exists in a larger context, in a deep red state and in a city where Donald Trump held one of his first mass rallies after the coronavirus shut down most of the country.

Changes happen, nowhere near enough, or strong enough, or anything enough, but they are there and they are as hell complicated. We need museums that explain it, good and bad, every now and then, and monuments that honor and highlight it. Greenwood Rising does some of that.

Palestinians Lastly Have Vaccines. However Will Individuals Take Them?