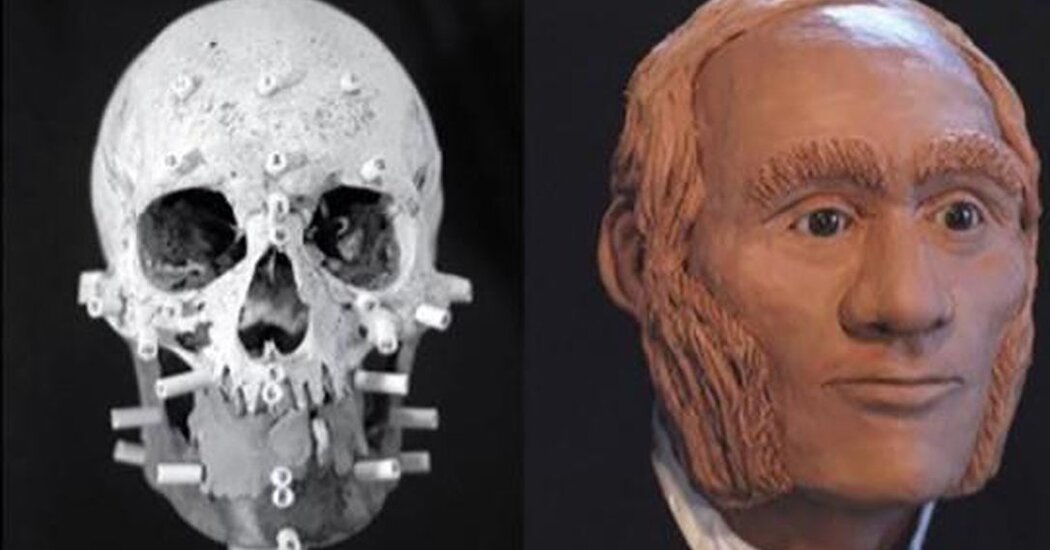 On July 9, 1845, two months after leaving Greenhithe, England, Warrant Officer John Gregory wrote a letter to his wife from Greenland describing his first sighting of whales and icebergs.

Gregory, who had never been at sea before, was on board the HMS Erebus, one of two ships that sailed in 1845 on Sir John Franklin’s expedition to the fabled Northwest Passage, a sea route through the Canadian Arctic that was to serve as a trade route to Asia.

The disaster struck. The Erebus and the HMS Terror got stuck in the ice in Victoria Strait off King William Island in what is now the Canadian area of ​​Nunavut. In April 1848, the survivors – Franklin and nearly two dozen others had already died – set off on foot to a trading post on mainland Canada.

All 129 explorers eventually perished and succumbed to brutal blizzard conditions and sub-zero temperatures. The doomed expedition lingered in the public imagination – inspirational fiction by Mark Twain and Jules Verne, and more recently the 2018 AMC series “The Terror” – fueled in part by rumors that the crew had resorted to cannibalism. The wreck lay quiet until 2014 when a remote-controlled underwater vehicle captured the silhouette of the Erebus near King William Island. Two years later, a tip from a local Inuit hunter led to the discovery of terror in the freezing waters of Terror Bay.

John Gregory’s descendants would not learn of his fate until more than 175 years after he mailed the letter home from Greenland. Some sailors had been identified after being found in marked graves. But recently, Gregory’s DNA and a sample of an offspring born in 1982 were compared, making him the first discoverer of the voyage whose remains were positively identified by DNA and genealogical analysis – a process similar to that used in recent years to identify murder suspects is and victim in cold cases.

Last week, Jonathan Gregory, 38, who lives in Port Elizabeth, South Africa, received an email from researchers in Canada confirming that the cheek swab he sent them confirmed that he was a direct descendant of John Gregory was.

He had heard of his family’s connection to the expedition, but “it was really theory” until the DNA match. (Although passing Joe, the resemblance between their names “all makes sense,” said Mr. Gregory.)

A British Columbia relative who had never met Mr. Gregory posted a Facebook message in 2019 after receiving a request from researchers requesting descendants of sailors from the expedition to send in DNA samples.

“I took the plunge,” said Mr. Gregory in a telephone interview on Wednesday. “For us this is history.”

Douglas Stenton, a professor at the University of Waterloo and researcher on the project, said the team, which included researchers from Lakehead University and Trent University, began focusing in 2008 on documenting locations and recovering new information about the expedition . In 2013, however, they became interested in the human remains and attempted to “identify some of these men who had actually become anonymous in death”.

“It really is a story of human endeavor in one of the most challenging environments in the world,” said Dr. Stenton, “which results in catastrophic loss of life for reasons we still do not understand.”

The circumstances that led to the deaths of the crews are still unclear. Researchers have continued to compile evidence of the expedition’s failure as artifacts have been found over the years.

Gregory’s remains were unearthed on King William Island in 2013, about 50 miles south of where the ships were abandoned. He most likely died within a month of leaving the ships, said Dr. Stenton – a trip that “wasn’t necessarily a pleasant trip in the truest sense of the word”. Gregory was between 43 and 47 years old when he died.

Dr. Stenton said it was a relief to finally name one of the sailors – and a face, since the researchers were able to reconstruct what Gregory might have looked like – because details about the expedition “have remained elusive for 175 years. “

In the past eight years, according to Dr. Stenton, the team’s researchers were “very hopeful” that they could match a sample from a living offspring to a sailor from the pool of DNA they had collected from remains. The first 16 samples they received did not produce a match, which made the Gregory pairing “very enjoyable,” he said.

Although the identification didn’t change the history of the expedition, Dr. Stenton: “The more people we can identify, the more useful information could emerge that could help us better understand” what happened to the discoverers.

He said he was grateful for the families who submitted DNA, whether they matched or not, and added that he was delighted to share details of the seaman’s final years with Gregory’s family. He informed them that Gregory was not alone when he died as the remains of two other sailors were found in the same location.

“It’s a creepy feeling about everything,” said Mr. Gregory, “but at the end of the day I suppose it’s closure.”