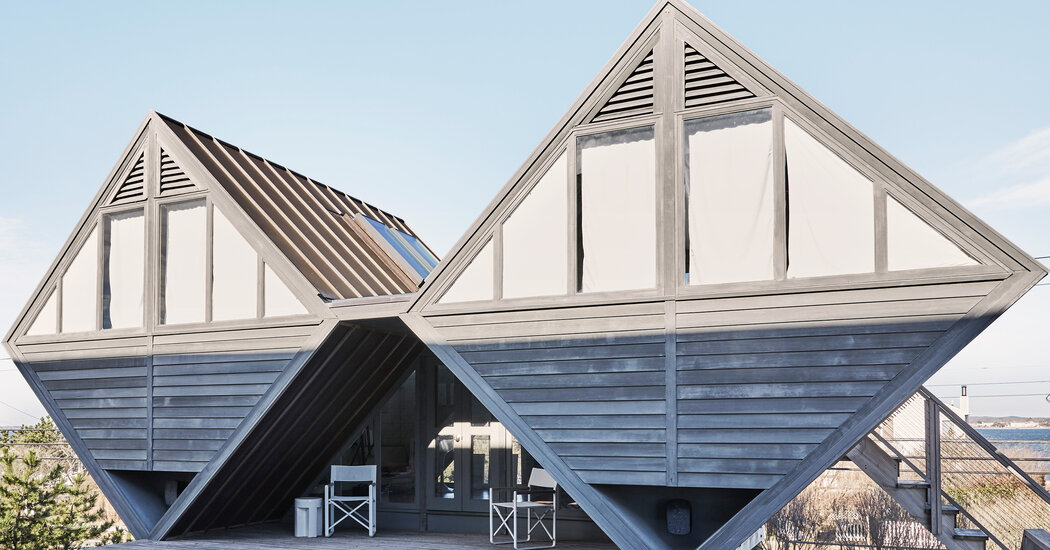 Often referred to as the Architect of Happiness, Andrew Geller is best known for designing a handful of small, one-of-a-kind homes that perched on the shores of Long Island, NY in the late 1950s and 1960s. There was the Grasshopper from 1966, an abstract wood-and-glass structure that, with its sharp angles, looked like it was jumping off the beach in Southampton. the Milk Carton (1958), a rectangular box rotated 45 degrees to the sea in Ocean Bay Park on Fire Island; and the Double Diamond (1959), made from two congruent 17 foot high cedar cubes balanced on their edges, resembling binoculars pointing towards the horizon in Westhampton Beach. In the latter house – one of the few Geller projects that is still standing – the gap between the two pods is filled with triangular windows on both the north and south sides, and a tall brick chimney covered with swirling sky blue and white stripes is painted, the facade rises like a candy cane. These buildings were celebrated not only for their playfulness and practicality – Geller, who died in 2011 at the age of 87 believed that houses had a better chance of weathering storm winds with their leading edges facing the water – but also for their accessibility Most of his designs cost less than $ 10,000.

“These” playhouses for the summer “, as Geller liked to call them, offered the opportunity to express yourself and to try out your own ideas,” wrote the architectural historian Alastair Gordon in his 2003 book “Beach Houses”, a monograph on the architect who Sketched Cottages by the Sea to break up the monotony of his day-to-day work building shopping malls at New York design firm Raymond Loewy & Associates. Gordon continued, “These little dream homes inspired self-expression and personal freedom” for those fortunate enough to live in them.

The current resident of Double Diamond, artist Jason Bard Yarmosky, needed just that. New York native Yarmosky, 33, made a name for himself with his hyper-realistic oil paintings and drawings of his grandfather and maternal grandmother – he played a baseball bat in a tutu like in “Ballet” (2012) or in a Wonder Woman-style leotard printed with stars, as in “The Wanderer” (2015) – works that explore ideas of self-identity and the passage of time. But last April he lost his 92-year-old grandfather Leonard Bard to illness. And with his grandmother Elaine, who died of Alzheimer’s in 2018, Yarmosky was alone and without a muse.

Overwhelmed with grief, he did not paint for a month. It wasn’t until October, when he moved from his Brooklyn home to his cousin’s beach house, which has been in Yarmosky’s family since construction for his relative’s parents, Arthur Pearlroth and Mitch Rein, that he felt motivated to take risks back to work . “It has become my diary,” he says of the Double Diamond, in which he has created dozens of abstract paintings in oil and wax over the past five months, some of which feature a silver skeletal figure that appears to be looking for something that is no longer there physically. “I put all my notes and ideas, whether they were paintings or writings, on the walls all over the place, and then I take them off and put others up,” he says. “I’ve found a space where all my thoughts can live.”

The 600-square-foot replacement home was a perfect canvas – every cedar wall, cabinet, and door is the same shade of light driftwood gray, and the only seating is a hanging, pod-like wicker chair and a pair of light brown padded benches that fold into the walls of the Living area that forms the hull of the diamonds – but the building’s eccentric angles make up the structure anything but easy; There are many secret rooms in its niches. Like a boat a lot of the living is should take place outdoors, and the washing and sleeping areas are small and hidden and accessible through cubic doors. In the 350 square meter main room is the brick wood fireplace, the only source of heat. a white, round pedestal table; and an open kitchen niche with built-in shelves and new retro-style appliances, including a mint green refrigerator. The closed pods on either side of the house contain a total of three bedrooms with two queen-size beds and a row of narrow bunk beds – Geller called them “bunk rooms” because of their small footprint and cramped headroom. and a bathroom, the wooden shower cubicle of which leads through a hatch down a steep staircase to the dunes. A shower that leads directly to the outside is a signature shared by most of Geller’s residential projects. Although its structures varied widely in size and shape – he had a rule that it would never repeat itself – they were all designed with one thought in mind: the water.

When it was built, the house was barely 100 feet from the beach, but in 2015 the family hired eco-conscious design firm Cookfox Architects to move it back behind the coastal erosion hazard line – a move that secured the historic structure from the beach elements, but also the To enable the construction of an additional 300 square meter residence on the property, which is more like the oversized neighboring houses. (Although the second house complements its older counterpart with its cubic shape, the two by four large wooden pool deck, and the hand-cut cedar plank facade.) Still from the Double Diamond, which received a new copper roof and was built over the dunes at its original height (in the course years ago its base was buried under 10 feet of sand) the Atlantic remains clearly visible – and has found its way into Yarmosky’s painting.

On the northeast wall of the main room, where the best light can be found, Yarmosky has hung two of his abstract oil and wax works, in which a man is swimming in the sea and holding his arm Water and his eyes wide open and intent on his task. Across the room are two other paintings: a sun breaking through a gray sky over the waves and a moon dangling in the dark. Next to the latter is a poem by Yarmosky that ends with: “As long as you look up from time to time, you will see that time sleeps in the sky too.”

Nearby are some black and white depictions of a Yarmosky pine that was found on the roadside after Christmas. He decided to take it to the beach and tape it on the property’s dock and watch saltwater waves crash on it – just for the pleasure of seeing it, he says. Living in the home has clearly created space for inspiration that arises in unexpected ways and fills his work with depth and spontaneity. “I was able to deal with loss and grief in a room that didn’t put me under pressure,” he says, “and that allowed me to enjoy the process of making art in a new way. It was a blessing. “