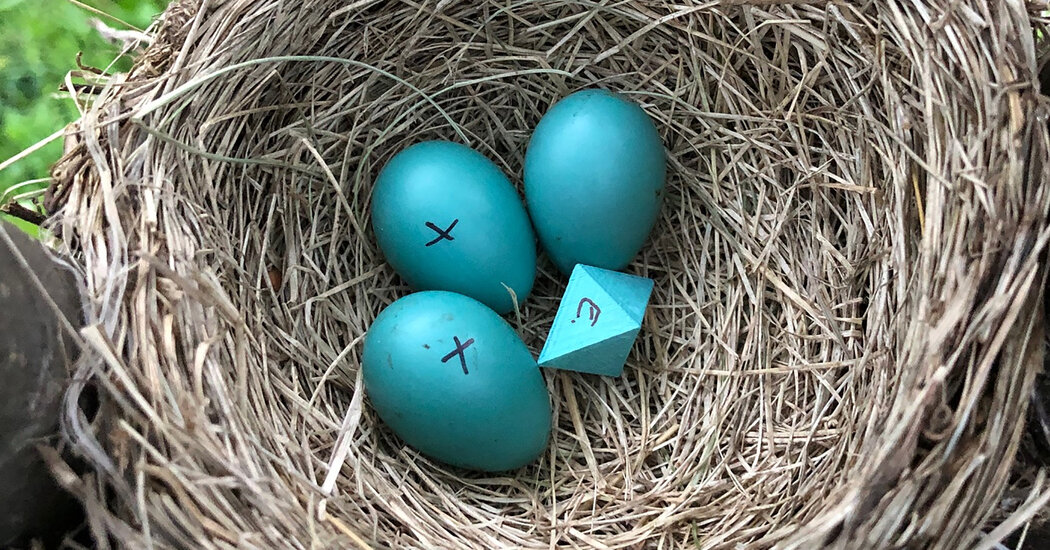 Last spring, robins that lived on a tree farm in Illinois sat on unusual eggs.

In addition to the usual bright blue ovoids they had laid, there were some oddly shaped objects. Although they were the same color, some were long and thin and stretched into pills. Others were downright pointed – so angular that they looked very little like eggs. If robins had played Dungeons and Dragons, they might have thought, “Why do I have an eight-sided die in my nest?”

The answer: evolutionary biologists have measured how birds decide what belongs in their nests and what is an invasive piece of trash to throw away.

Thanks to the results of this study, published Wednesday in the Royal Society Open Science, we now know what the robins thought of the eggs, which were made of plastic and 3D printed by the laboratory of Mark Hauber, a professor of animals were conduct at the University of Illinois, Urbana-Champaign and a fellow at the Hanse-Wissenschaftskolleg in Delmenhorst.

He and his colleagues reported that the thinner the fake eggs became, the more likely the birds would remove them from the nest. But strangely enough, the robins were more careful when it came to throwing away those pointed items like the eight-sided cube that was closer to their own eggs. The results suggest that birds use rules of thumb that are not intuitive to humans in deciding what is detritus and what is valuable cargo.

It’s not as uncommon as you’d think for robins to find foreign bodies in their nests. They are home to cowbirds, a parasitic species that lays eggs in other birds ‘nests where they hatch and compete for food with robins’ own offspring. When faced with a cowbird egg that is beige and larger than its blue ovals, parent robins often push out the parasite’s eggs. That makes the species a good candidate for testing exactly what matters when it comes to distinguishing their own eggs from other objects, said Dr. Hood.

The researchers 3-D printed two sets of decoys. One group became increasingly thin and the other increasingly angular. They carefully painted the robin egg blue so birds could only rely on the shape to tell the difference. Then they put those fake eggs in nests that were scattered around tree farms. When they revisited the nests, they kept track of which molds had been removed by the nest owner.

But the pointed objects were nowhere near as often rejected. In fact, almost every time, only the most pointed lure, the eight-sided die shape, was pushed out.

“It was very surprising to us,” said Dr. Hood.

The birds seem to respond to variables that are important to nature. Cowbird eggs, for example, are noticeably wider than their own, so robins may have developed a keen sense of when the width is wrong.

“They seem quite reluctant to reject eggs when the variable we changed wasn’t natural,” said Dr. Hauber, referring to the angular, pointed eggs. “Robins don’t know what to do with it because they never evolved to respond to it.”

And instead of accidentally throwing away one of their own eggs, they dropped it.

Recognizing what yells “egg” to a bird is a fascinating way of what the world looks like to other animals, but it can also be useful in future studies of birds’ brains.

“Like humans have a face recognition center in their brain, birds have an egg recognition center in their brain,” said Dr. Hood. He hopes MRI studies can help uncover what is going on neurologically when birds see such an important object. These peculiar plastic eggs, increasingly different from those of the robin, can be valuable tools for laboratory experiments examining what birds do when they look at their nests.

Are We within the Metaverse But?